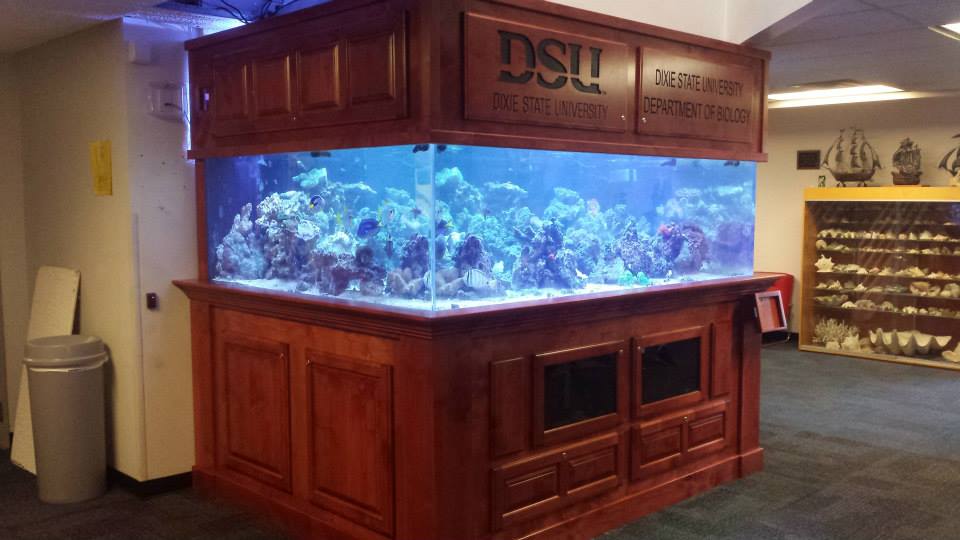 Dixie State University’s old science building was home to the biology department’s fish tank. With the remodel of the building, the fish tank can no longer be found on campus. Photo courtesy of DriftWood Aquarium.

The closure and remodel of the old science building at Dixie State University forced the fish tank to be unexpectedly removed.

With the opening of the new Science Engineering and Technology (SET) building at DSU, the old science building is being repurposed as the new home for the College of Education.

In the old science building, there was a fish tank home to a variety of sea life over the past 10 years. The tank was home to Jerry, a sea cucumber, that was selected as the biology department mascot.

The animals in the tank were brought in from local pet shops and aquariums.

The fish tank was made possible because of the funds from a professor of biology Karen Bauer and the biology department. It was a resource for the department and students.

“I am very unhappy to see the fish tank leave because it had great value for educational purposes and gave students the opportunity to observe the animals up close,” Bauer said.

The marine life biology course and behavioral science students would occasionally observe the fish tank during the semester.

“The marine biology class travels to the Pacific Ocean as part of the class, and now there will be more time devoted to that [trip] rather than the aquarium,” Biology Department Chair Aaron Davis said.

The fish tank does not have a place in the new SET building and will not be kept as part of the remodel of the old science building.

“We did look at finding a new building for it and that just wasn’t an option,” Davis said. “The fish tank is very large and very heavy and there are space requirements, so there wasn’t room to house it elsewhere.”

DSU has found a new home for marine life and is planning to convert the money raised from selling the tank into scholarship funds for future students.

The fish tank may no longer be on the DSU campus for future students to see, but past and current students will remember its impact.

“When touring the DSU campus, seeing the fish tank in the science building made me realize I want to go into marine life biology,” said Isabelle Moreno, a freshman biology major from South Jordan.