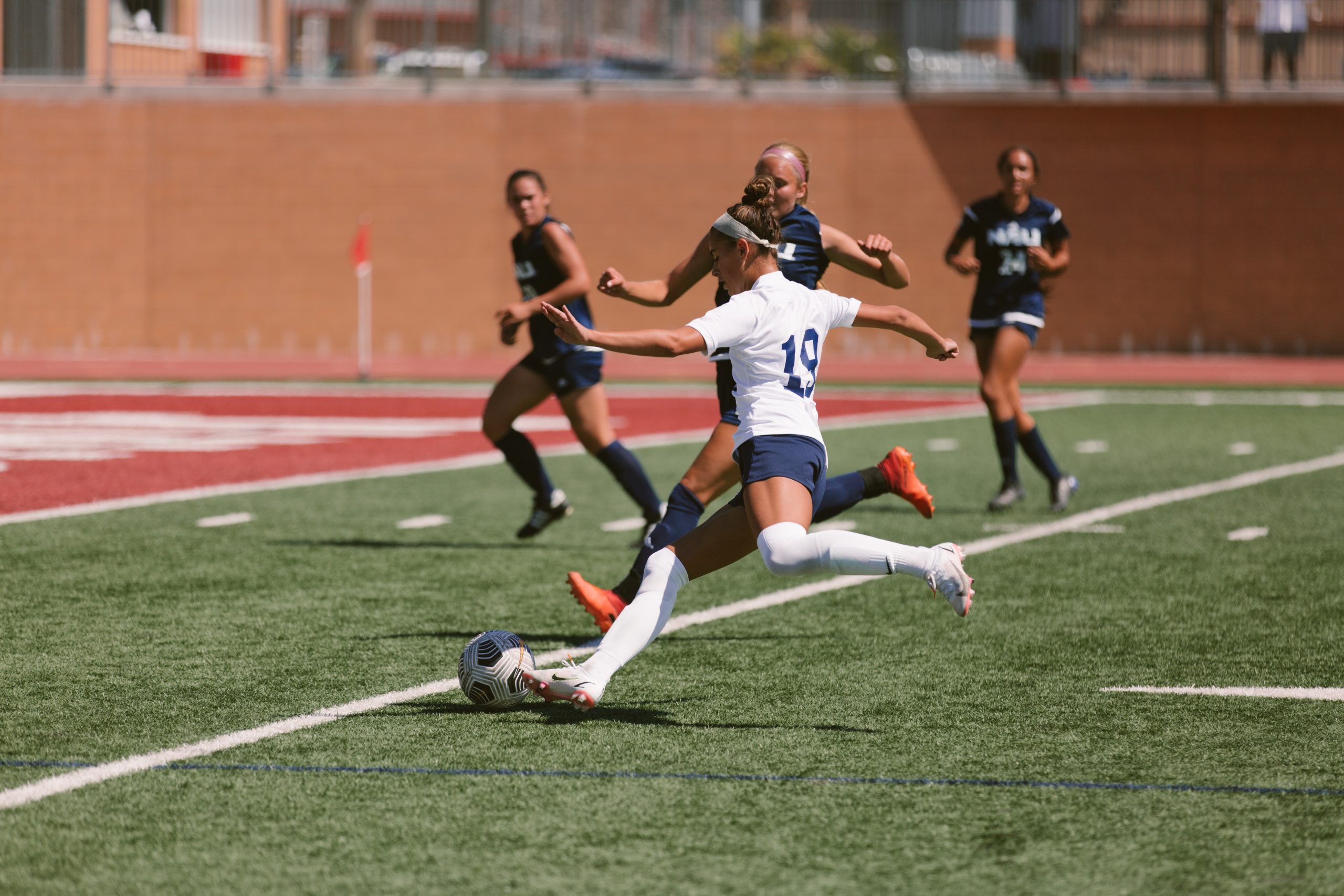 Kalea Woodyatt, a freshman business management major from Layton, shoots for the goal in Sunday's game against NAU. Photo by Emily Wight.

A Dixie State University freshman soccer player is quickly establishing herself as the player to watch this season.

Kalea Woodyatt, a freshman business management major from Layton, is a midfielder for the DSU women’s soccer team. Woodyatt said she was drawn to the university because of its location and the strength of the soccer program.

“Our coaching staff is amazing, so that really drew me into the soccer program,” Woodyatt said.

Woodyatt is a starter for the team and has racked up 273 minutes of playtime during the five games she has played in this season. Over the course of those five games, Woodyatt has had four shots on goal, one assist and two goals.

Head coach Molly Rouse said it is exciting to see the significant impact Woodyatt has had on the team in such a short amount of time. Woodyatt’s tactical strengths and skill set coming into the program enabled her to influence the game from an attacking perspective, Rouse said.

“Your freshman year is a really exciting time, and it’s a fun time to be able to step into kind of a more impactful role,” Rouse said.

Woodyatt said she is looking forward to seeing how the team progresses over the next few years and what traditions she develops with her teammates.

“I’m excited to shape the soccer program because our coaches are still new and we’re still trying to build team chemistry,” Woodyatt said. “[This season is a] really exciting thing to be a part of because I get to be a part of something new and developing.”

Outside of athletics and academics, Woodyatt still manages to find time for fun. Woodyatt said she enjoys hanging out with friends, going roller skating, listening to music and taking advantage of hiking opportunities in the area.

“I like to explore, so this area is a good place for that,” Woodyatt said.

Jaci Cook-Dandos, a senior biology major from Farmington, is one of Woodyatt’s teammates. She said Woodyatt is not afraid to put herself out there and be silly. Dixie Idol is a tradition where freshmen players crank music up high in their headphones and sing the song playing in their headphones. Cook-Dandos said freshmen are usually scared or shy while singing, but not Woodyatt.

“She was just like lighting it up, she was dancing, she was singing so loud,” Cook-Dandos said.

Woodyatt is serious when she needs to be during games and she “turns it on” while she’s playing, Cook-Dandos said. However, Woodyatt makes time to be funny and goof around.

“She’s definitely someone you can approach on or off the field and she’ll have something kind to say or something funny to say,” Cook-Dandos said. “She doesn’t take herself too seriously at all.”

On the field, Rouse said Woodyatt has a strong technical foundation that allows her to manipulate the game. Off the field, Woodyatt has established herself as one of the players who run the team’s social media accounts.

“She’s striving to be an influencer on TikTok,” Rouse said.

“She’s a very fun individual who you can tell is enthusiastic about this environment and really excited to be able to help the program continue to grow at this level,” Rouse said. “She’s somebody on and off the field, we’re very excited about being in the program.”

The women’s soccer team plays their next home game against Utah Valley University on Oct. 16 at 1 p.m.