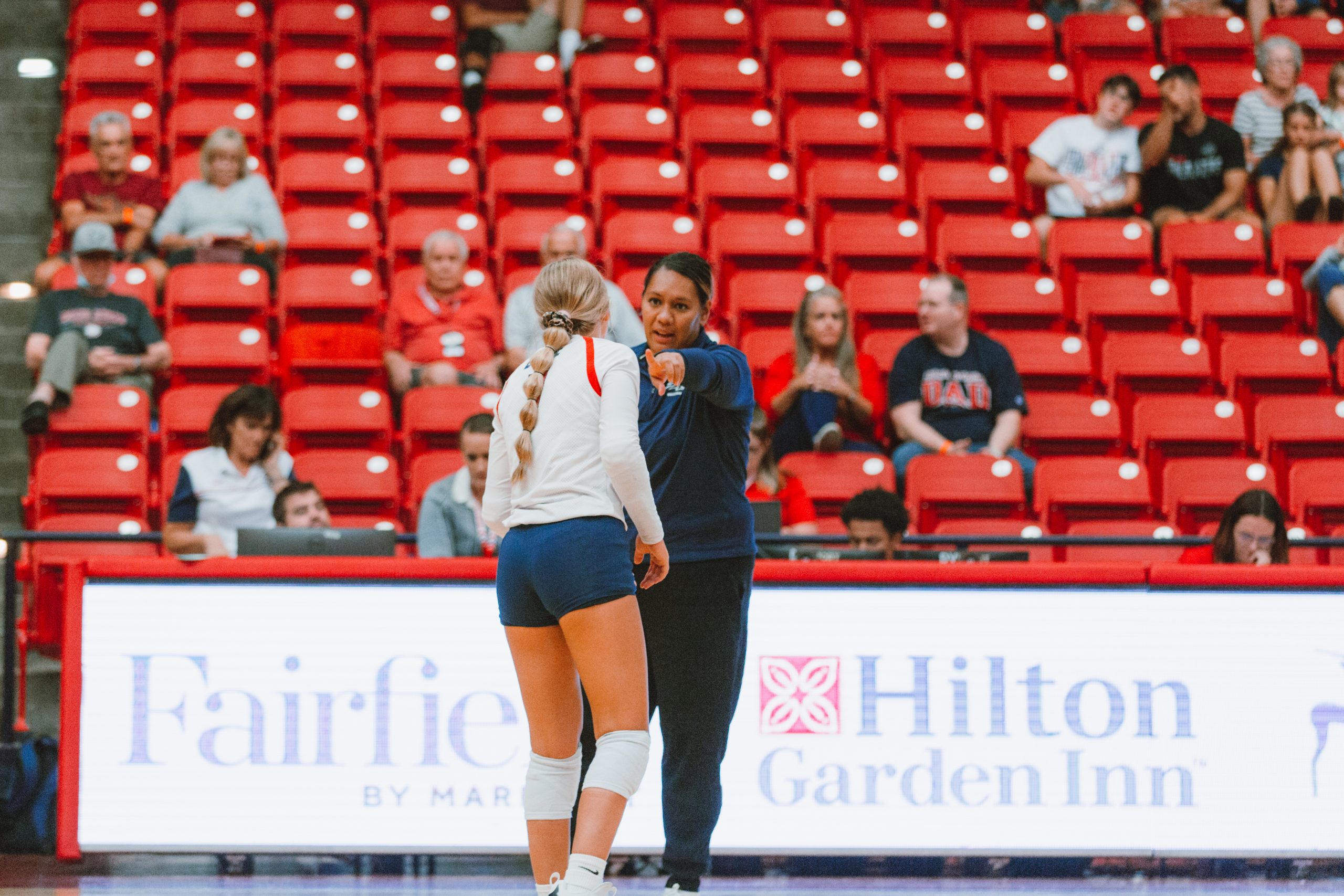 It’s never easy to do something for the first time. As Dixie State University embarks on this 2021 volleyball season, it will do so under direction of first-time head coach Camilla Hafoka.

DSU women’s volleyball takes their first win of the season with new head coach Camilla Hafoka. Hafoka’s been in the volleyball scene since she was young and has always been determined to continue on that path.

“My parents were coaches [and] they coached me in volleyball since I was young, my passion of volleyball started from them,” Hafoka said. “I saw the differences they were making in young lives and I wanted to be a part of that.”

Oregon State University is where Hafoka began her involvement with university level volleyball. She attended OSU on a volleyball scholarship, and she said this is where she had the opportunity to compete against some of the best volleyball players in the world.

Hafoka said: “After I graduated from OSU, I moved home and coached under Wilfred Navalta at Brigham Young University of Hawai’i. He [had been] coaching there since my mom played for him. My mom took over the BYUH program after Navalta retired and hired me as her assistant. That year we took our team to the National finals.”

Hafoka then had the opportunity to help with Washington State University volleyball camps while her husband finished his Ph.D. Her husband, Moana Hafoka also works at DSU as an assistant criminal justice professor. They have been in the St. George area since 2019 and this is when Hafoka started as DSU’s women’s volleyball team assistant coach.

“After [coach Felder] resigned, I applied for the [head coach] job and I’m grateful for the opportunity to be a part of something great,” Hafoka said.

There is no question about the experience and involvement Hafoka has and this shows in her coaching skills at DSU.

“She [Hafoka] was our assistant coach last year, so she knew our individual strengths and weaknesses and therefore was able to jump in very effectively from day one,” said Kate Hardy, a freshman dental hygiene major from Fruitland, Idaho. “It was a very smooth transition and has benefited the team immensely.

Hafoka said she was able to bring on new staff that support her vision for the future of the team. This was the opportunity to be part of DSU as it is growing so quickly.

“We are here for a reason and coach implements this type of mentality to help us become better athletes on and off the court,” said Jordyn Nelson, a senior exercise science major from Phoenix. “She takes the game of volleyball further than just the physical side and brings in the psychological side of it.”

Nelson said her ways of coaching are unique as she wants to not only get practice time in, but also educate each of the players about the game

Nelson also said each week they break down the fundamentals of the game so each player knows the simple skills in order to succeed. This is beneficial to the team as they are able to gain a better knowledge of the game and what Hafoka wants to see in future games.

Nelson said: “She connects with us on a personal level and wants to have a relationship with each individual player. At the same time, she is a constructive coach and will give you direct feedback. She finds the balance of each characteristic and helps us achieve our goals.”

DSU earned its first win of the season last week against SUU, and are on the road facing up against Chicago State Oct. second.