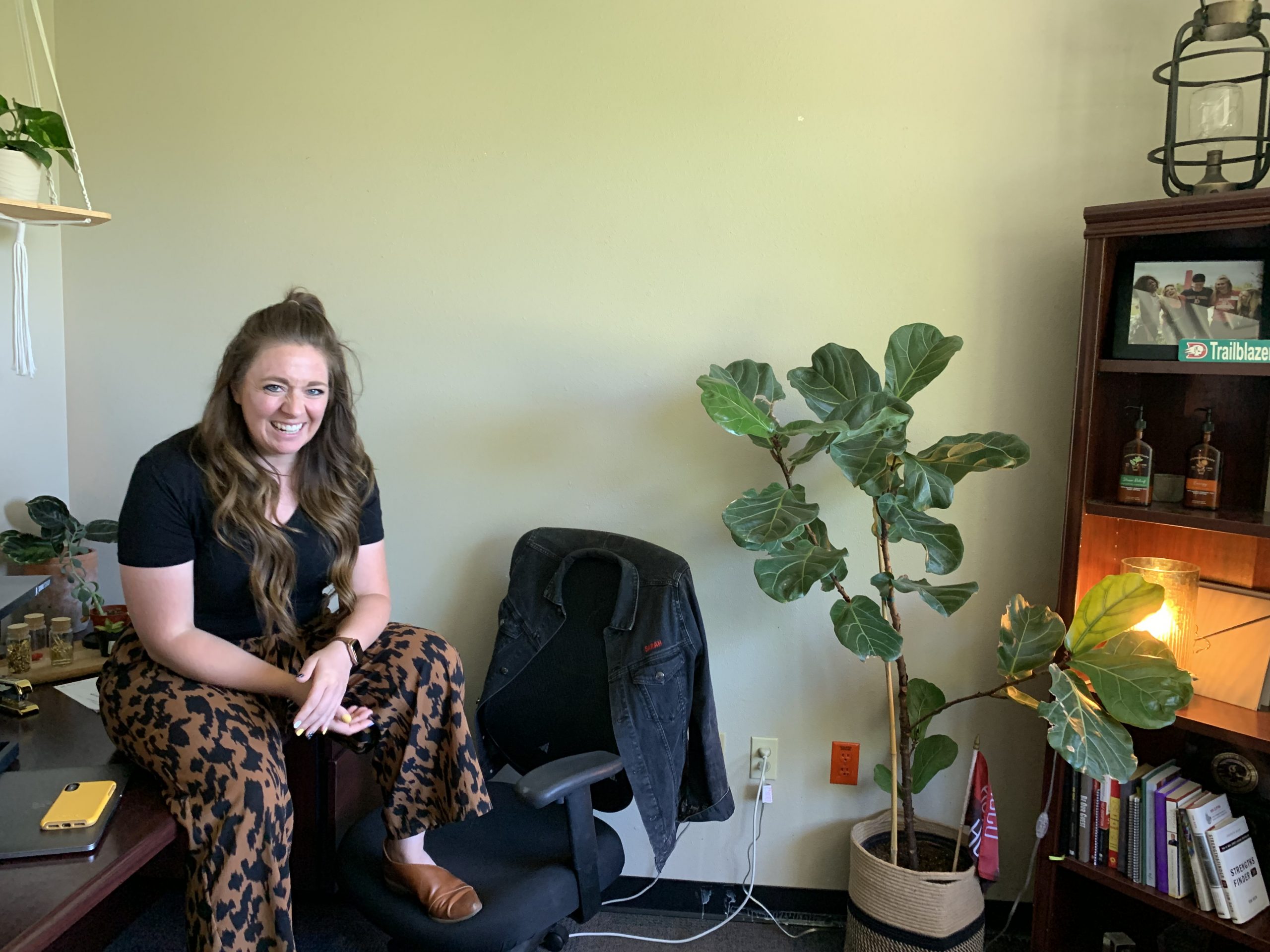 DSU Alumna Sarah Ramaker returns to DSU as The Student Life Coordinator. She graduated with her Bachelor of Science majoring in dance. Photo by Izzy Johnson.

The Student Life Coordinator Sarah Ramaker has a unique tie to campus as a former Dixie State University student.

Ramaker is originally from Midland, Michigan began working at DSU in January 2020. Ramaker graduated in 2017 with her Bachelor of Science majoring in dance. She came to DSU as a non-traditional student when she was recruited because of her work with The Young Americans and her well-known work ethic.

“My education through dance has taught me many tangible life lessons and is used more than you would think in the professional world,” Ramaker said.

“Student government was my jam,” Ramaker said. “I saw the influence I could make grow expediently when I got involved.”

Ramaker oversees the student life and marketing branch at DSU now and runs the Miss Dixie Scholarship Competition, D-Queen and Mr. Dixie. Ramaker loves to be heavily involved with campus life as it gives her the opportunity to touch base with a lot of students.

Morgan Olsen, a junior communication studies major from Spanish Fork, who is also Miss Dixie State, said Ramaker made it possible for her to accomplish her goal to do a campus-wide service project.

“Sarah helped me make my ideas become a reality,” Olsen said. “She allowed me to gain experience of putting on a large event.”

Ramaker was also honored to be a top-five finalist for the 2021 Dixie Awards for “Staff of the Year – Rising Star.” This award is for staff who have been in their position at DSU for less than three years.

“The Dixie Awards mean so much to me,” Ramaker said. “I was nominated and won a few awards in my time as a student. Coming back and being nominated in my first year as a professional felt full circle.”

Ramaker has been dancing since she was 4 years old; when she got to DSU she explored all forms of dance the university had to offer.

Ramaker said in the dance program she really got to develop herself and her dance style. Dance was an enormous part of Ramaker’s life, so she knew she wanted to share her skills and give back to DSU. Ramaker then became the choreographer for DSU’s Raging Red performance group for four years.

“Sarah brought glorious technicolor to my life,” Syrett said. “She helped me achieve my goals and develop talents that I had no idea I had.”

When Ramaker was a student at DSU, the student life coordinator was her dream job. When she looks out her office window, she can see everything she was involved in at DSU when she was a student.

Olson said Ramaker is charismatic, thoughtful, and caring and that she adds value to the university as she makes students feel valued and heard.

“Sarah is so much more than an adviser,” Olson said. “She allowed me to gain experience while always holding my hand, so I didn’t feel like I was on my own.”

Ramaker said her mantra with students at DSU is to make them feel valued and loved, that they have a purpose and they matter to someone. Ramaker said her job is to advise students while making sure they have what they need to ensure their dreams are coming true, so when students leave DSU they can go on and conquer the world.

Ramaker said her favorite part about her job is having the chance to work with students and helping change their lives.

“Sarah is one of the most aware and intuitive people I know,” Syrett said. “She has the gift to see others’ potential and push them to reach it.”

DSU Alumna Kodi Jo Mckinlay said Ramaker has always made sure that students have the opportunity to get involved and help students feel as if they are a part of the DSU campus.

“Sarah stands out because she knows what it is like to be a student at DSU,” Mckinlay said. “She applies her prior experience as a student to her position every day and better enhances the lives of students.”

Ramaker said she wished she would have gotten involved on campus at DSU sooner. Ramaker encourages students to get involved with any type of school-related program because it makes the student school experience so much better.

Ramaker said she is more than happy to help students find out what programs they want to get involved in on–campus and walk them through the logistics. You can reach out to her at Sarah.Ramaker@dixie.edu or call 435-652-7513.