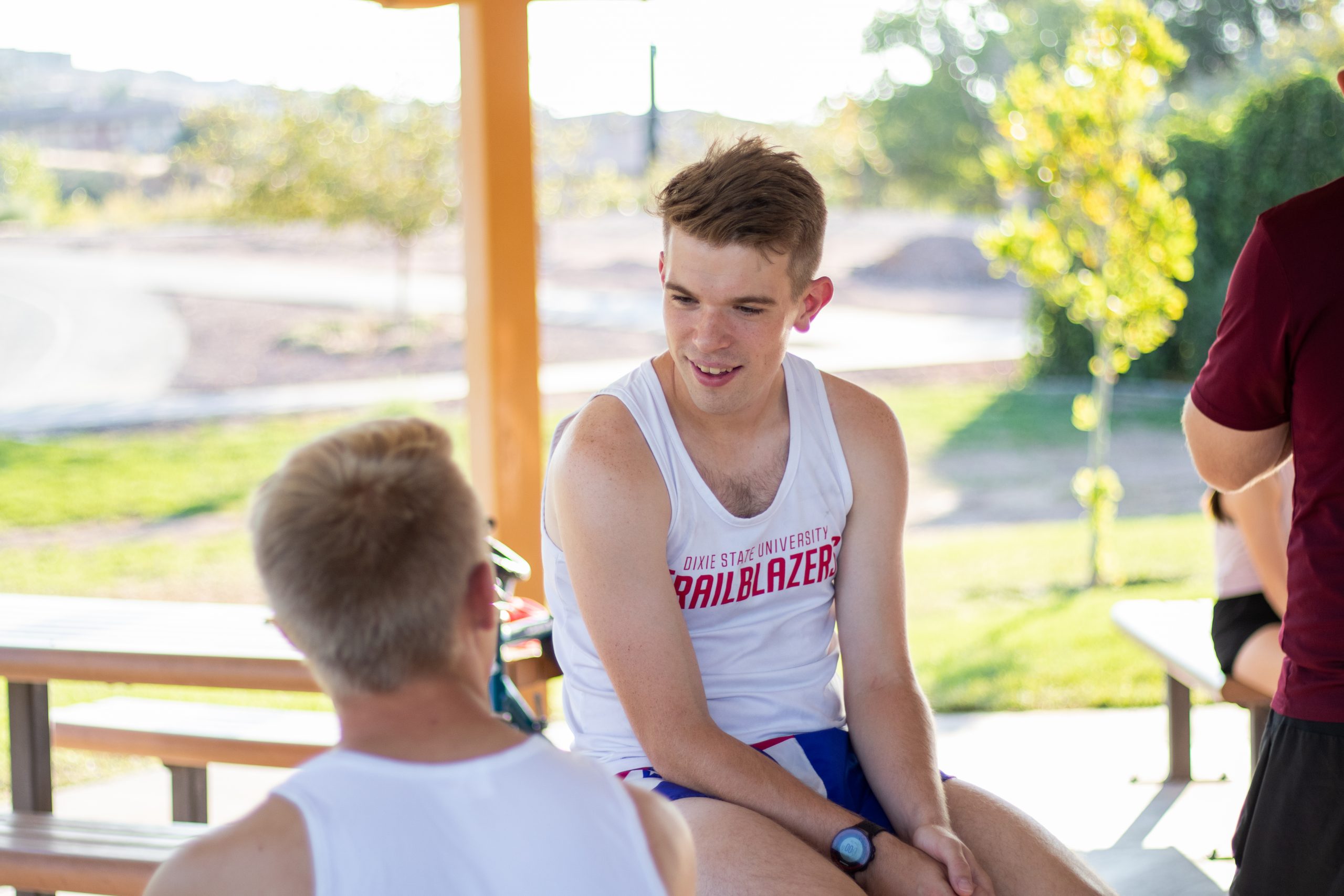 Kallen Webster, a sophomore general studies major from Kansas City, Missouri, mingles with teammates after a morning practice. Both the men's and women’s cross-country teams have had a successful start to the season. Photo by Breanna Biorato.

The Dixie State University men’s and women’s cross-country teams have their first two competitions under their belts.

The Trailblazers competed in both the Utah Valley Invitational Sep. 3 and the Brigham Young University Classic Sep. 11. Now, the standings of the event don’t tell the whole story of how the DSU cross-country team is performing.

“BYU has the best cross-country program in the nation right now, as both their men and women have won national titles in the past two years and they are currently ranked No. 1 [women] and No.3 [men] nationally,” head coach Justin Decker said. “To get the opportunity to compete against the very best is fun and a good learning experience.”

The men’s team finished third while the women’s team finished second. Understanding how the Trailblazers are making this great of an impact on a national platform this early in their Division I stage is a great success for the program.

“That’s exactly what running consists of — strength and discipline,” said Maddison Flippence, a junior exercise science major from Hyrum. “If I had to choose one strength of the team, it would be that we are a disciplined group.”

These adjectives Flippence referenced are reflective of how well the team is performing compared to how the cross-country teams have been in the past.

“We [currently] have five active runners that are on the all-time 8k top ten list,” said Kevin Kirk, a junior exercise science major from Yerington, Nevada. “Iron sharpens iron, so having a team with this amount of talent makes everyone elevate themselves to another level.”

DSU now has three weeks off as they don’t compete again until Oct. 9 at the Southern Utah Color Country Invitational. The Trailblazers will have to rely on each other to perform even better at its next event.

“These next couple of weeks of practice are going to be crucial for where we finish out the season,” Decker said. “We’re going to be hitting the workouts hard while still making sure we are staying healthy, so our runners are in peak form for the second half of October.”

Last year in the WAC championships, the women’s team finished sixth while the men finished fifth.

“I knew we had a strong returning core that keeps improving,” Decker said. “Several of the newcomers have surprised me and have exceeded expectations [as well].”