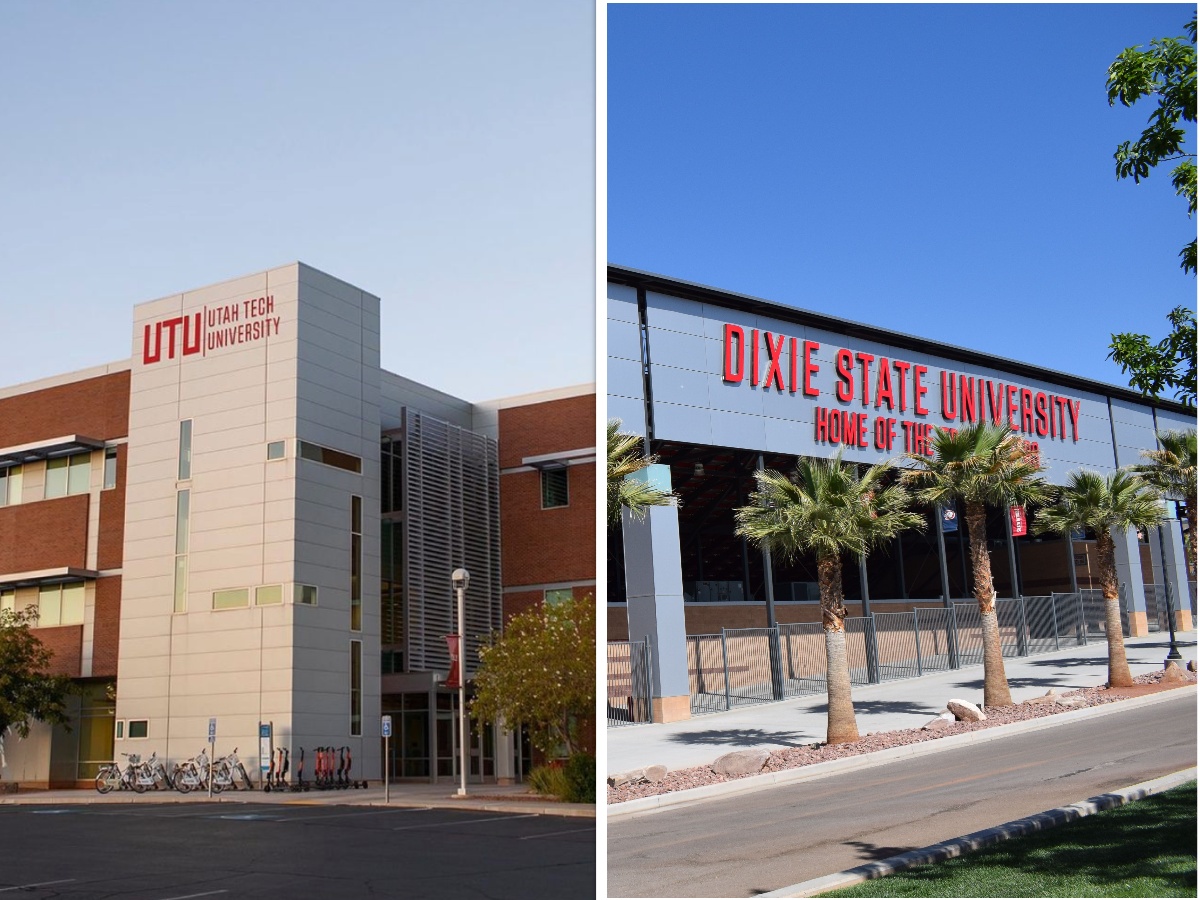 Dixie State University proposed what the rebrand for the new name would look like. Bailey Chism urges students and community members to welcome the change. Photo illustration by Bailey Chism.

The proposed new name for Dixie State University is the best thing the school could have done and the community needs to understand that.

In the last five years, DSU has added 111 academic programs, 85% of which are STEM programs. DSU has every right to use “Tech” in the new name because it fits the reputation and image the university is going for. Students and community members should understand that DSU is still growing; it needs this new name to help that process.

For the non-STEM students, it can be a struggle to come to terms with a name that doesn’t seem to represent them. As a non-STEM major myself, it took some time for me to realize what the new name means for me and the university. After thinking about the graduated students who tried to enter the work field and were denied because of the “Dixie” name brought things to light.

It’s hard to think about students being denied a job because of the college they went to, but it’s different in Utah where everyone knows Dixie. Other places won’t be so accepting, but with a name like Utah Tech University, students will have a better chance at finding a job after graduation.

“If you look at the breadth of degree programs offered at other polytechnic or technology named universities, you would find they are nearly all comprehensive like us but have a name that signals a focused mission as a polytechnic or technology-intensive university,” said Michael Lacourse, provost and vice president of academic affairs. “I believe students in all degree programs will benefit from the new university name and the additional resources that will become available to us.”

Utah Tech University is the kind of name that brings thoughts of professionalism, a chance for students to show that they come from a university that works hard.

In a study conducted by Cicero, results showed that students were struggling to find work outside of Utah because of the “Dixie” name shown on their diplomas. With the new name, students won’t have to worry about that problem in or out of the state. It’s a professional name, which will produce professional students. The workforce will welcome Utah Tech University students instead of turning them away.

“I believe the new university name will set us on a better path to serve the talent needs of the region and therefore make even greater contributions to the economic and social vitality of southern Utah,” Lacourse said.

As much as students may think the university went in blindly looking for a name, there was a lot of thought about the reputation and image students would have even after graduating with the DSU name.

The DSU administration worked hard to bring their reputation up to par and now it’s time to update the name.

While DSU is undergoing the new name change, the Board of Trustees left a note on the university website explaining the process and hopes for the university. The school still supports the “Dixie” name and will protect the “D” on the hill. DSU has plans to create a special committee to preserve our heritage and maintain traditions.

The university is still in the early stages of being a polytechnic school, so it’s the perfect time to find a name that better fits the school’s mission. Lacourse said he believes that it will take up to 30 years to fully develop as a polytechnic university, but it’s better to get a head-start on our image before it’s too late to change it.

The Board of Trustees said that of the top 100 rated universities in the U.S., more than 60 include the name of their state and many are technological and polytechnic institutions. Utah Tech University is the name that will push us to greater things.

As students, we need to think about how we want our future to be after graduation. Do we want to struggle in the work field because of the name on our diploma? Or do we want to thrive with the knowledge that our university did everything it could to make sure we’d have a good future?