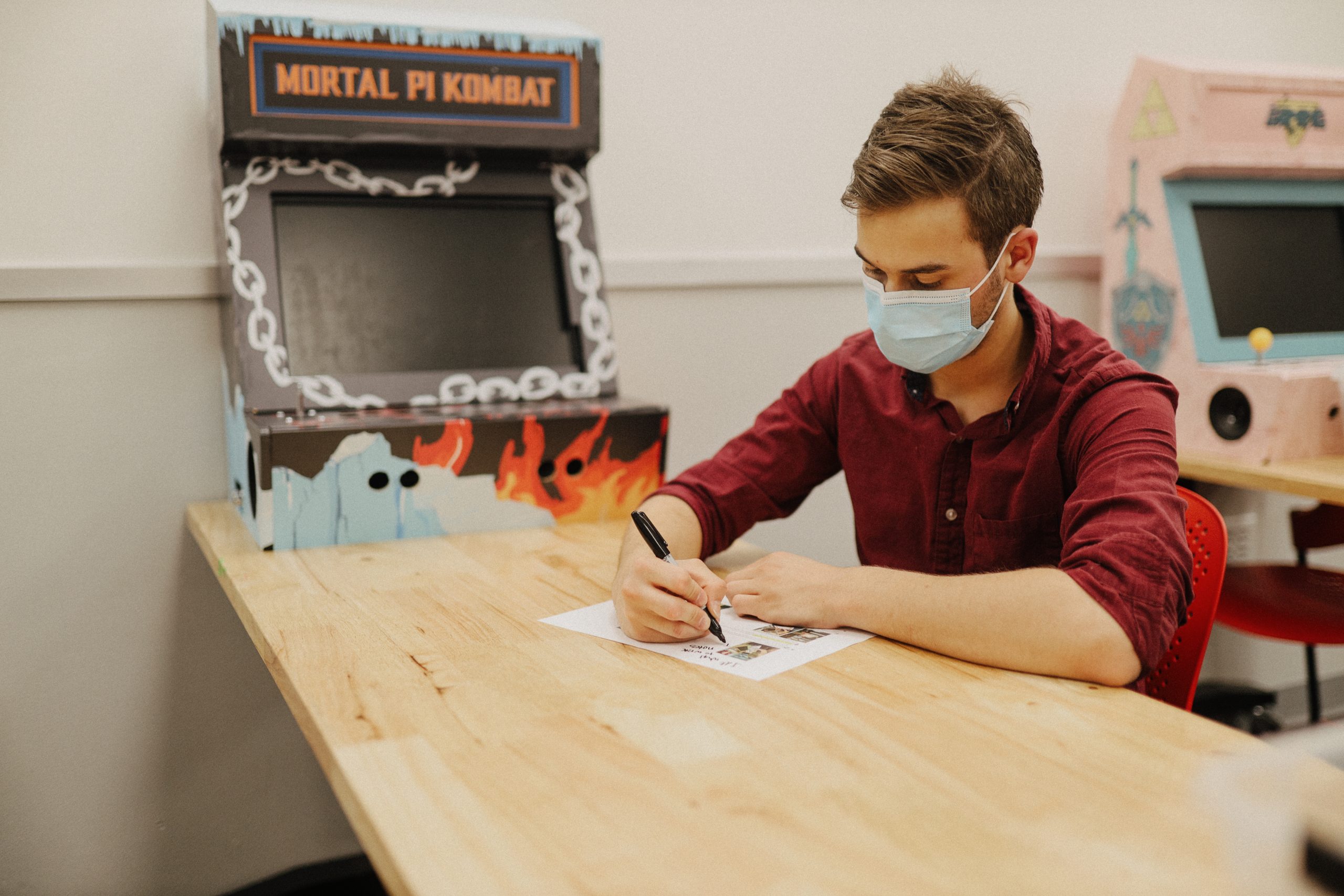 Keegan Dillon, a sophomore graphic design major from Cudahy, Wisconsin, prefers to solve and be graded by doing hands-on assignments other than answering traditional quiz questions. Brock Doman says there is a better way to test students’ knowledge than standardized testing. Photo by Misha Mosiichuk.

We’ve all been there, walking into a classroom, hearing chatter all about topics learned throughout the year. As you sit down next to your peers, the nerves become overwhelming, and you begin to question if you’ve studied hard enough. The exam is passed out, and the grade you earn on this exam will hold a weight of 25% of the final grade in the course.

The clock continues to tick and there are only 10 minutes left with 20 still unanswered questions. The realization of potentially failing the test and lowering your overall grade begins to settle in, and your dreams begin to fade. This makes the feeling of stress completely overwhelming, and the guessing game comes into play for the final portion of this exam. The feeling of defeat is agonizing, and you can only hope you can still pass the class.

From the time kids turn five and attend kindergarten to the day the final exam is given in their education, there is one overarching factor that determines how well a student was perceived to understand the information taught: grades. The focus on earning an “A” or getting a high GPA is something students hear every year to create a standard for what the instructor expects.

However, does a letter grade really define how well you know the information? Absolutely not. The focus in education should not be based on how well they could fill in 100 bubbles on a sheet of paper, but rather, how well the student learned this information based on a hands-on activity.

Edutopia states, “Though multiple choice tests are relatively easy to create, they can contain misleading answer choices—that are either ambiguous or vague—or offer the infamous all-, some-, or none-of-the-above choices, which tend to encourage guessing.”

There is still a need for testing, and it is extremely important to know if what is being taught is being retained and learned by the students. There are just better ways than multiple-choice, fill-in-the-blanks, or essay-question tests.

“Project-based assessments are an alternative to tests that allow students to engage with their learning in more concrete ways,” Elizabeth Trach from Schoology stated. “Instead of merely studying theory, a hands-on project asks students to apply what they’ve learned to an in-depth exploration of a topic.”

For example, in a general biology course, students may be required to take a multiple-choice exam based on the functions of the organelles in a cell. However, a different way this could be done would be for a student to create a PowerPoint on this information and share it with the class, create their own cell and make the organelles in an at-home project, or to let the students pick an organelle for themselves and write a paper on the function it has.

The information taught in a semester should be retained and not just “crammed” into a day or two of studying for an exam. Creating a hands-on exam or project creates an environment where the student must be learning about the topic continuously, so they are unable to memorize the information in one night only to have it leave their head the minute after they are finished with the exam.

If a student is responsible for creating their own unique version of the information learned in class, it would be quite obvious if they based it off of other students’ work beforehand.

The International Center for Academic Integrity shows between 2002 and 2015, 68% of all undergraduate students in college admit to cheating on exams. With hands-on projects, there is no opportunity in the classroom for the student to cheat like there is in a normal 50-minute exam given at Dixie State University, and that class period could be used for additional lecture, as opposed to taking the exam.

Creating an opportunity for students to show they have learned the information in a hands-on project rather than a multiple-choice test provides a more accurate view of whether the individual retained the information or not. Multiple choice, free response and fill-in-the-blank exams need to be replaced with project-based assessments.