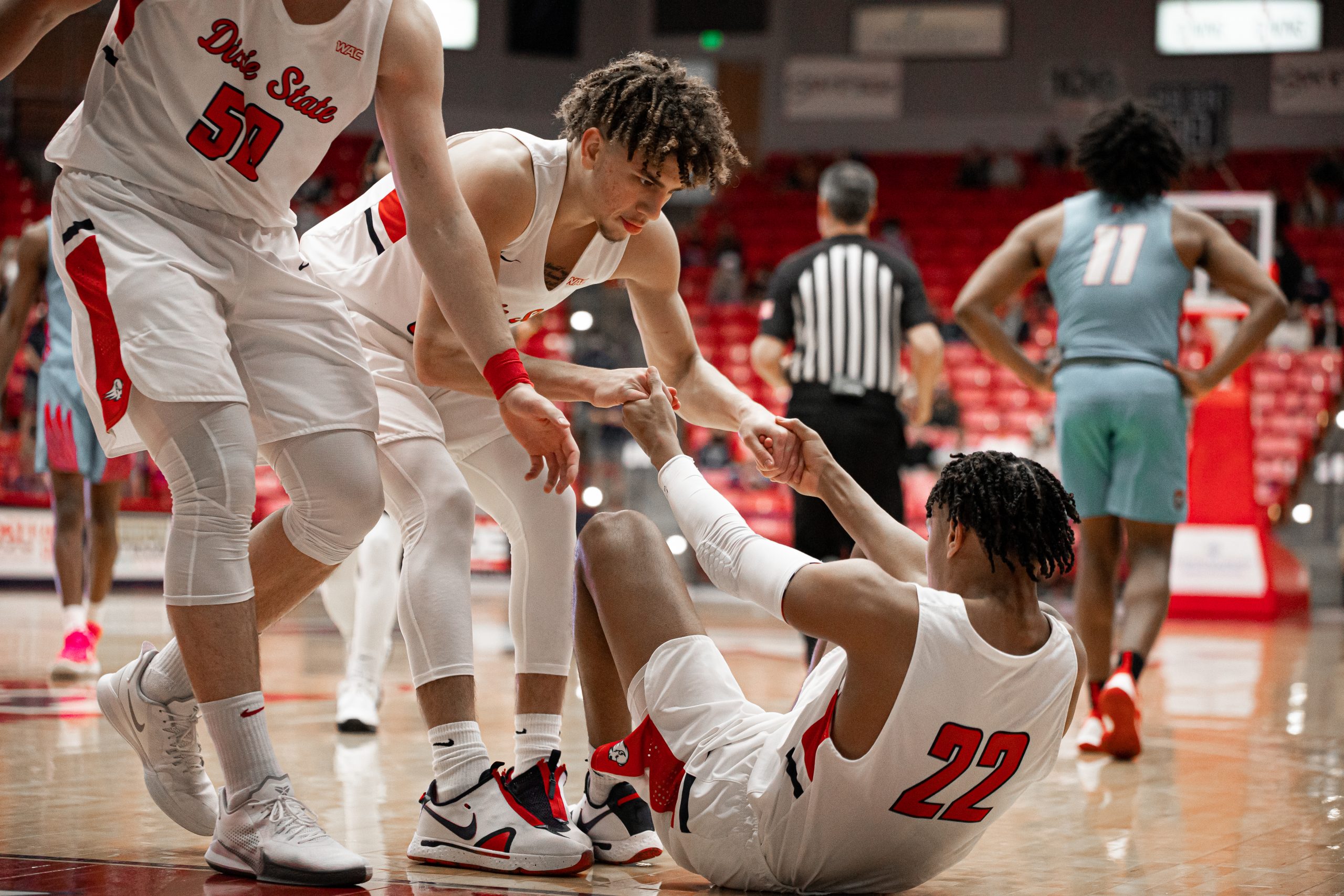 Isaiah Pope, a sophomore communication studies major from Yorba Linda, California, picks up Frank Staine, a sophomore finance major from Inglewood, California, in DSU men's basketball's 72-63 loss to the University of New Mexico on Jan. 13. Pope and Staine knew each other for years prior to becoming teammates at DSU. Photo courtesy of Dixie State University Athletics.

Dixie State University’s men’s basketball team has a bromance between two of the players.

The budding of the bromance

Staine said he knew of Pope growing up because they are both from California and played basketball against each other. They officially met four years ago while working together at a summer basketball camp for youth players. They became best friends and have stuck with each other ever since. Staine started playing basketball at DSU his freshman year while Pope played his freshman year at Humboldt State in California.

“Dixie State contacted me and they wanted me to come, [but] I couldn’t visit because of COVID,” Pope said. “I couldn’t check out any of the places recruiting me, so I called Frank and told him the situation and he gave Dixie a high recommendation.”

Pope said the reason he chose DSU was because of Staine and the recommendation he got from the recruiters. He trusted Staine’s opinion of DSU and he said he is so glad he came here.

Head coach Jon Judkins said: “They knew each other before we started recruiting Isaiah, which always helps. Coaches can say all the right things, but coming from players means a lot more.”

Their life together at DSU

Pope and Staine are not only on the basketball team together, but they also live and work together. Pope said you will not see one of them without the other.

“Off the court, I have somebody that I do literally everything with; there isn’t something I do that he doesn’t do,” Staine said.

The players said they even have a telepathic type of connection.

“For two weeks in a row after practice, we guessed what each other wanted to eat after practice; we said ‘one, two, three’ and said it at the same time,” Staine said.

Judkins said the players do just about everything together and they push each other to be better every day.

Time spent on the court

Pope and Staine both said they play well together because they can easily understand what move the other is going to make next. In practices, they cannot be on the same practice team because it won’t be fair since they know each other’s moves so well.

“Knowing each other’s tendencies really well is very important in basketball, and so I think we really bounce off of each other really well,” Pope said “We have a great connection on the court because of our connection off the court.”

Staine said his favorite moment on the court was when Pope tied the school’s three-pointer record because he knew how hard Pope had been working for that moment. Staine said it felt like he also tied the record.

“I think we play real well off of each other and [know] how to critique each other in a way that we understand,” Pope said. “We both push each other to make each other better.”