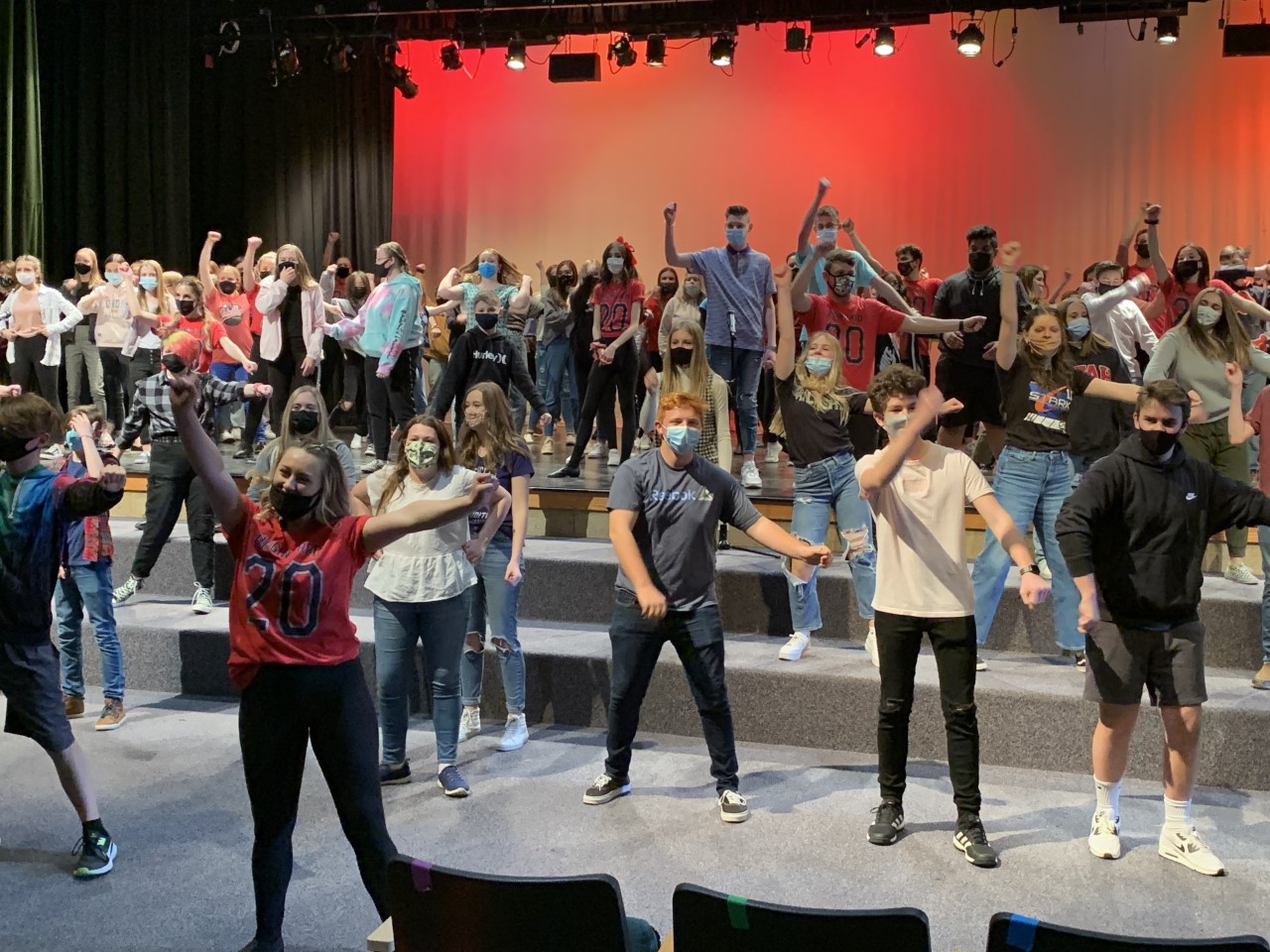 Raging Red perform at Elk Ridge Middle School March 11. The song and dance performance team thrives on its interaction with the audience during shows. Photo courtesy of Geoffrey Reynolds.

After the pandemic caused a rift in Raging Red’s performances, the song and dance team is looking forward to its big production of Mamma Mia! this summer.

Raging Red is Dixie State University’s performing group that travels around the world putting on productions at K-12 schools to recruit future Trailblazers.

The team was not able to have nearly as many performances in the past year due to the pandemic, but they did their best to adjust to the circumstances, Raging Red Director Geoffrey Reynolds said.

The team went from performing three to four times per week to once per week during the fall 2020 semester and twice per week for the majority of the spring 2021 semester. Performances picked up during the month of March to about two to three times per week, plus the team was able to travel to northern Utah for spring break and perform about 21 times at various schools.

“It’s been a pretty successful year despite the challenges,” Reynolds said.

In a normal year, a rehearsal consisted of students walking in and getting straight to practice, but during COVID times, the performers first needed to mask up, get their temperatures checked, and get regularly tested.

“We’ve followed suit on [the regulations], but looked at any opportunities for an active learning environment and performing experience,” Reynolds said.

While it would have been easy to use the COVID-19 virus as an excuse to halt all contact with one another, the group found ways to stay active and continue rehearsing together; however, the students weren’t always able to perform their perfected numbers.

Caydance Wilson, a freshman theater education major from Missoula, Montana, said at times it was difficult to maintain motivation to practice because she was always unsure if her and her teammates were going to perform the number at all.

“It was hard not performing because you feel so isolated,” Wilson said. “But we’ve gotten used to it and have been able to surpass the obstacles.”

Courtnee Ramos, a sophomore theater major from Las Vegas, saw this as a growing opportunity. She said she learned patience from not always being able to perform the work the team rehearsed.

Samantha Eagar, a sophomore vocal performance major from St. George, said not being able to perform as often made her appreciate her work and the opportunities to show her talents even more.

“Regardless, I got to know so many individuals this year and what their passions are,” Eager said.

The group went out of its way to continue practicing its craft and connect with its audience. The group’s first music video during the pandemic was shot and edited completely remotely. The students each recorded their dances from their own homes and made a mash-up of each of them.

Raging Red released two music videos before the pandemic and has added nine more since May 2020, which people can find under playlists on Dixie State University’s YouTube page.

Reynolds emphasizes the impact Raging Red can have on past, current and future students.

“Raging Red is often the first connection many people have with DSU,” Reynolds said. “We’re one of those first moments for a lot of people, especially because we go to other schools, we perform with young kids, we give that opportunity for them to get to know Dixie State [University].”

Students who attend the productions can gain a sense of joy, enlightenment, entertainment and culture, Reynolds said.

“The power of music really does change people,” Reynolds said. “Music is healing, it’s powerful, and watching someone performing and doing what they love just makes you happy.”

Ramos said watching the musical numbers can also be a distraction from everyday stressors and can bring someone joy for a moment.

The Mamma Mia! production is an opportunity for students to stay engaged with the university during the summer.

Eager said the best part about performing is connecting with the audience before, during and after each performance.

“Even if they don’t react the way you want them to, it’s still rewarding to share that with them,” Eager said.

Eagar said she is sad that it’s the group’s last big performance, but she is excited to share the experience with her teammates and audience.

Eager said: “Students should attend [the performances] because Raging Red works hard to really connect with the audience, to look in your eyes when we’re performing. … Audience members can really gain experience from seeing a group like Raging Red because it’s different than other groups who you only see when [they’re] on stage.”

Ramos said she’s looking forward to the upcoming performances to share what the team has worked so hard for all year and to share the joy and music they have to offer.

The student performers said they have gratitude for the opportunity to be part of Raging Red because of the growth in confidence, increase in their skills, and the long-lasting friendships they have gained.

The audience capacity of 1,700 people for the Mamma Mia! production will not be restricted considering masks will be required and the venue is outdoors, Reynolds said. A COVID-friendly section will also be available for those who want to ensure they are socially distanced.

The Mamma Mia! production is running May 20 – June 5  at the OC Tanner Amphitheater, and students can purchase tickets at the ShowTix4U website.

Raging Red’s final performance of the semester will be on April 30 at 8 p.m. at the OC Tanner Amphitheater. Students can purchase tickets at the Box Office website.