DSU loses 2 against University of Utah in midweek clash 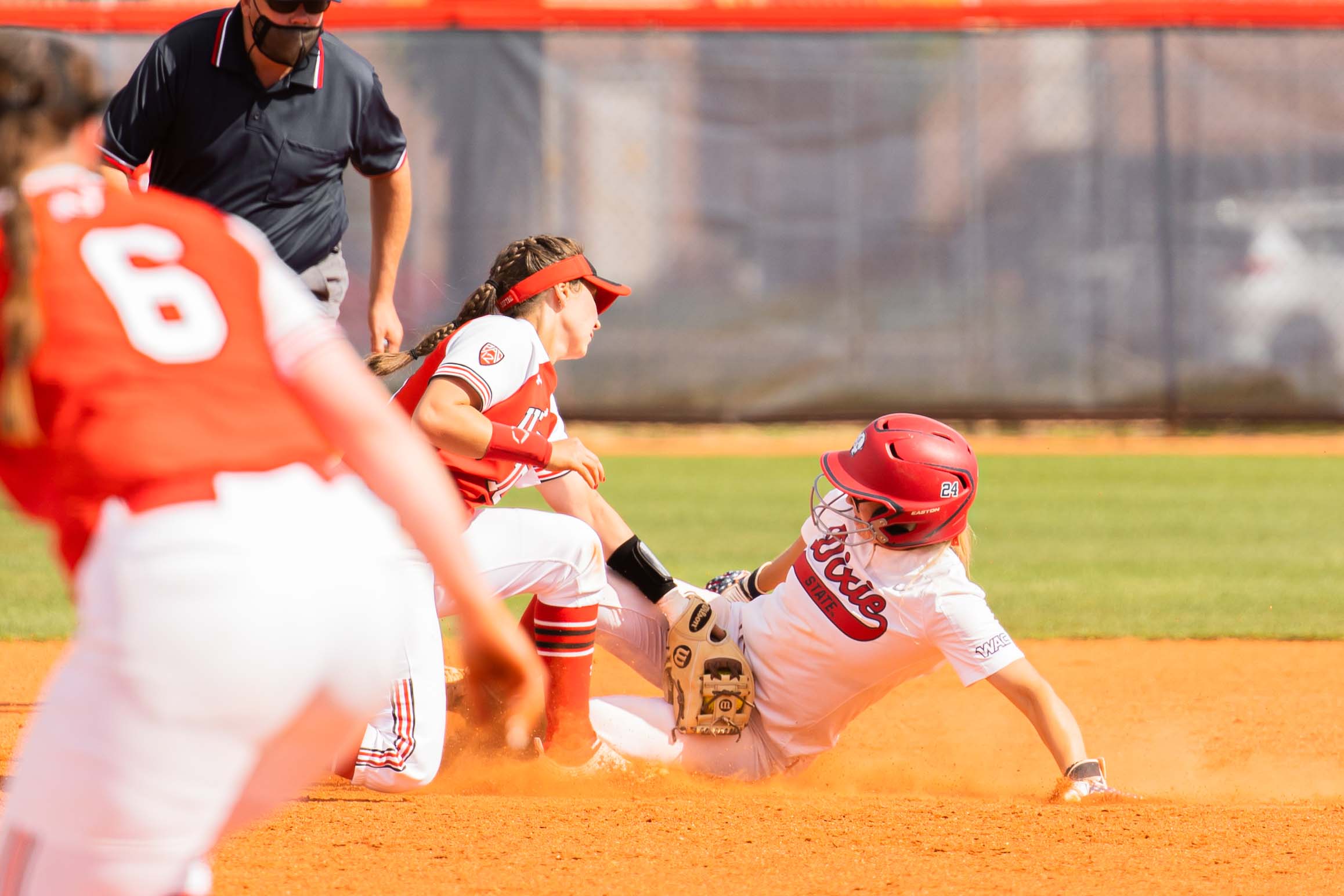 Megan Anders, a senior psychology major from Las Vegas, slides into a base in DSU softball’s 13-3 loss to the University of Utah. DSU lost both of the games in the two-game series with the Utes. Photo by Breanna Biorato.

This was the case with the University of Utah and Dixie State University softball teams. The two teams faced off in two midweek non-conference games hosted at Karl Brooks Field.

“I definitely think [playing Power Five conference teams] put a fire underneath [us] because we know they are good and are going to take us lightly,” said Meagan Anders, a senior psychology major from Las Vegas. “But leading up to [the game], we take everybody the same and play our hearts out no matter what.”

The two teams took the field to face each other for the first time ever as the series was under way April 6. In the first inning, the Utes put up two runs as DSU drew a blank.

This game was competitive throughout, with DSU trailing 5-4 entering the seventh inning. A single down the right field line brought in two runs for the Utes, and DSU couldn’t answer the bell to end the game, coming up just short at 7-4.

The Trailblazers hoped to avenge the closely contested loss in the second game of the series. After three innings, the Utes were ahead 6-0 and DSU needed to get some points on the board.

“In the first inning, we got our first two runners on [base], we just weren’t able to execute to move them,” head coach Randy Simkins said. “When you get to first and second with nobody out, you’ve just got to be able to move them, and we just didn’t execute there early.”

Kate Dolinski, a junior psychology major from Fort Langley, British Columbia, entered the game and took the mound hoping to stop the Utes’ run at the start of the fourth inning.

“It didn’t bring more stress [being down 6-0] as a pitcher,” Dolinski said. “When we have more runs, it’s more insurance for us, but when we don’t it fires me up and I have to compete for [the] team.”

Dolinksi allowed just one hit in the fourth inning.

The Trailblazers earned two runs in the bottom of the fourth inning, as four hits brought in two runs to bring the game to 6-2. Another run was scored in the fifth inning as Hannah Hughbanks, a sophomore exercise science major from Chino Hills, California, crossed the plate on a sacrifice fly by Mikaela Thomson, a senior business major from Herriman, bringing the game to just three runs at 6-3.

Just as DSU put together a short run in the fifth inning to put themselves within reach of striking distance, the Utes responded with a five running sixth inning to increase the lead to eight. The game ended in the bottom of the sixth since DSU couldn’t string together another offensive run.

“We need to make plays,” Anders said, “We can compete with anybody if we do that.”

The Trailblazers remain tied for No. 3 in the Western Athletic Conference, with a 3-3 conference record. DSU will head to Phoenix to take on Grand Canyon University in a three-game series with a double header on April 9, and then finish the series on April 10.