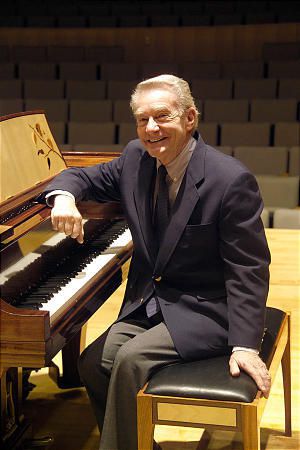 Emeritus professor Ronald Garner passed away March 22 due to natural causes. His contributions to the DSU music department are still remembered and appreciated today. Photo courtesy of Deseret News.

Emeritus professor Ronald Garner passed away March 22 of natural causes at 90 years old. Though he has passed on, his legacy still lives at Dixie State University.

“He was ‘Mr. Positivity,'” said John Bowler, director of alumni relations. “He was that guy who would tell you ‘you can do anything.'”

Garner worked at DSU for 54 years in the music department, and he still holds the title of “one of the longest-serving state employees in Utah history,” according to an email from President Richard ‘Biff’ Williams.

Ginger Nelson, director of arts programming, said: “Although I never met Dr. Garner, his dedication to the Celebrity Concert Series was the beginning of a tradition that has lasted over 60 years. Our series family will surely feel his loss, and we hope to carry on the spirit of bringing performing arts to our community for 60 more years to come.”

Along with founding several music programs, he directed over 1,000 concerts and performances throughout his career at DSU, Webb said. He was extremely knowledgeable about all music and specifically loved to teach students about music theory and jazz.

“He was instrumental in building [DSU] into what we know it as today,” Webb said. “You know, Ron was doing ‘active learning, active life’ before anybody thought of that.”

Garner was a major advocate and helping hand throughout all the eras of DSU, Webb said. He was an active voice when the college was just beginning and building the campus students use today, and he helped transform it from a two-year college into a four-year university, all while teaching and mentoring students in the music department.

“He used to talk about music and musicians with such enthusiasm,” Webb said. “He was a wonderful teacher. When he was teaching and conversing with students, he was always interested in what they had to say; there was no condescending bone in his body.”

Bowler said during homecoming week at DSU, Garner would always have a group of students come back to campus just to visit, hang out and chat with him.

“I mean, it’s an incredible thing when you think about it,” Bowler said. “Students that are now my age or older come back just to see him and be associated with him — that is an incredible legacy. That shows the type of person he was.”

Webb said Garner gave him instant opportunities to explore his career in music before even attending DSU. Garner invited Webb to play in the Southwest Symphony Orchestra as a teenager and constantly took him on trips to Salt Lake City to listen to visiting orchestras.

Little did Webb know that one day he would have an office right down the hall from Garner. The two became close colleagues and friends as music professors at DSU.

“What I will cherish is the countless hours of service, kindness and positivity [Garner] shared with us as a campus, as a community, as a world,” Bowler said.

Currently, all funeral plans only involve Garner’s close family. There will be no public viewing due to COVID-19, according to Garner’s obituary.

Webb said he has spoken to the dean of the College of Fine Arts about naming the concert hall after Garner to honor him on campus. There are more plans to come involving remembering Garner on campus, but the specifics are not known at this time.