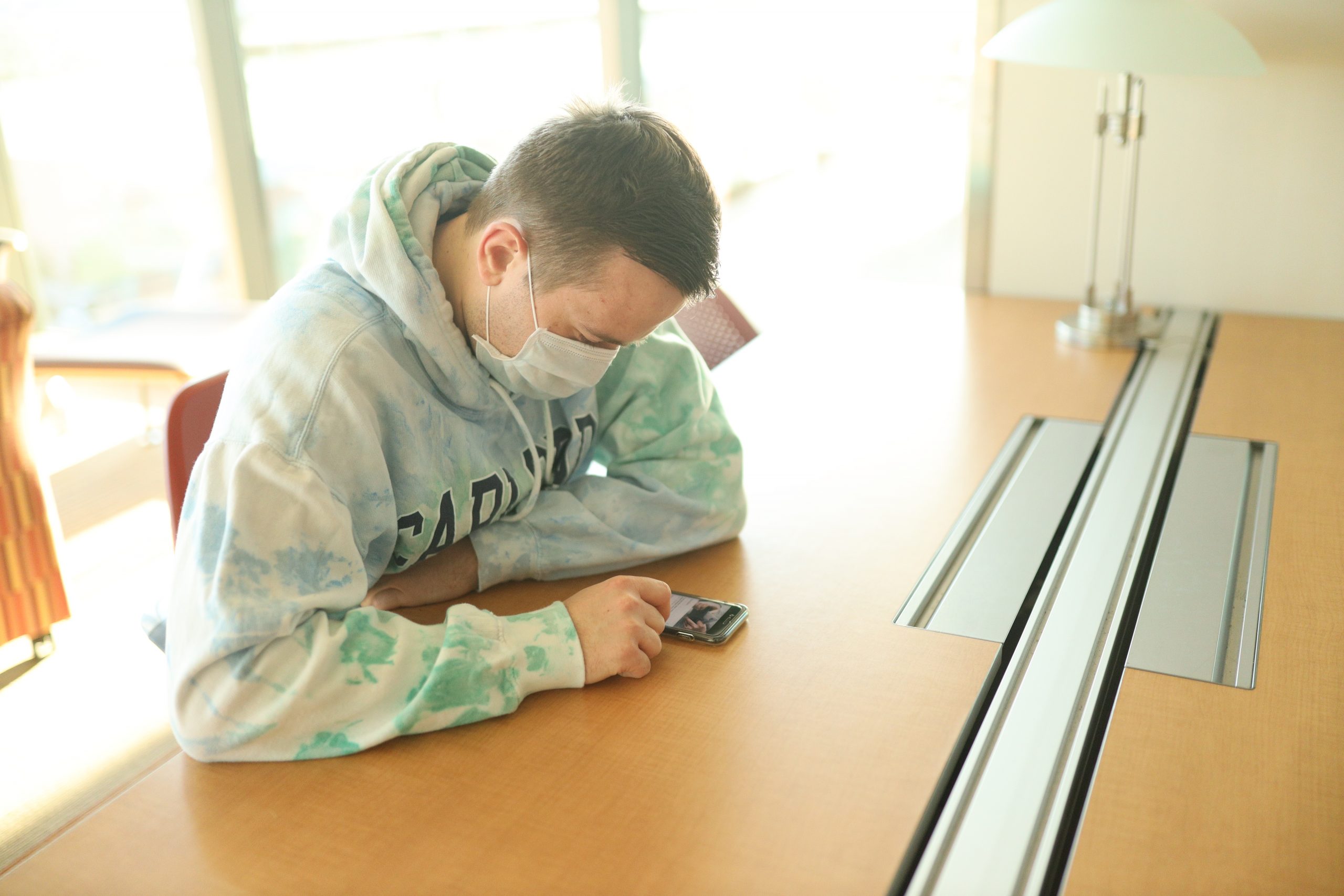 Michael Zalupko, a sophomore Digital Design major from Lviv, Ukraine, uses his phone during his classes. Professors find it distracting and disrespectful. Photo by Misha Mosiichuk.

Have you ever attended a lecture and couldn’t shake the feeling that the professor just doesn’t like you?

Typically, there’s things professors do that students dislike and most students aren’t afraid to make that known to others, but let’s flip the script. There are a few student behaviors that tend to annoy professors at Dixie State University.

To be fair, when each professor was asked, ‘What are some behaviors students do that drive you crazy?’ just about every response was prefaced by saying they rarely have issues with students and enjoy working with those in their classes.

“Having the opportunity to watch my students grow and progress these past few years has truly been an incredible experience and one that I’ll never forget,” said Kisa Smith, part-time humanities and social sciences instructor.

However, there were some professors who gave a few helpful hints to Trailblazers on how they can avoid driving them crazy:

Earning a good grade on a test, working hard for an “A” in the course, or getting a 4.0 for the semester would all be great academic goals to achieve. The question is, did you deserve the “A” or did you bully the professor into giving you that grade?

Smith said she encounters this type of behavior at the end of just about every semester.

“I’ve had a few students come at me during finals week, trying to bully me into giving them a better grade than they deserved,” Smith said.

After Smith gave a particular student several different chances to improve their score on a paper that was due, the student continued to make minimal changes to their paper, still hoping their grade would raise. She said the student then attempted bullying her to force her to give him the grade he wanted.

“If I allow students to bully me into giving them a grade they didn’t deserve, it will cheapen the integrity and quality of the course and it really wouldn’t be fair to my students who put in the work to get a good grade,” Smith said.

Smith isn’t the only professor this happens to and wants to remind students to be respectful to their professors regardless of the letter grade they receive in the course.

Smith said: “Bullying professors is one of those topics that we don’t talk about enough, but it is a huge issue on campus. Many professors tolerate this abuse silently and on their own, [but] students need to know that this behavior is not OK.”

Clint Buhler, associate professor of humanities, said trying to manipulate the details or due date of an assignment is one thing he is frustrated with.

“I guess for me the number one pet peeve is when a student emails me with demands that should be requests,” Buhler said.

Here are some examples of actual emails Buhler received:

“Nobody likes to be commanded to do something, especially when it’s something they’re under no obligation to do,” Buhler said. “It’s not that hard to ask something in a respectful way.”

Buhler said students need to be aware of the deadlines they have and, if needed, turn in an assignment early.

We all know it’s hard to stay focused and engaged in the class if it’s through Zoom, but it is just as important to participate online as it is if you are in class, Smith said.

Smith said she once had a student say that her discussion forum questions were ‘lame and poorly written.’

“It’s OK to not agree with everything your professor does, but college is all about playing the game and completing assignments the way your instructor asks you to so you can get a good grade,” Smith said.

In just about every class here at DSU, the first day typically involves your professor reviewing the syllabus.

Instead of paying attention and understanding how the course is structured, students often use this day to play on their phones, doze off or find people to potentially date in that class, but paying attention to the syllabus may relieve your professor of a headache and save a few emails.

He said, “Ninety-five out of 100 emails could be answered with, ‘Was [the answer] in the syllabus?'”

The last few weeks of the semester, you may do your absolute best to improve your grade and complete all of the assignments you have missed. Mark Lavoie, assistant professor of media studies, said this is one of the biggest pet peeves he faces as a professor.

“[My biggest pet peeve is] waiting until the last few weeks of a class and then students coming to me with the reasons they are doing poorly and begging or demanding I let them do make-up work or extra credit,” Lavoie said. “Miss me with that mess.”