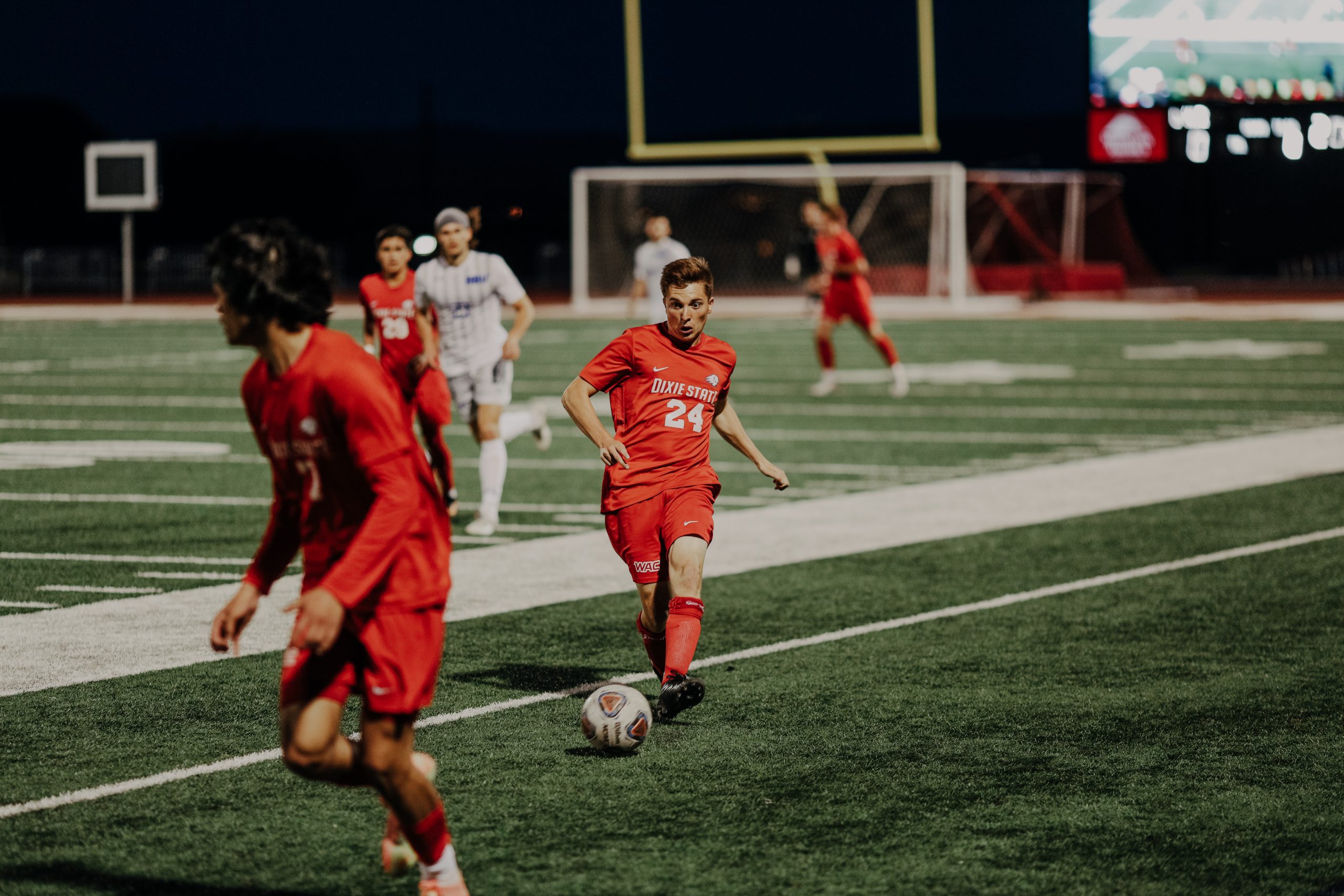 Larsen Rogers, a freshman psychology major from Albuquerque, New Mexico, passes the ball in DSU men’s soccer 2-1 win March 20. The Trailblazers took it to overtime and a golden goal to find its win. Photo by Misha Mosiichuk.

Coming into this men’s soccer matchup March 20 between Dixie State University and Houston Baptist University, the winner was determined by who was more aggressive on offense.

Both teams came into this game struggling offensively with each program only having three goals on the season. Whoever put more pressure on the other team’s defense was going to win the game.

“Both teams were hurting for goals,” head coach Jonny Broadhead said. “We’ve been shutout our last two games and not too many chances created all season, so we spent quite a bit of time this week [working on our shooting.] [The team] found a new piece of confidence with their shooting which I thought was there tonight.”

The Trailblazers came out swinging in the first half with five shots including a penalty kick miss from forward John Joseph, a sophomore design major from Richmond, British Columbia, that could’ve put DSU up by a goal. The Huskies struck first with the first goal of the game in the 17th minute.

Midfielder Logan Bues, a sophomore marketing major from Salt Lake City, said the players weren’t fazed by being down a goal and kept their heads held up high and raised the energy up.

Moments after HBU got its first goal, the Trailblazers were called for a foul and the Huskies had an opportunity to go up by two goals with a penalty kick. Goalkeeper Jakob Moore, a junior recreation and sports management major from Wellington, New Zealand, blocked the penalty kick, saving his team from being down by two goals.

Broadhead said Moore’s save was clutch and it was nothing new for him because Moore has been in situations where he was “the man stepping up in a game and making a big play.”

DSU went back on the attack with seven shots, and midfielder Jimi Villasenor, a redshirt freshman marketing major from Las Vegas, had three opportunities to score but all were turned away.

“I tried to get some chances with the team and coach [Broadhead] told me before the game to try to get some shots on goal since we didn’t have that many and that’s what I did,” Villasenor said. “Unfortunately, [my shots on goal] didn’t go in, but hopefully I get one next time.”

In the 43rd minute of the game, the Trailblazers got on the board before halftime with a goal from midfielder Niko Shumov, a redshirt junior marketing major from Keaau, Hawaii.

Coming out of halftime, DSU continued its offensive aggression, but it was a stalemate throughout the second half.

Broadhead said it was hard to keep up the energy from the first half because Joseph was in foul trouble, which led to sitting him out most of the second half, causing the energy to die down.

Before the second half ended, Joseph got another foul in the 89th minute to get himself a red card which forced him out of the game. He lost his cool after the referee gave him a red card and left the field steaming.

Broadhead said emotions are natural and Joseph is a very emotional person. Broadhead continued saying he tries to teach him things like how he’s got to stay in check, but that he also loves the emotion and Joseph has to find that balance with his emotions.

“[Joseph] responds well to [his emotions and] the team loves him, loves what he does, so they were frustrated that he did get in those challenges that got the red card, but the team chose we’ll deal with that later and we’ll let [Joseph] know that we love him and we’re going to take care of this, which means a lot to [Joseph],” Broadhead said.

However, the Trailblazers had to stay composed as they were heading into overtime against HBU. It didn’t take long for DSU to put the game away as Bues scored the game winning goal in the 94th minute, defeating the Huskies 2-1.

The Trailblazers captured their second win of the season; despite what the final score says, DSU outshot HBU 21-8 with 10 of those shots being on goal.

Broadhead said he saw the confidence in his players when they were continuously telling him during the game, “Coach, we’re not losing this game.”

“After all that shooting this week, there seems to be that confidence in getting another goal, and I’m not surprised because of our training this week,” Broadhead said.

The Trailblazers will have a quick turnaround matchup against in-state foe Utah Valley University. This game will take place on March 22 at the Wolverines’ home field in Orem.