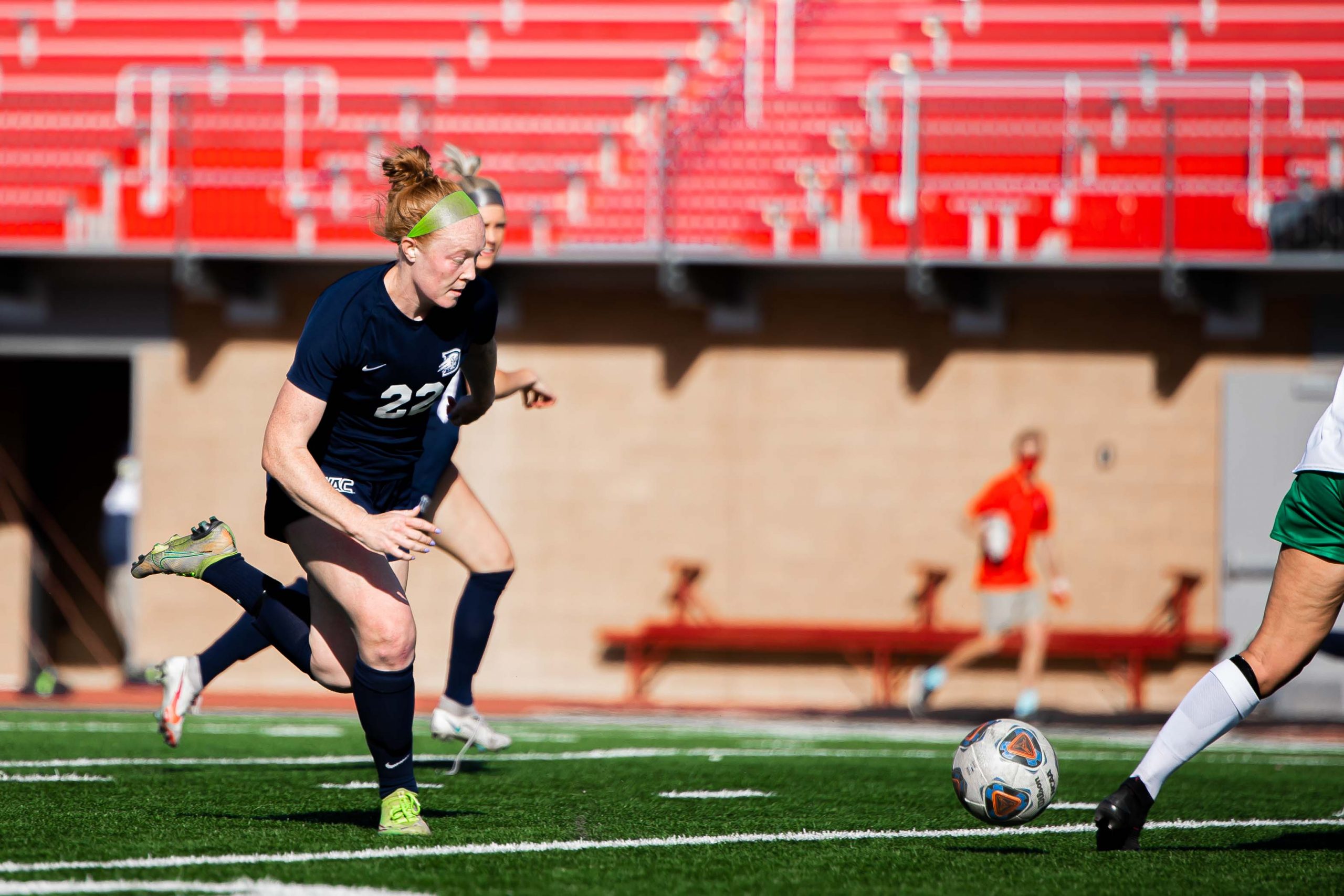 Whitley Griffiths, a redshirt junior social science composite major, dribbles the ball in DSU's 3-2 loss to Utah Valley University. Griffiths scored in the match for her eighth goal of the season. Photo by Breanna Biorato.

DSU had two 4-0 wins last week against Chicago State University and was on a high coming into this game, but the talent the Wolverines had was too much for the Trailblazers to overcome.

It would take just 16 minutes for UVU to net its first goal. Scored by London Miller, the goal came off a chaotic corner kick that couldn’t be cleared out of the box. Giving up set-piece goals was something that DSU worked on this week, but the Trailblazers were unable to stop the Wolverines from capitalizing.

“We couldn’t sort out how to stay organized on [set pieces], and we got exposed because of it,” head coach Molly Rouse said. “It’s just a matter of continuing to work on what our foundational organization on set pieces is, and [figuring out] how do we solidify those for us.”

The second goal for UVU also came from a misconstrued set-piece that found the Trailblazers down 2-0 in the 41st minute. UVU’s Sydney Bushman put the second one away after a few passes around the 18-yard box. The game headed to halftime with the Wolverines leading 2-0.

Coming out of the half, the Trailblazers looked like a different team. The team came out aggressive, made a handful of halftime substitutions, and played what Rouse cited as their original game plan.

“That second half, we played the second half the way we should’ve played the game the whole time,” said Whitley Griffiths, a redshirt junior social science composite major from Phoenix. “You can’t really be mad about that; it’s just about being focused for the whole game, the whole 90 minutes.”

Rouse echoed the same thoughts as Griffiths and said her team has halves and sections of games when they look great and moments when they have mental lapses.

“We can’t give up goals when we are prepared for the ways they are going to score them,” Rouse said. “[In the second half], they committed to executing our game plan better.”

After 55 minutes, DSU found themselves down 3-0 thanks to another goal from UVU’s London Miller, who earned her brace on the night.

The third goal woke something up in the Trailblazers and started the team’s comeback. In the 63rd minute, just eight minutes after the third Wolverine goal, Griffiths let a screamer from near the top of the 18-yard box into the upper 90 of the goal to notch her eighth goal of the season.

“We totally can always count on Whit to create something for us in the attacking third,” Rouse said. “With her space, with her movement, she’s someone people have to constantly worry about.”

Griffiths was a little bit more humble about her goal in the matchup with UVU, saying that although the goal felt good, she doesn’t like to think too hard about being DSU women’s soccer’s leading scorer because, at the end of the day, it is a team game.

“I’m just trying to get a job done for my team,” Griffiths said.

DSU pulled one more back thanks to defender Jill Bennett, a senior fine arts major from Salt Lake City. Bennett got the unassisted goal in the 80th minute, and for the final 10 minutes of the match, the Trailblazers fought, but they fell just short of the comeback.

This match with UVU was the Trailblazers’ first weekend of conference games, with just a single game that provided Rouse and her coaching staff an opportunity to give players more minutes than they usually would, worrying less about resting legs and more about using momentum to push the team.

Rouse said she had tried to rotate evenly, but today, “if you’re feeling good, we’re going to keep you in as long as possible, as long as you’re being productive.”

Despite the loss, Rouse was happy with how her team responded in the second half. She said she thought her second-half team caught a good groove, which she was excited about.

The team will face New Mexico State University on March 24 and 27 in Las Cruces, New Mexico. Rouse and Griffiths said they are looking to forget this game and show the Western Athletic Conference that they are still a team to be worried about.

“[We’re excited] to keep growing and keep showing that we can be competitive in this conference and this level,” Rouse said. “This group stayed committed to the process, and the results will start to come once they start to put together a full 90 minutes.”