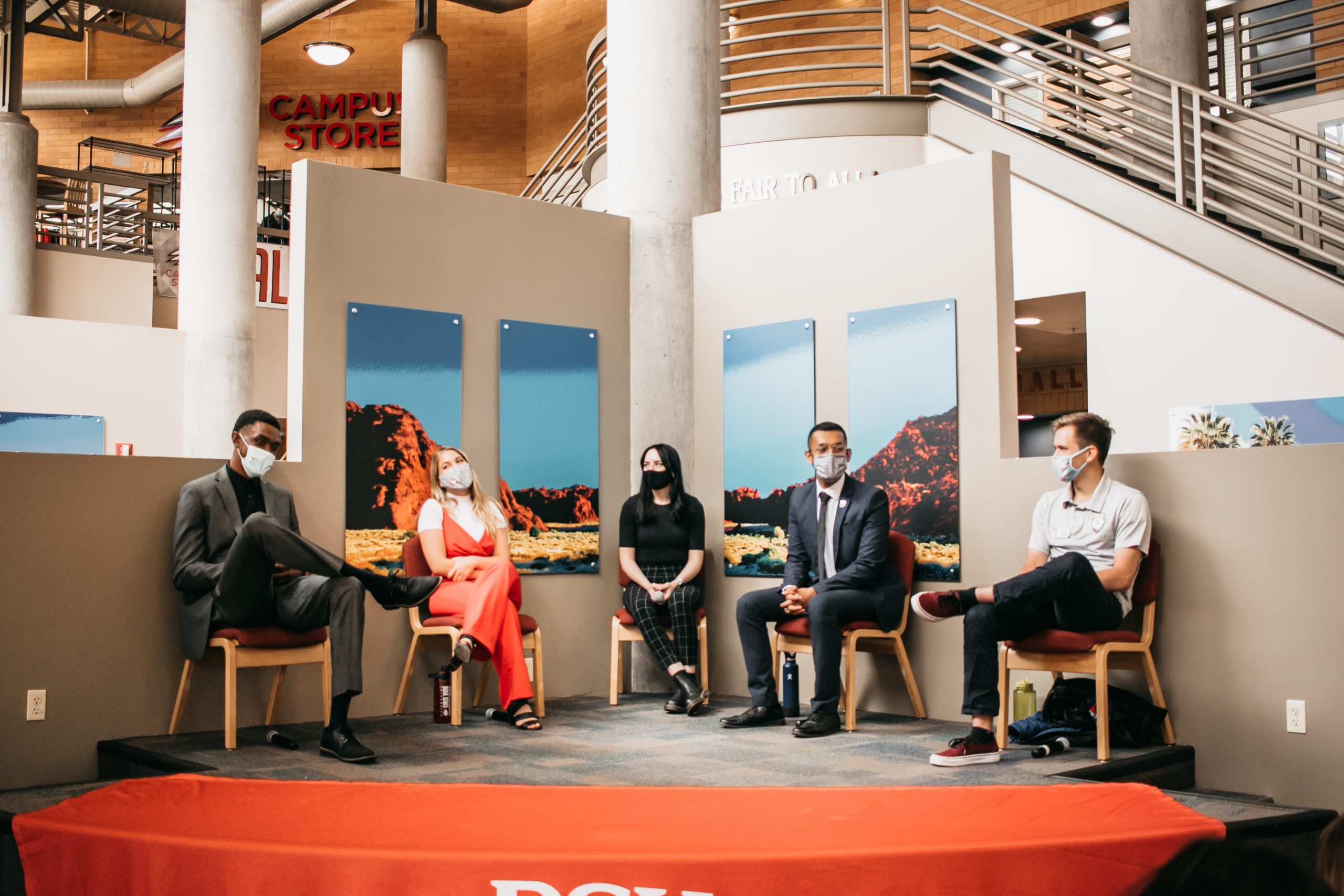 Candidates running for student body president, vice president of clubs and organizations, and vice president of academics gathered at the Kenneth N. Gardner Student Center to answer questions given by the Institute of Politics and the Dixie Sun News. Photo by Bailey Chamberlain.

Dixie State University’s 2021 student body elections are in full swing and the finalists debated hot topics in the hope of wooing voters.

Contenders for student body president and vice president of clubs and organizations discussed their goals for DSU March 16 in the Kenneth N. Gardner Student Center living room to an audience of parents and DSUSA members.

The masked up candidates focused on topics such as education, diversity and transparency.

Mills, who is seeking re-election for the 2021-2022 school year, said she has had obstacles thrown at her for the duration of her presidency and had to get creative when advocating for the student body.

“With COVID, I was not able to do what I wanted with my presidency,” Mills said.

“The job of the student body president is to be your voice,” Mills said. “I want to be in front of more students and let them know that’s my job.”

Osborne touched on some of Mills’ themes of unity. He said he believes DSU is a growing school full of opportunities for everyone. He also highlighted how important it is to connect with the student body.

“I want to push important conversations and put them on a bigger stage,” he said.

Osborne said he believes leadership is all about bringing awareness to certain issues and bringing light to important topics. He said key resources on campus need to be widely promoted in the classroom.

Osborne said: “We need to get in front of the students on different types of levels. From classrooms to clubs, it will be the best way to promote our resources here on campus. “

While Osborne is adamant about promoting resources in the classroom, Mills is a big believer in word of mouth.

The vice president of clubs and organizations debate presented the ideas of Ryan Hafen, a sophomore accounting major from Southfield, Michigan, and Cesar Ruiz, a sophomore English major from Littlefield, Arizona.

Hafen is the current recreational and entertainment club representative for DSUSA and said he knows what it means to be involved.

“Being part of a club can help you get to know people and connect with others,” Hafen said, “As the vice president, I would help students feel included.”

Ruiz said he believes that college is all about building meaningful relationships, not just going to lectures.

“I want to make sure that students have access to different hobbies and groups of people who have the same interests as them,” Ruiz said.

Both candidates stressed how important being part of a club can be to a student’s college experience.

Hafen said the study body needs to be instilled with confidence to be part of club life, while Ruiz said he is a big believer in club awareness and approachability.

Katie Sanders, a junior biology major from St. George who is running unopposed for vice president of academics, sat quietly on the stage for the majority of the debate. She was asked to inform the audience of what her role would be as the vice president.

If Sanders is elected, her duty would be to oversee the college senators and be the voice for each academic college.

The general election polls are now open and close on March 18 at 1 p.m. The winners will be announced March 18 after 1:30 p.m.