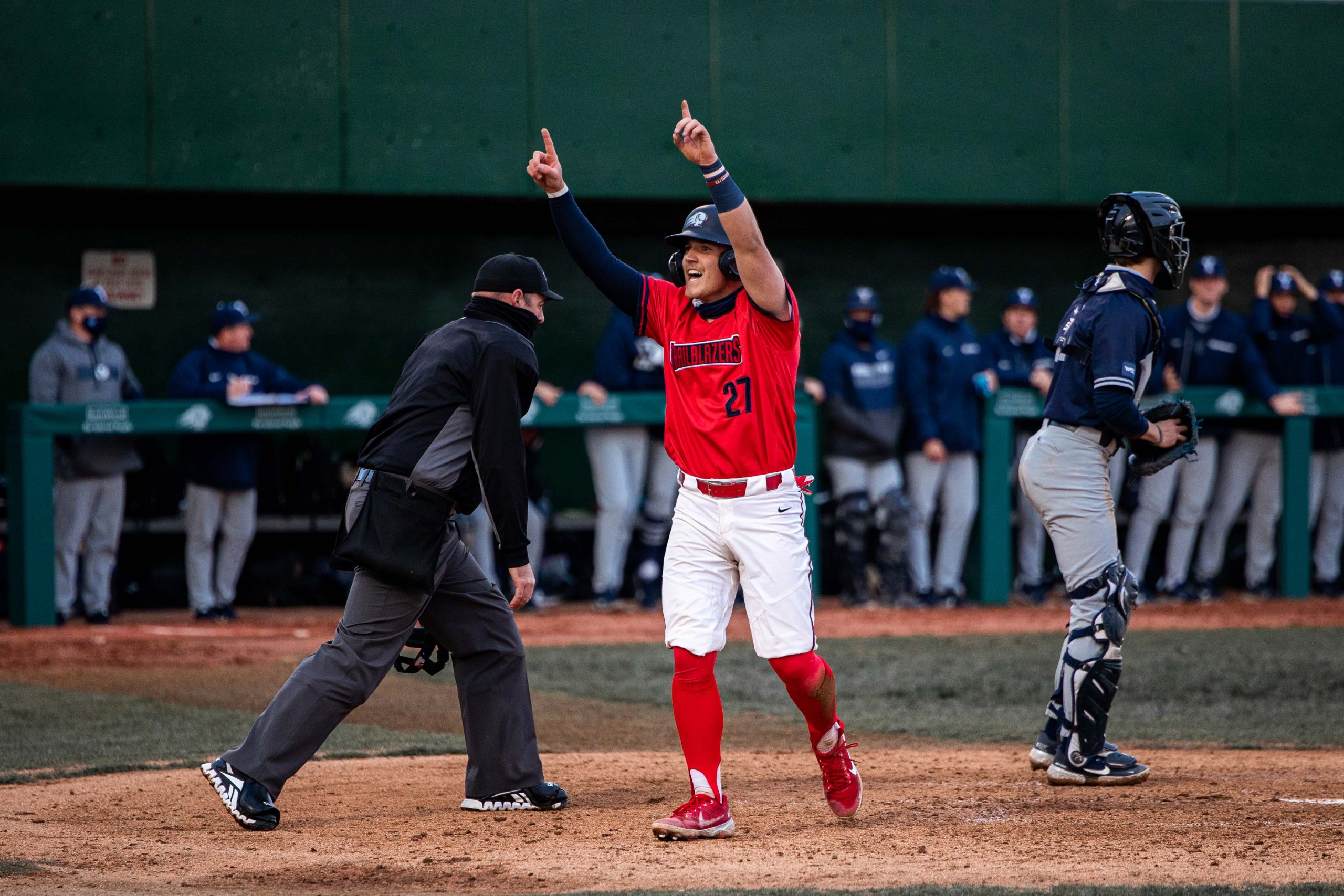 Kaden Hollow, a freshman general studies major from Boise, Idaho, celebrates his run in Dixie State University’s game against Brigham Young University March 16. Hollows' run was the first of five in the Trailblazers 5-4 win over the Cougars. Photo by Breanna Biorato.

After the Dixie State University baseball team started the season winless in its first 10 games, the team earned its first victory March 14 against New Mexico State. Just two days later, DSU took to its home field looking to turn that victory into a winning streak.

This game would be no walk in the park for DSU since it took on in-state Division I rival Brigham Young University. Last season, BYU posted a 7-9 record before having the season shut down because of COVID-19. This was the first match-up between the two teams, as they are set to battle again later this season.

“We take in every game the same way; we want to win every game we play, so we’ll stick to our approach regardless of who we’re playing,” said Lane Pritchard, a senior psychology major from Red Bluff, California.

The players treated this game just like the others, and head coach Chris Pfatenhauer knew familiar faces in the opposition’s dugout.

“My predecessor coach Littlewood and his staff came from here, so [there were] a lot of emotions to get to see those guys and compete against them,” Pfatenhauer said. “That set the tone for [the game].”

After the Cougars got on the board by scoring a solo run in the second inning, DSU didn’t take long to reply with an explosive fourth inning, tallying up four runs.

“We were just trying to get ahead and not fall down by two or three; we were fortunate enough to get some good pitches to hit and did some damage,” Pritchard said “We were trying to stay locked in.”

The game remained 4-1 until BYU hit a 3-run home run to tie up the game in the seventh inning. DSU did the job defensively to hold the Cougars scoreless for the eighth and ninth inning, and the Trailblazers had the chance to bring in the game-winning run in the bottom of the ninth inning. The bases were loaded with one out as Pritchard stepped up to the plate and hit a line drive RBI single to seal the victory for DSU.

“[My emotions] were high at first,” Pritchard said. “Coach told me to slow things down and I was just trying to take things one pitch at a time.”

The Trailblazers will look to ride the momentum of this two-game win streak this weekend as they are back at Bruce Hurst Field for a a four-game skid with University of Texas Rio Grande Valley. Game times and dates can be found here.