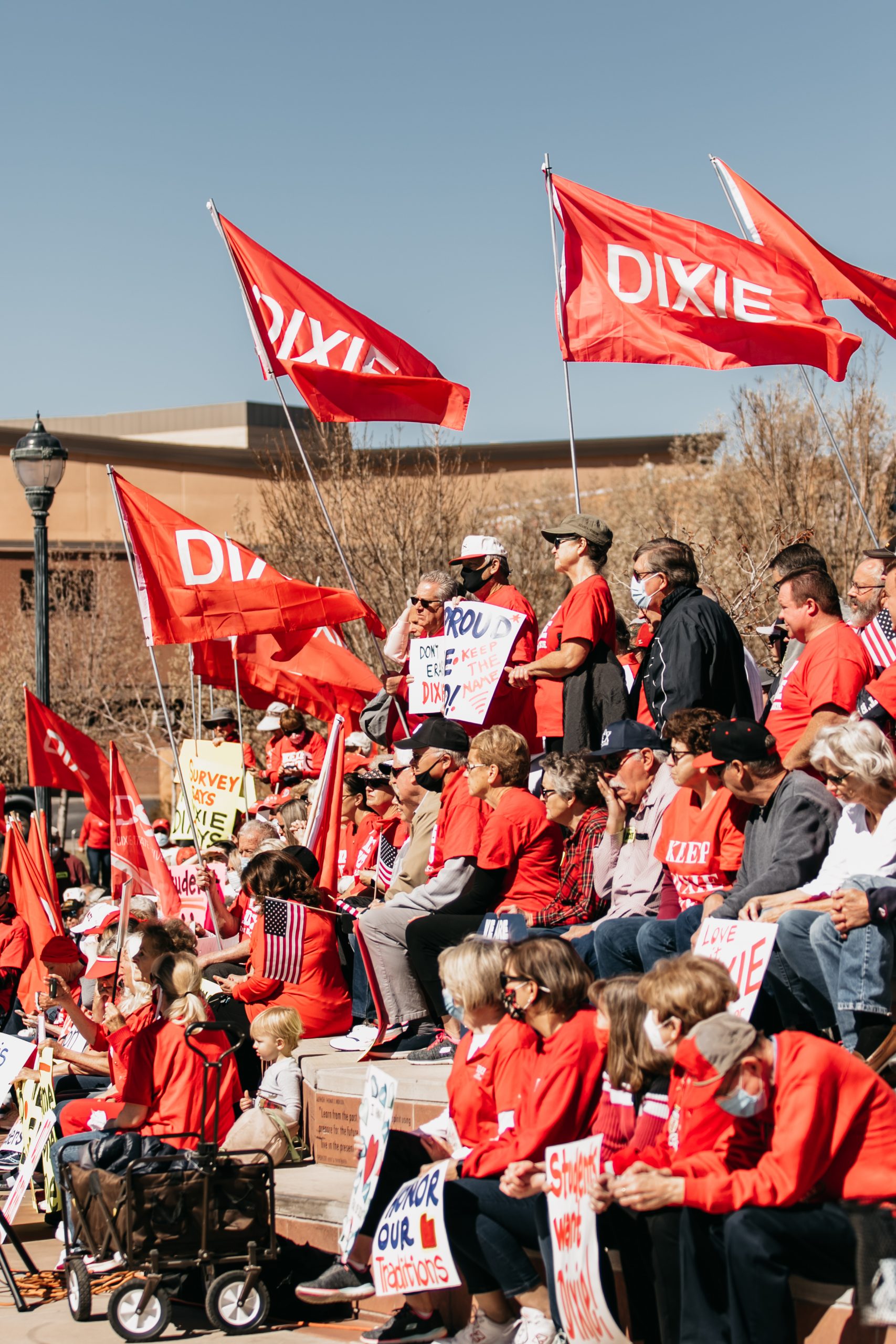 Protestors of all ages gathered to share their thoughts on the Dixie name change on March 1st, 2021. People against the name change gathered under the clock tower for a short program while protestors for the name change congregated just north of those against. Photo by Bailey Chamberlain.

The Defending Southwestern Utah Heritage Coalition initiated a protest at the Dixie State University clocktower to oppose the name change bill that the Senate Education Committee expects to hear at 4 p.m. today. A counter-protest in favor of the name change was also organized at the opposite end of the Encampment Mall.

Ralph Atkins, family member of the Atkins family that sponsors certain scholarships for DSU, said he feels that the community has been left out of the Dixie name change discussion.

“The problem is, we were told that we’re going to change the name, and then we would figure out the new name in [the fall],” Atkins said. “It is unfortunate that this community and this school are being divided over a name that we don’t even know. We know the name Dixie, but we don’t know what the new name is going to be.”

DSUHC members said they feel that the student-led Capitol Hill protest was biased because the DSU administration only let students in favor of the name change to go and protest in Salt Lake City.

Community member George Staheli said he believes that the students who went to protest did “a good job,” but “the way they went about rounding up students were [exclusively] for the name change, but didn’t give students against the name change a chance to go.”

The group of counter-protesters in favor of the name change held signs showing support for changing the Dixie name.

Sally Lacourse, community member and wife of Provost Michael Lacourse, said: “We are no longer a local college, we are becoming nationally recognized, we are in division one, [and] we can’t keep the name Dixie. The time for change is now.”

Mary Anne Hamilton, another counter-protester and community member, said she believes that “it is not about disrespecting people’s past, but embracing the different culture for our schools.”

Hamilton also said she believes that if the name affects any students in a negative way at all, it should be removed.

“I think we have to look to the future,” former faculty member Della Lowe said. “Preserving the past is one thing, but we have progressed a lot in the last seven years. I am really amazed at what this university has done, [but] Dixie means something entirely different in parts of this country.”

Leann Lechtenburg, supporter of the Dixie name and Rebelette alumni, said she believes that everything is being claimed as racist whether it is or not, like the Dixie name.

“[The name] is all over the south,” Lechtenburg said. “They have all sorts of things named Dixie.”

Dixie name supporters say that this protest has the same agenda as the protest that happened Jan. 11, which is to keep the Dixie name.