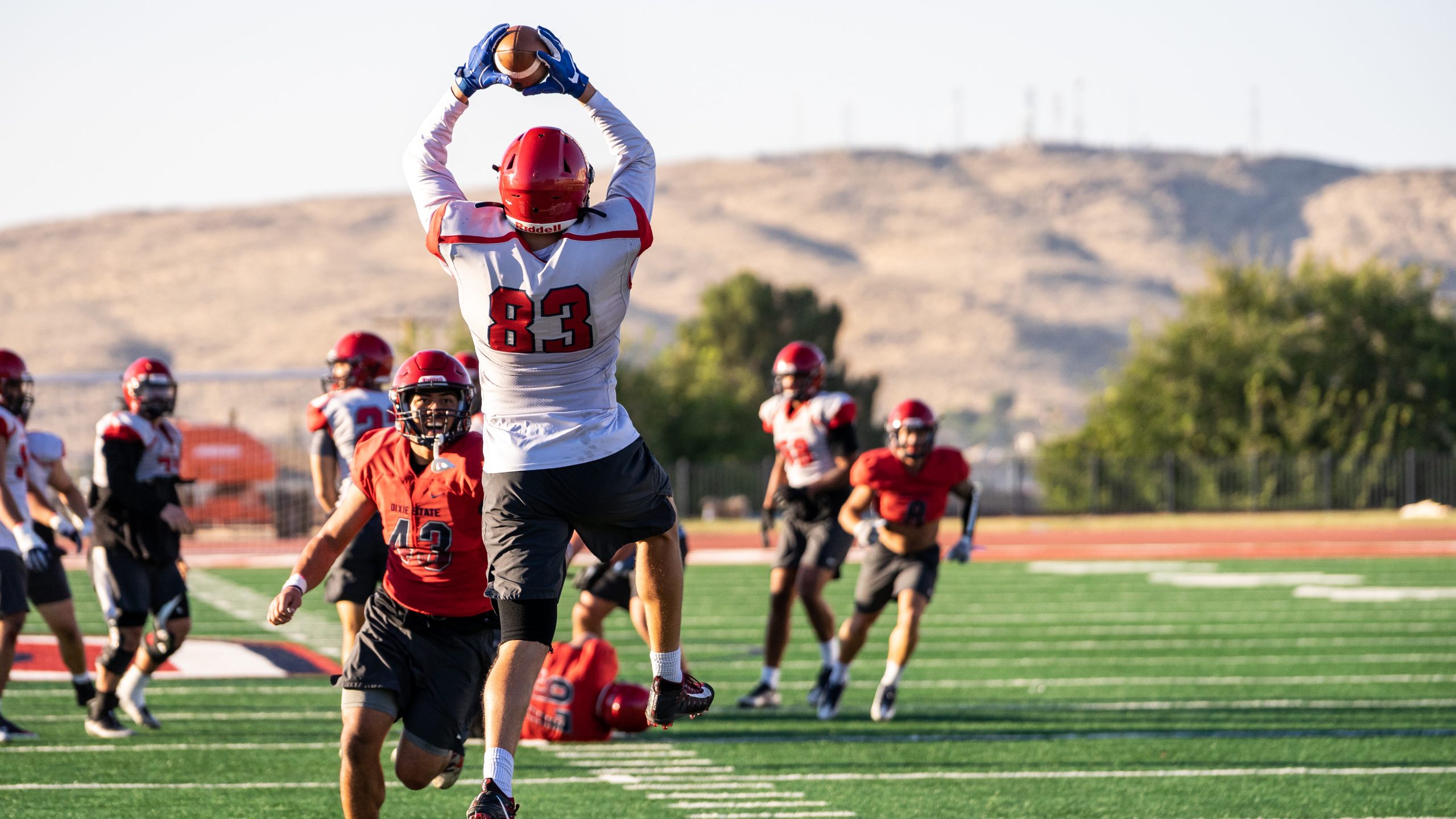 DSU football has been in full training since the fall getting ready for its Division I debut. Its season starts against Tarleton State University Feb. 27. Photo by Michael Gonzalez.

After practicing throughout fall and winter, Dixie State University football is finally kicking off its first season as a Division I program Feb. 27.

The highly anticipated season was supposed to start back in the fall, but the COVID-19 pandemic forced DSU to play in the spring instead.

“In the fall, we got a ton of work done,” Peterson said, “We used that time to help our athletes develop in the weight room and get classes taken care of.”

With the spring season underway, DSU’S coaches are excited to see the players compete against higher level teams.

“My main focus with the coaching staff is to regenerate that momentum and give our team some success and growth,” Peterson said.

The team had a lot of drive in its last season at the Division II level.

“We identified who we want to be as a program and showed some toughness,” Peterson said.

Chase Hess, a senior communication studies major and tight end from Taylorsville, is returning for his final season as a Trailblazer this spring. Hess scored a total of seven touchdowns last season.

Hess said the team is using the spring season to its advantage and has prepared well for the upcoming season despite all the COVID-19 restrictions placed upon it.

“Going into the first game really excites me,” Hess said. “We have younger guys playing their first college game and we have prepared them well. We have put in the training and now it’s go time.”

Wide receiver Deven Osborne, a senior business administration major from Los Angeles, said he is ready to compete against people other than his teammates.

Osborne said he is coming into his senior season with high hopes. Last season, he played in all 11 games and made 13 receptions for 148 yards and one touchdown.

“We’re excited to finally play some games,” Osborne said. “Our coaches have put together a great plan. We just have to execute it and take all the coaching points.”

DSU’s first football game will be at Memorial Stadium in Stephenville, Texas Feb. 27 at 2 p.m. against Tarleton State University. This will be the Trailblazers’ first game as a Division I program.

The Trailblazers are playing to win, and they will get another chance against Tarleton with a home advantage March 13. Tarleton has also accepted an invitation to join the WAC football league. These two games will be a preview for years to come.

It was also announced that DSU would participate in the WAC Football conference starting in Fall 2022. The team will also compete against fellow WAC member New Mexico State March 7.