OPINION | Google Docs vs. Microsoft Word depends on your needs 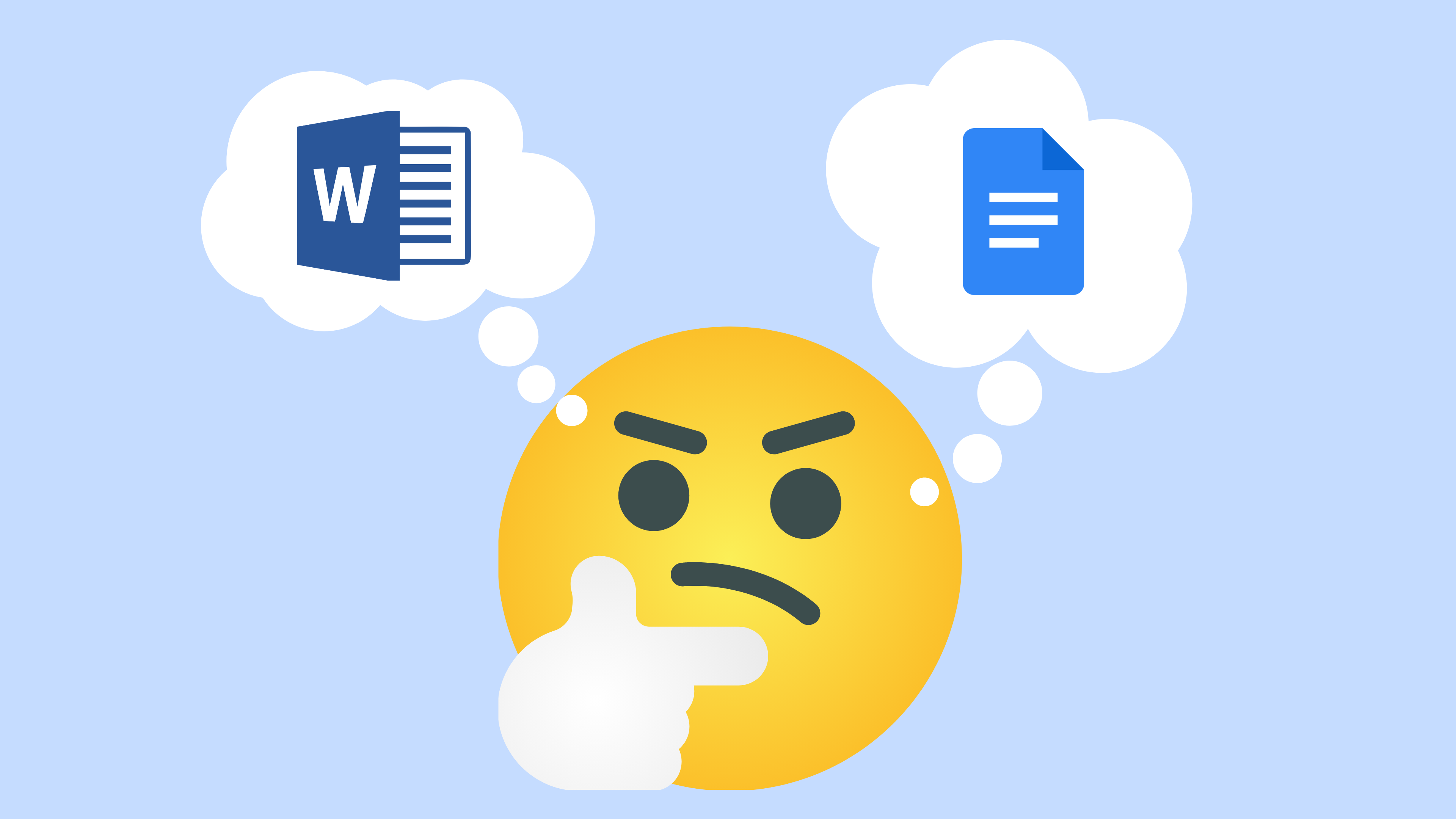 It can be a constant battle for students to decide between using Microsoft Word and Google Docs. Autumn Nuzman lays out the pros and cons of each and when to choose which one. Graphic by Emily Wight.

There’s been plenty of debate about whether to use Google Docs or Microsoft Word, but the debate should be less about which word processor to use and more about when to use each one.

Here’s a rundown of why I choose one over the other for certain purposes:

If you have to do anything more than basic formatting, Microsoft Word should be your go-to.

Google Docs tends to mess up complex formatting when you switch to a different computer or convert your file format. Google Docs can’t even handle a consistent hanging indent on a works cited page when submitting to Canvas.

Google Docs always makes at least one of my citations format incorrectly, its header margins are off, and half the time my essays are up to half a page smaller than I think they are because of general page margin inconsistency. I’ve had points taken off for all those things at least once, which is why I’ve leaned more toward Microsoft Word in recent semesters. Microsoft Word even has ways to ensure your formatting remains as it’s intended.

The auto-save feature in Google Docs is a real lifesaver, whereas Microsoft Word has nearly killed me.

I once had my laptop die as I was about to submit an essay near the deadline, and OneDrive wasn’t able to save the document. I had to beg my professor for an extension, and she didn’t give those out lightly. I’m pretty sure she only gave me the extension because my normally prepared, grade-obsessed self was so pale she thought I’d die otherwise.

Additionally, Google Docs has the ability to look at the edit history of a document, which is especially helpful when something from an old draft is useful to the current draft. Microsoft Word has a version of this, but only for files saved in OneDrive or SharePoint in Microsoft 365, and it wasn’t as detailed as Google Docs when I tried it out. The track changes feature is about as close as it gets in Microsoft Word.

That said, Google Docs’ reliance on the internet can be frustrating, especially when poor weather or the increasing number of Zoom and online learners clogs your internet connection.

The struggle of your internet going out right as you’re in the middle of typing a sentence on a dark and stormy night is annoying enough to set anyone on edge, and it’s happened to me so. many. times.

I’m not cliché or melodramatic enough to use the phrase “dark and stormy night” in my creative writing assignments, but it would be nice if I could use one to inspire some writing prompts instead of worrying about whether or not Google Docs will cut out because of my internet connection’s sensitivity to bad weather.

The best Google Docs can do is provide a Chrome extension or offline document viewing, which you have to enable for each individual document, whereas Microsoft Word can be used offline pretty much any time.

In regard to collaboration, Google Docs is superior to Microsoft Word.

Google Docs is primed for real-time collaboration, and it’s easier to see who edited what in the color-coded edit history. Microsoft Word has a similar feature, but only in the subscription-based Microsoft 365 online Word app, which isn’t even a full version of the program.

The closest Microsoft Word comes to competing in a less niche way is sending documents with track changes, but that takes longer and feels clunkier. Google Docs just streamlines the process and makes things easier all around.

The only time I use Microsoft Word for collaboration is in my editing internship since that’s what my professor is most familiar with, or when other professors require it for class. Otherwise, all my collaborative essays and projects are done in Google Docs.

When it comes down to it, familiarity will probably be the deciding factor for anyone debating which word processor to use.

Despite being trained to use Microsoft Word at various times across the span of my education, I’m probably most familiar with Google Docs since Google products have been increasingly integrated into education over the years. Think about it, even our Dmails are just university-sponsored Gmail accounts, and the same was true of my K-12 email account.

Plus, Google products are mostly free, which makes Google Docs more easily accessible than alternatives like Microsoft Word, even with the access provided by Dixie State University.

Don’t go all in on one or the other. Use both for different scenarios.