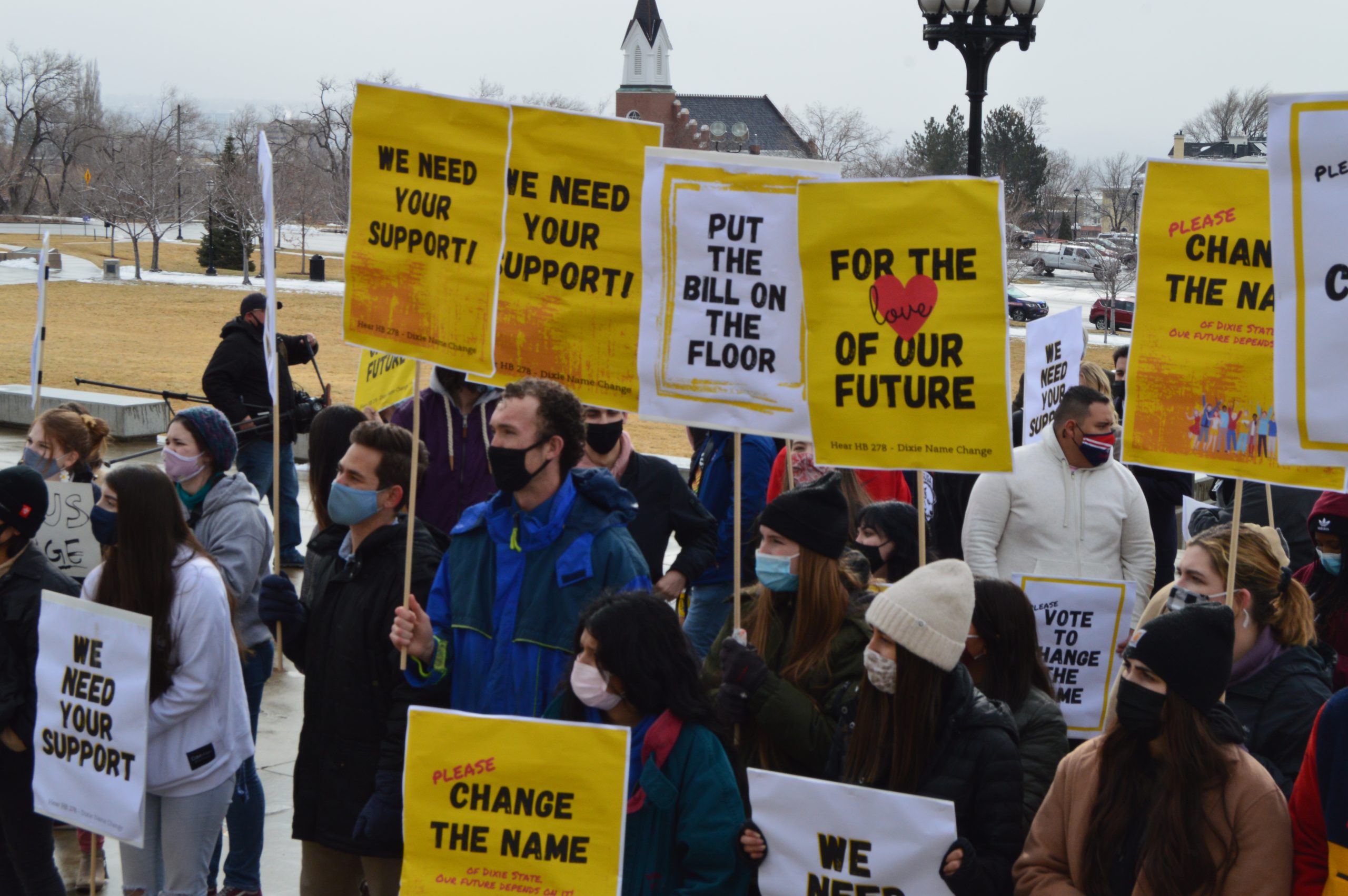 David Clark, chair of the DSU Board of Trustees, addressed students at Utah’s Capitol Hill, saying, “Once the bill is introduced, it goes to the rules committee, then to the appropriate standing committee, then finally to be debated on the Senate floor.”

Clark said he is highly optimistic about seeing the bill go through the Senate, but he is happy to see that students are involving themselves with the process.

“We’re going to get this bill heard in the Senate; we are working right now to try and figure out what that means,” said Utah Senate President Stuart Adams, R-Layton. “We are negotiating.”

Sen. Michael McKell, R-Spanish Fork, will be sponsoring the name change bill in the Senate.

“We got an overwhelming support from the House floor,” said bill sponsor Rep. Kelly Miles, R-South Ogden, who addressed the student crowd that rallied in front of the Utah State Capitol building the morning of Feb. 24 after rumors surfaced that senators did not intend to hear the bill. “That tells our senate colleagues that we’re serious about this and we’d like them to be.”

”It makes a big difference to my colleagues, I can promise you,” Miles said. “Let your senator know that we want to debate it on the Senate floor.”

Samuela Tupola, president of the Multicultural and Inclusion Student Association and a junior integrated studies major from Salt Lake City, expressed his concern over the initial rumors.

“It should go to a vote; trying to stall it goes against our values of our country,” Tupola said. “I love the university; … the university has made leaps from what they used to be. Changing the name will help to show that we’ve come a long way.”

“I came here to make sure the Senate knew we wanted our voices heard,” Mills said. “The student voice is one that should be heard the most on H.B. 278.”

Abbigail Scherzinger, student body chief of staff and a junior nursing major from West Jordan, said: “What is a university for if not to impact students’ futures for the better? We are such a great university, and I think we have so much to offer, and we’re growing so much. If we do a name change, there will be more opportunities for students and allow us to receive more professors who are currently afraid of having the name Dixie on their resume.”

On the other hand, a portion of community members feel that the Dixie name is part of their heritage and had an opposing view to the students’ protest.

The Defending Southwestern Utah Heritage Coalition, a group that is in favor of Utah’s Dixie, sent a press release to St. George News stating:

“DSUHC considers this effort to be another desperate move on the part of the University leadership which is characteristically consistent with its past behavior on this matter. It is ill–conceived, not carefully thought out, and in our view blatantly offensive to the university community, to Utah’s Dixie as especially to tax payers and parents/grandparents, many of whom are paying tuition for their children to attend DSU. While we do not object in any respect students exercising their rights to protest, we do object to student fees, tuitions, legislative appropriations, donor funds or dollars from any university sources or accounts being used to fund a trip to lobby the legislature on one side of the issue. Students also should not be encouraged to leave classes and teachers should not be encouraged to excuse them.”

Regardless of whether or not people are for the name change, students rallied to stand up for the bill to be argued on the floor rather than go unheard.

“I think that [senators] don’t want to deal with this right now because they are afraid of cancel culture even though it’s an issue that has been going for a very long time, and I don’t think it’s cancel culture,” Scherzinger said.

She said the senators owe it to the community and students to hear the bill.

Clark said, “If there is anything you should take away from all this, [it’s that] you may not have an interest in politics, but politics certainly has an interest in you.”