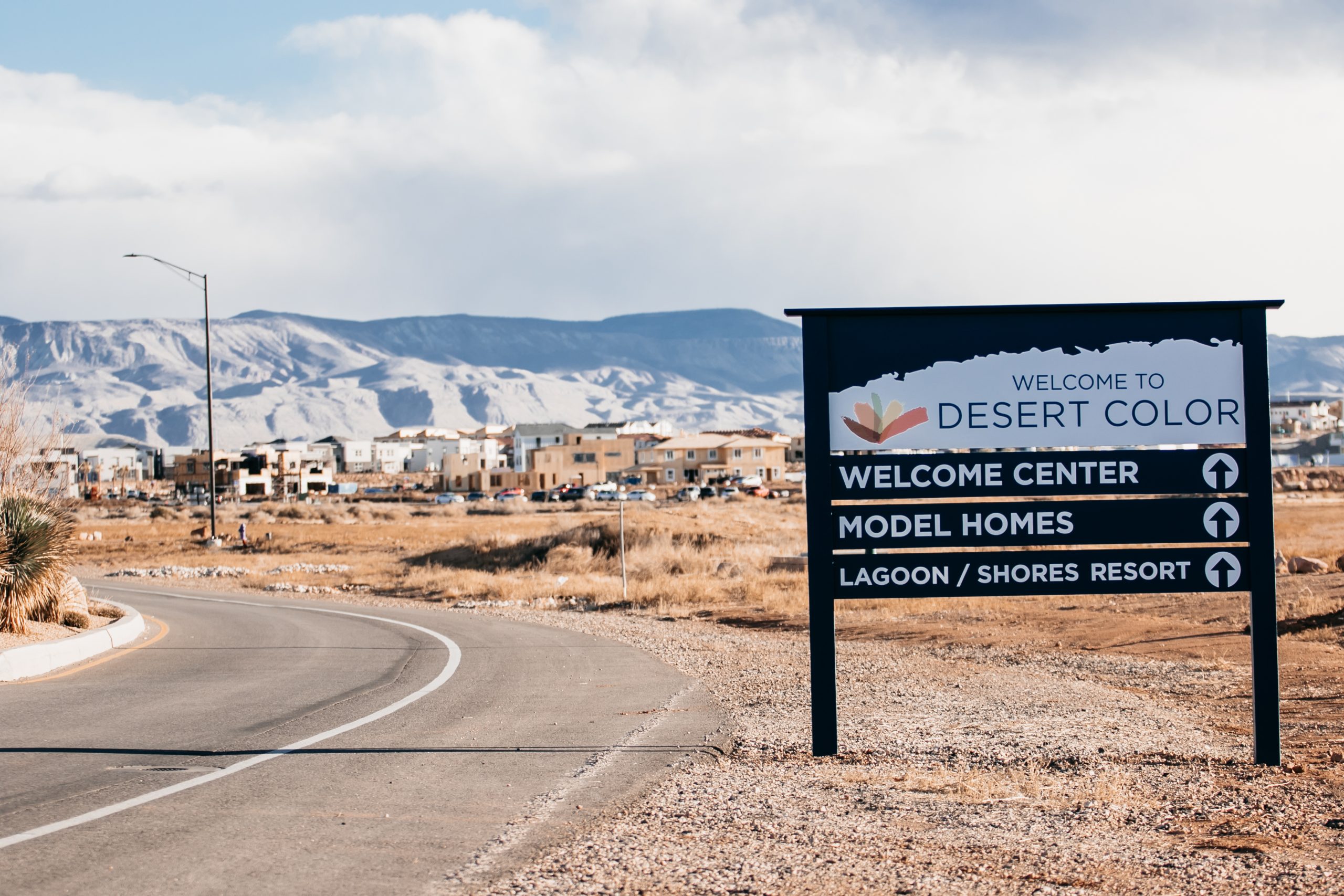 Desert Color is a development area south of Dixie State University's campus. The DSU administration is in the process of purchasing Desert Color property to allow more room for its rapid growth. Photo by Bailey Chamberlain.

Dixie State University is in the process of purchasing land in the Desert Color property after delays from the COVID-19 pandemic.

President Richard “Biff” Williams said the university is planning to build a second campus on the Desert Color property because of DSU’s rapid growth.

“We were granted $15 million for 183 acres, but when COVID-19 hit that was all taken back; all building projects and one-time funding were taken back,” Williams said. “This year we have re-requested the land.”

Henrie Walton, assistant to the president for government and community relations, said now DSU is just going through the process in the Utah State Legislature.

“Our hope is that the Legislature will be able to fund some of those priorities that they would’ve liked to have last year, this year,” Walton said.

Walton said the request for funding is being reviewed to be included in a bill that will be voted on by the entire Legislature later this year. The funding to purchase more land for DSU was passed last year, so the university has high hopes that it will pass again this time around.

Paul Morris, vice president of administrative affairs, said DSU is getting close to having no more room to build without losing something that they already need. He said the campus really is too small, and the property around the main campus is very expensive and there isn’t a big enough piece to do much with. He said DSU is small compared to most campuses.

Williams said DSU was looking for a large property in one spot to avoid having a lot of micro campuses all over St. George and just have two main campuses.

“That was a spot that allowed that amount of land, but we were also attracted to the Desert Color Development,” Williams said. “We know students are going to live out there because there will be more apartment complexes, [and] there will be a lot of businesses, so students will probably work out there and there will be more housing neighborhoods.”

Williams said this will be more convenient for those who are not traditional students, such as parents. The campus will also be near possible health care opportunities, the airport and an upcoming career technical high school in the Washington County School District, he said. However, with the location not being within walking distance of the main campus, it may pose difficulties for students.

“We would love to have 183 acres right next to our current campus, so we’re going to have to be really creative to blend the two campuses,” Williams said. “We won’t want students having to go back and forth all day long, so what can we offer out there so a student can stay there or here all day to have minimal interactions between the campuses?”

Williams said he is hopeful for a smooth transition when the Desert Color property becomes more developed.

“Washington County is projected to have over 500,000 people in the county by the year 2065,” Walton said. “That’s over a 229% increase, and it will be one of the fastest growing counties in the nation. What the university wants to do is ensure that we can provide the educational capability and resources to a community of that size.”

When more of the second campus and Desert Color area is developed, DSU will begin finding ways for students to have free transport back and forth between the two campuses.

“Right now the students, faculty and staff get a SunTran pass with their student body pass, so we would have to work with the city to see if we use the SunTran or make our own Trailblazer Express,” Williams said. “There will have to be some type of transportation for those who don’t have any.”

Williams said this is really exciting because the Legislature is recognizing DSU is growing and maturing as a university. It’s not only recognizing the school’s growth, but the community’s growth as well.

“This university is going to have to be the epicenter of economic development, of educating students and providing the workforce,” Williams said. “This 183 acres is really futuristic, it’s exciting, it’s something that most campuses don’t all of a sudden get, so this is a pretty big deal.”