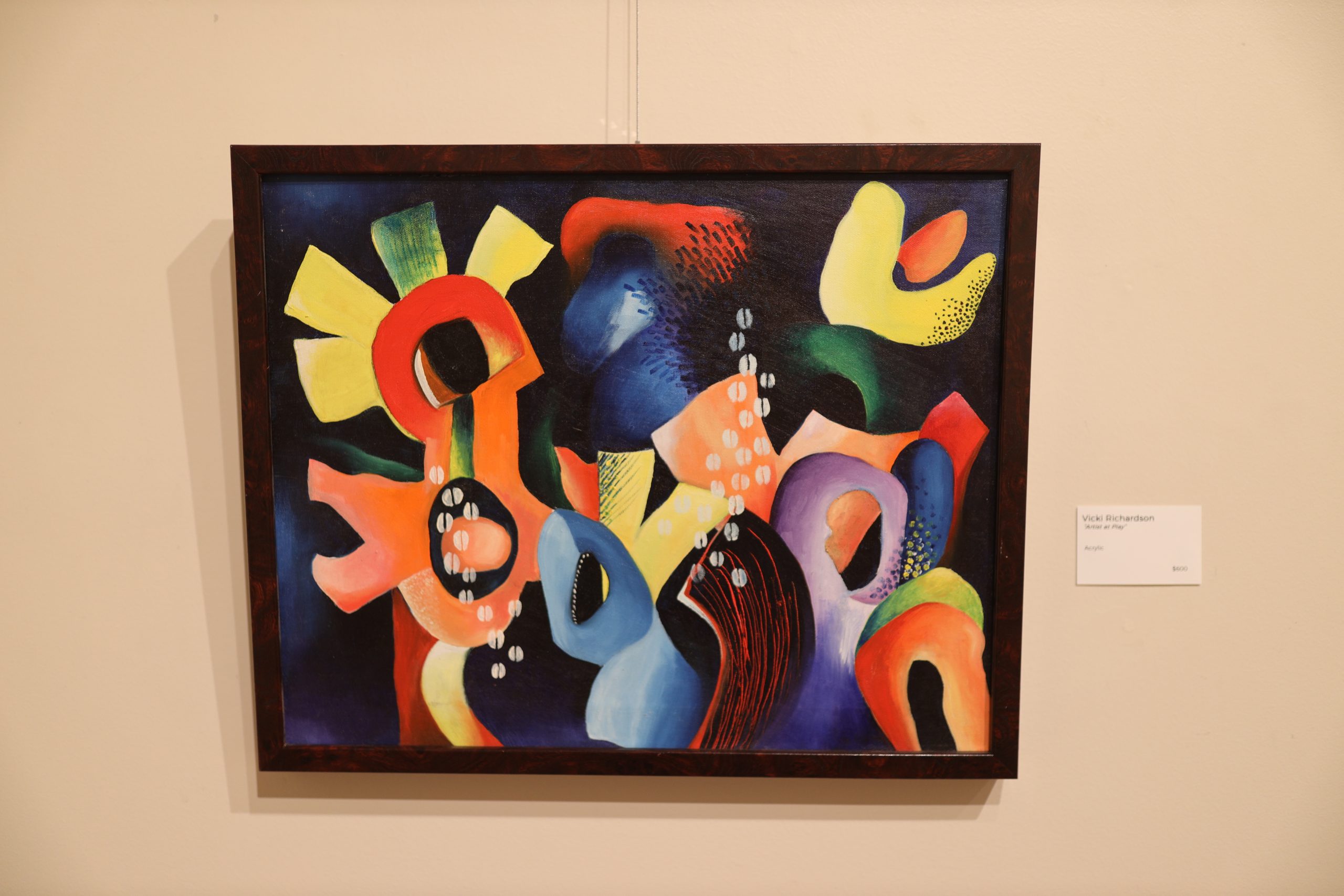 “Artist at Play” is featured in the Black Lives Matter art exhibit located in the North Plaza Art Gallery. It is a great opportunity to learn about different cultures and history. Photo by Misha Mosiichuk.

With time flying by so fast, we may forget that February is Black History Month — a time to learn about and appreciate African-American culture. For so many years in this country, segregation prevented America from appreciating African-Americans’ rich and colorful culture and contributions to society.

At Dixie State University, a Black History Month art show has been implemented in the North Plaza Art Gallery through Feb. 26. The exhibit is displaying artwork by Vicki Richardson, an award-winning artist and co-founder of the non-profit Left of Center Art Gallery in Las Vegas.

Art professor Dennis Martinez said DSU has been presenting a Black History Month art show for the last seven to eight years. The university has always collaborated with the Left of Center Art Gallery and had a range of artists and art pieces submitted to be shown, Martinez said.

Richardson said she works in a variety of mediums in an effort to set a mood or scene to represent something that is happening. She said she is trying to tell a story about things like the starving children in Rwanda and the protest movements of the late ’60s and early ’70s with Martin Luther King.

“I’m trying to open up conversations about the situations that are in the pictures,” Richardson said. “Hopefully, it will encourage some dialogue about race relations in this country and historic disregard for human life.”

Richardson said a piece that connects with her emotionally is titled, “We Shall Overcome.” It is a picture of a black child sitting on the street at the feet of adult protestors with placards on the ground that say, “We shall overcome.” The boy has on the shirt of one of the most prestigious black colleges, she said.

“I think if a person really looks at the picture deeply, they can see themselves at the feet of people, but seeing objects that show you really might just overcome and become like a college graduate.”

Alex Chamberlain, department chair and associate professor of art, said it is important to show things such as Black History Month in artwork because of the sheer differences in people. He said it’s important to introduce diverse history and culture into areas that don’t have much experience with those things.

“At its core, art is about communication,” Chamberlain said. “Every single culture of Earth has created art for thousands of years, and in some instances it’s the only record we have of them. It’s very important that we recognize that the way that everybody sees the world is equally worthy of consideration, education and understanding.”

Chamberlain said DSU lives in a place that lacks a lot of diversity, which means it takes extra effort on behalf of faculty and students to be exposed to new ideas. DSU cannot provide as much exposure as a university with a more diverse population, he said.

He said he has grown up in Utah, and his personal faith puts emphasis on family and knowing your roots. He said it’s always been easy for him to find and access that information. Chamberlain said he’s learned that it’s not as easy for African-Americans.

“In an article I read, it said that African-Americans at large cannot trace their family history back past a certain point because it just stops,” Chamberlain said. “Personally, I’ve always viewed Black History Month as this effort to try and preserve and spread the history that we can find that would otherwise just vanish.”

Chamberlain said by inviting artists with more diverse backgrounds and experiences to come to the campus and share their work with the community, DSU gains some of the ideas it doesn’t already have.

Richardson said this kind of artwork is a way to communicate and share stories and history with someone. She said students should come so they can be involved in the conversation that she is providing with her art.

Richardson said sharing stories keeps some of our history alive, and that can’t be anything but a good thing. She said her artwork is an opportunity to share stories of people who can’t as easily share their history with the world.

“They can take it and try to look closely, and try to dissect it, put themselves in the shoes of the people in those pictures,” Richardson said. “It gives them a chance to see their faces and is a chance to reflect.”

Part of history is to understand the pain and suffering of other cultures and races, Richardson said, and that art is a great way to show those emotions.

This art show is allowing students and faculty to have an opportunity to learn about a whole history and culture that they may not know about, Chamberlain said.

“I probably don’t have the expertise to be a large voice in this conversation; I have not been a minority in many places in my life,” Chamberlain said. “Let the work speak for itself, and I hope that nobody takes what I said as [such] a sufficient summary of this show that they don’t see the show themselves.”