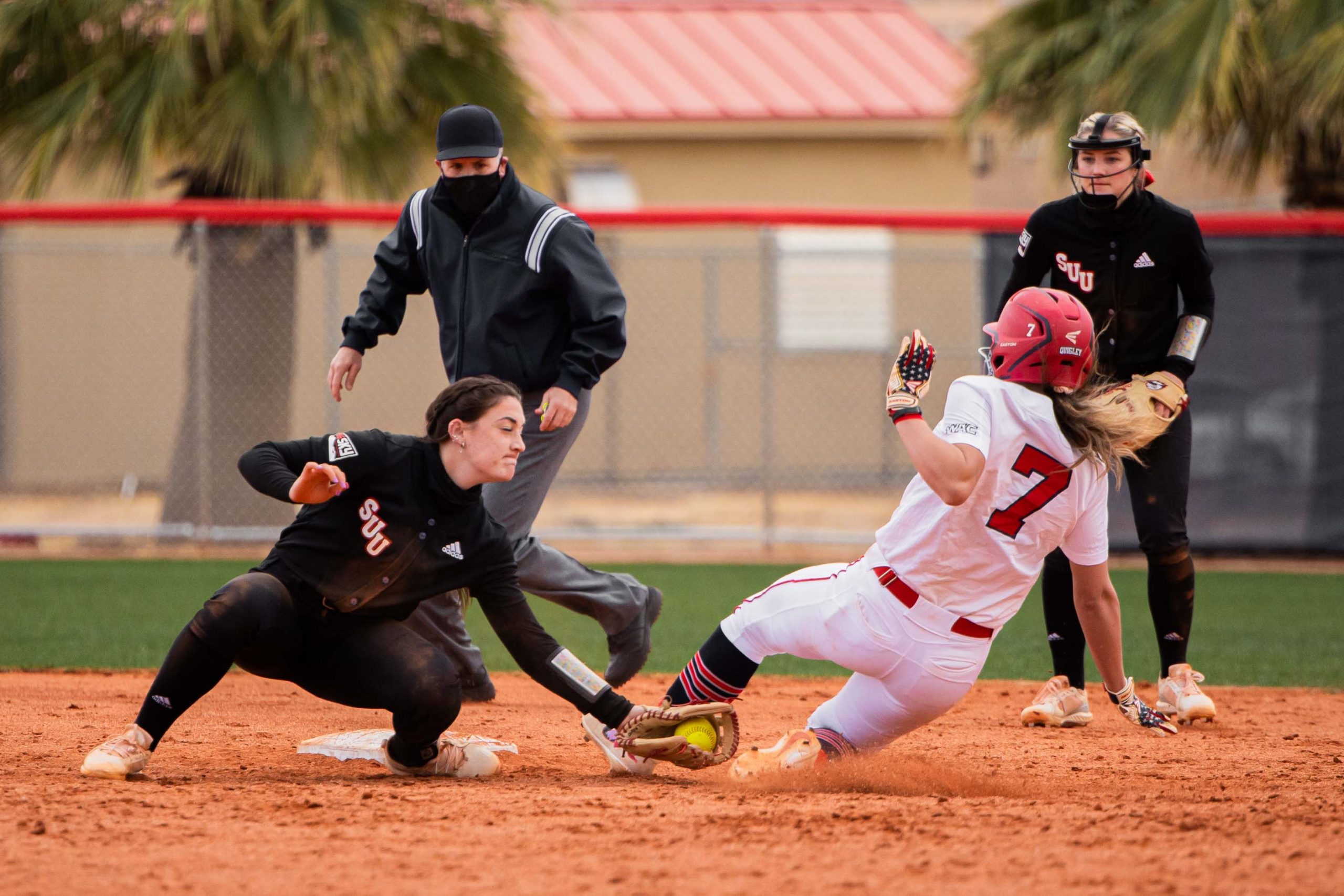 Kirsten Quigley, a senior medical laboratory science major from Orthello, Washington, slides to a base in DSU’s game against SUU on Feb. 16. The Trailblazers fell 12-6 against SUU. Photo by Breanna Biorato.

Just 52 miles separate Dixie State University and Southern Utah University. Both programs had their softball team take the field to play against each other for the second time this season. DSU and SUU will battle it out two more times this season, creating a strong rivalry between the two programs for the years to come.

Just three days prior to this game on Feb. 16, DSU and SUU played in the University of Nevada Las Vegas Tournament where the Trailblazers came out on top with a 6-5 win.

“I definitely think we were all excited for this game,” said Megan Anders, a senior exercise science major from Las Vegas. “As a senior, I was pumped, and I know everybody kind of doesn’t like SUU, so we were ready to get back on the field.”

“We’ve got to do a better job of cleaning things up and not making as many mistakes as we did today,” head coach Randy Simkins said. “We are still finding ourselves a little bit.”

However, after giving up eight runs during the first two innings, the Trailblazers found themselves still in the game after impressive at bats for themselves. After scoring three runs in back-to-back innings to start the game, DSU wouldn’t score again. DSU fell short in the competition on Feb. 16, losing 12-6.

“We put a lot of hits on the board and hit well,” said Mikayla Thompson, a senior communication studies major from Herriman. “We have a lot to grow from here and we are excited for the season.”

DSU totaled 13 hits in the game.

DSU plays its first match against Washington Feb. 19 at 1:30 p.m. The Huskies have outmatched the Trailblazers so far this year, winning both of the games played against each other in the UNLV Tournament.

“We’ll be tested this weekend; there are a lot of really good teams coming to town,” Simkins said. “These top-quality teams and pitching will hopefully get us ready for [Western Athletic Conference] play.”