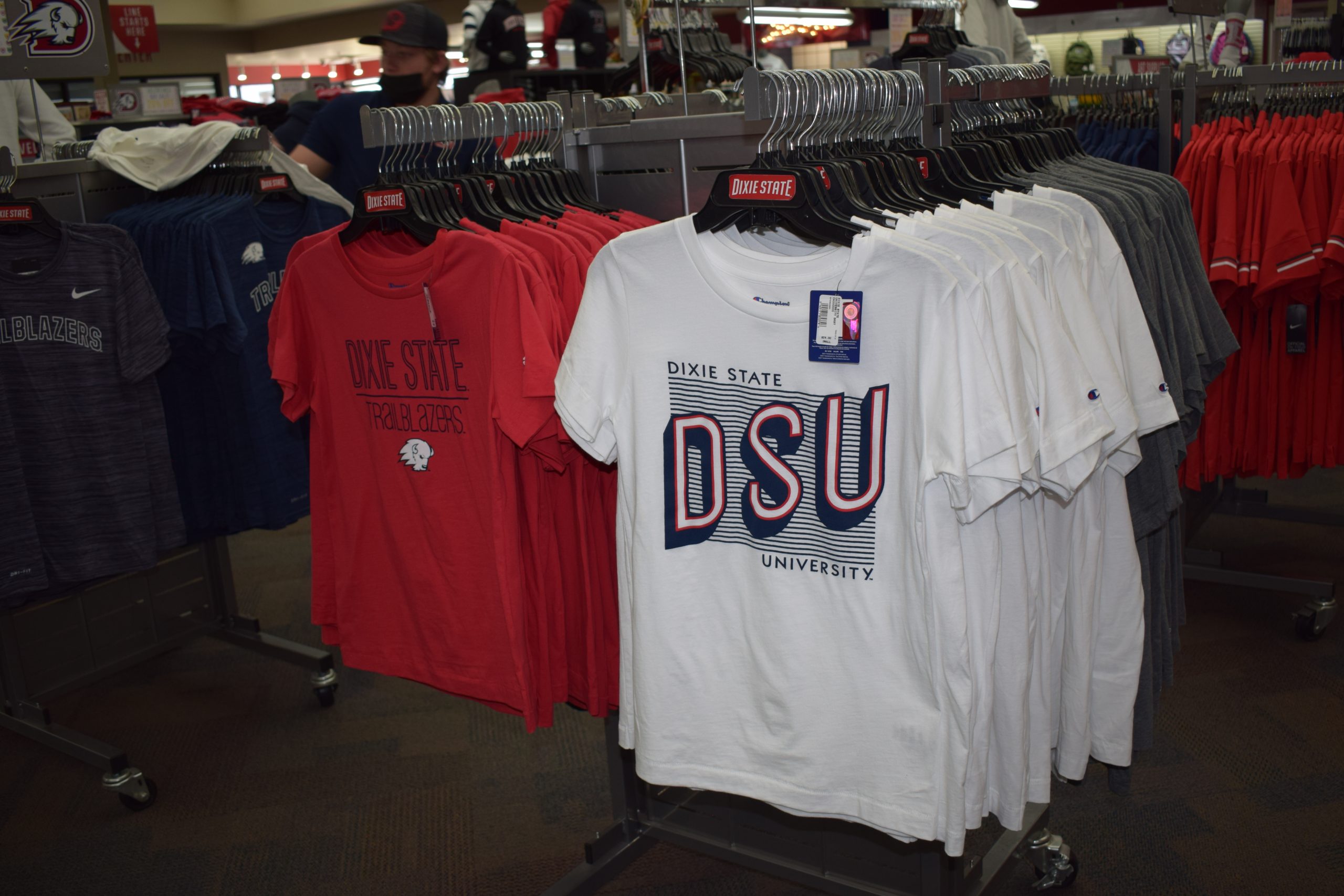 Dixie State University apparel is not available in Dick’s Sporting Goods due to controversy surrounding the “Dixie” name. The university hopes to mend its relationship with businesses who have refused to be associated with the university. Photo by Bailey Chism.

Dixie State University officials have said businesses have refused to partner with DSU due to the name.

DSU has not engaged in any discussions with these businesses about their future relationships, but it is something they will consider as the name change goes forward.

“Partnerships provide invaluable resources for the benefits of students,” said Jyl Hall, director of public relations. “So, we will do anything we can to team up with community partners.”

DSU hopes the name change will mend any partnerships that may have been lost due to the negative connotation of the name “Dixie.”

DSU will lose resources from businesses like Dick’s Sporting Goods who helped lower tuition through donations.

Hall said, “Donations provide additional resources, equipment and facilities that benefit students and bring down the cost of tuition in the long run.”

“Dick’s cited social and racial injustices across the country, and how it’s resulting in controversies involving school’s mascots, names and logos that have ties to slavery for the reason making this decision,” Hall said.

DSU officials said other businesses have approached DSU and expressed their interest in a partnership after the name change, but have not publicly shared their stance.

Hall said as DSU administration members received more feedback from companies as well as student stories and employer concerns, they realized they needed more data on the impact of the “Dixie” name. This caused DSU to launch the full impact study in the fall 2020 semester.

“Many factors went into the name change recommendation, but yes, major partners refusing to work with DSU was part of the decision,” said Jordon Sharp, vice president of marketing and communications.

Dilley said the university is currently talking with the California Community College system about the possibility of establishing transfer partnerships and articulation agreements, but representatives from the Chancellor’s Office have expressed their concern over the DSU name. The representatives told Dilley they would not pursue any official partnerships unless the name changes.

“From an enrollment perspective, we are confident that changing the name will only have positive impacts on any lost, current or future relationships and partnerships,” said Darlene Dilley, associate provost for enrollment management.

Not only is it affecting company relationships, but it’s also affecting the admission rates as well. DSU has received emails from future students advocating for the name change. Dilley said there have also been students who committed to attending in fall 2021, but backed out of the semester because of the name.

Dilley said the growth of the university is dependent on this change; it will benefit students, the community and help the hurt that has been brought on by the negative effects of the Dixie name.

“We know that many of our current students and recent graduates are being hurt by having the word “Dixie” and all of the negative connotations that are attached to it on their resume or diploma,” Dilley said. “The name must change and it must change now.”