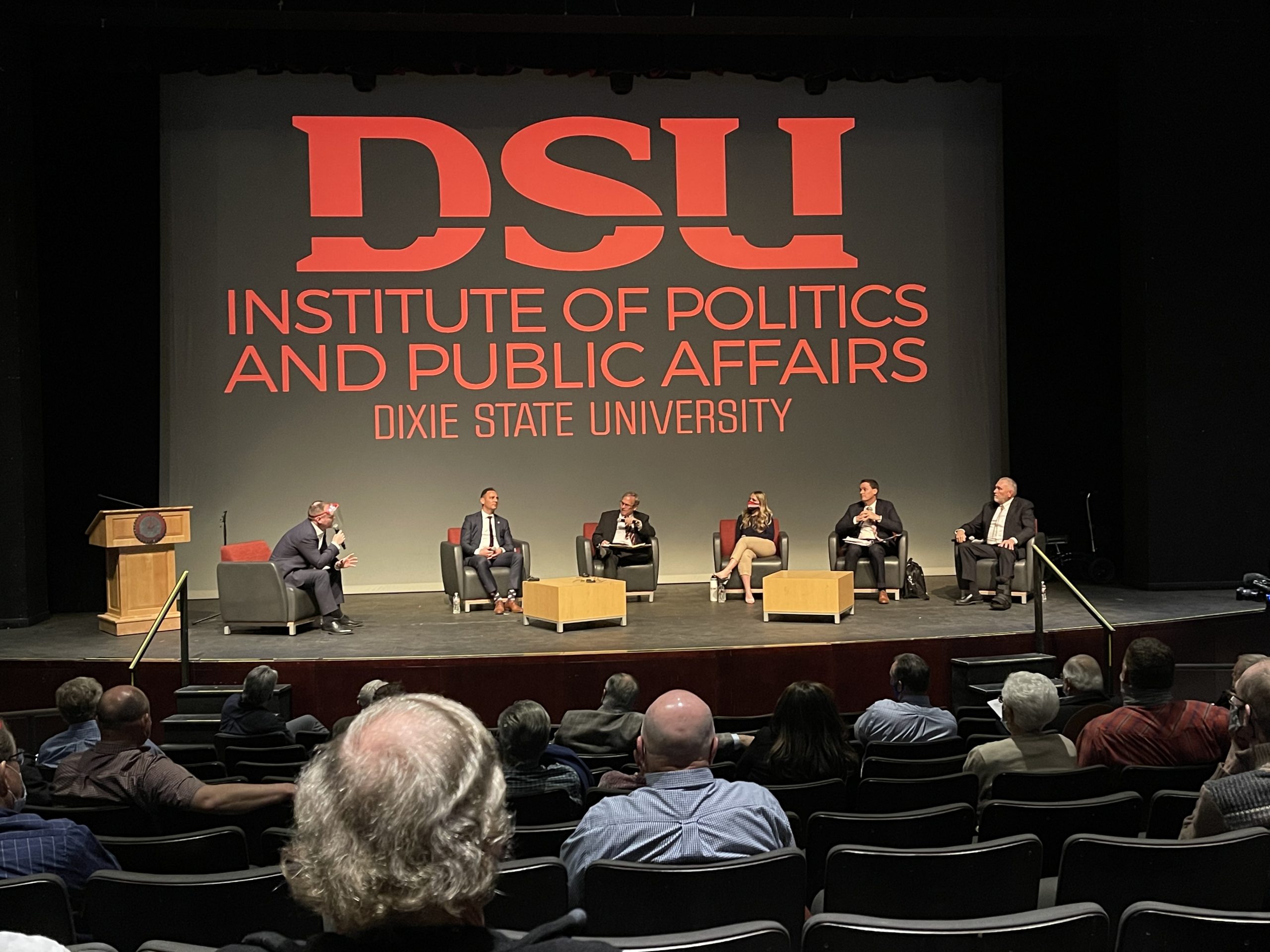 The Dixie State University Institute of Politics hosted a five-person panel on Jan. 21. The panel turned into a heated discussion about the effects of the name change. Photo by Sydney Berenyi.

A five-person panel made up of Dixie State University representatives and two local lawyers discussed the university’s name change in an emotional exchange Jan. 21.

The Eccles Mainstage Theater quickly filled with DSU students, alumni and local community members. Vince Brown, moderator and director of the Institute of Politics, welcomed everyone to the event.

“This event is less of a debate than it is a discussion,” Brown said. “There’s plenty of debate out there in the community about this issue already, and sometimes when you get involved in a point-for-point debate people just look to win instead of look to learn.”

The discussion led to a heated exchange between Anderson and Sharp about the effects of the name change.

Anderson compared DSU’s name to Transylvania University to further his argument. He said although we associate Transylvania with Dracula and the monster he is, that name did not offend nor affect the many successful students who attended and graduated from there.

Sharp replied to Anderson’s analogy and said: “We’re talking about an analogy of a fictitious character who never really hurt anyone. [Compared to Dixie where] we’re talking about a real story. The lowest moment in American history, where we were battling against each other and one side was battling to enslave others.”

Sharp said he understands the meaning of ‘Dixie’ in southern Utah does not have the same meaning as the ‘Dixie’ used in reference to the Confederacy, but lately there have just been too many issues that have negatively impacted students and alumni because of the name.

Brown had to ask the audience several times to quiet down and refrain from commenting about the ideas being presented by Sharp on stage.

“My point is, a name is what you make it,” Anderson said. “We can’t blame our shortcomings on a name, and so that’s one of the things that concerns me here because I hear that in the narrative and I’m concerned that we shouldn’t be that weak at this point. [Dixie] is too strong of a brand.”

Christensen shared stories of several professors being ostracized or even laughed at by other employees from different institutions because of representing the Dixie name.

“When [faculty] travel and do ‘Dixie’ business outside the state, in a very real way we wear the ‘Dixie’ uniform,” Christensen said. “We are in the front lines of ‘Dixie’ versus the world and we’re the ones who get bloodied and beat up because of the name.”

Anderson said faculty and staff should be proud of the institution they work for despite the name and possible ridicule received because of it.

“It’s sounds to me that these faculty came here to work, and [they’re] very timid if they can’t stand up and tell their story,” Anderson said.

The Institute of Politics hosted this event to “facilitate discussion, to be the arbiter between different points of view, and to promote free speech and free exchange of ideas,” Brown said.

Sharp also briefly explained that the DSU administration hired an outside consulting firm, The Cicero Group, to conduct an impact study of keeping the “Dixie” name.

Blanchard said those who decide to study the impact study data need to read it critically because the first section strategically includes several anecdotal stories and innuendo that the public cannot verify. He recommends for everyone to study the numbers and data itself.

“When you get to the data itself, it’s remarkably consistent and almost unchanged from the 2013 study [DSU] did,” Blanchard said. “If you look at ‘strong support for the name’ versus ‘strong opposition for the name,’ it’s 12-to-1 in this community — meaning 80% of community members support keeping the Dixie name.”