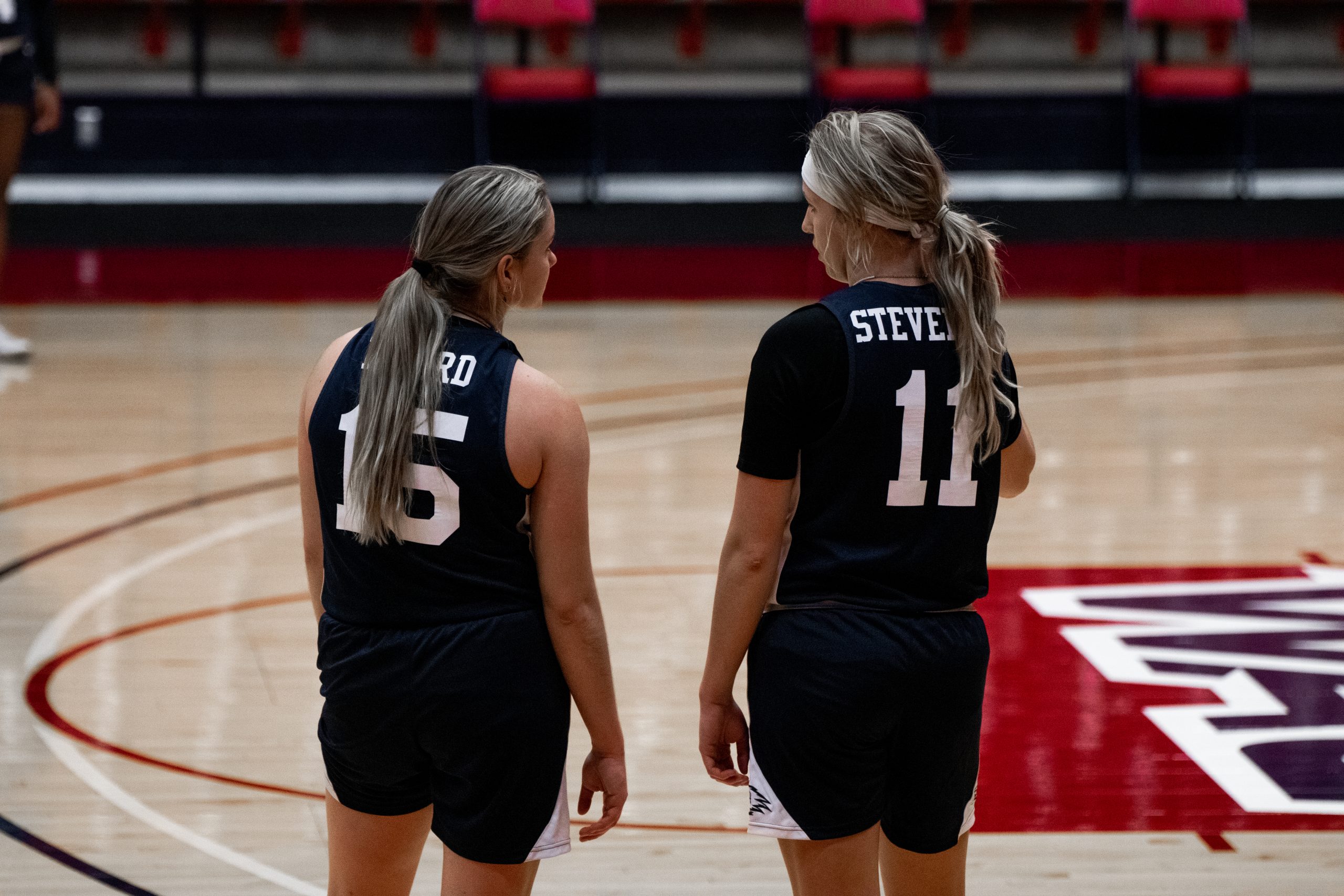 Keslee Stevenson, a senior exercise science major from Willard, and Maggie McCord, a sophomore general studies major from South Jordan, are practicing on the court. The remainder of the women’s basketball season was canceled due to health concerns. Photo by Breanna Biorato.

As the rest of the Dixie State University sports teams are playing or getting ready to play debut seasons in the Western Athletic Conference, DSU women’s basketball will have to wait for its WAC debut following the season’s cancellation.

DSU women’s basketball was slated to start WAC play on Jan. 8 and 9 against New Mexico State University, but those games and the remainder of the season were canceled three days prior.

In a press release put out by DSU Athletics stated, “The decision was made with the overall health and wellness of the student-athletes and program in mind.”

DSU Athletic Director Jason Boothe said the situation with women’s basketball was specific to the program and the team’s “internal issues,” though Boothe declined to comment on specifics about what those issues were. He said all other teams are still planning on playing their respective seasons in the most normal fashion possible.

“I hope that we don’t have to make the same decision that we did for women’s basketball for other sports,” Boothe said. “But if we have to, given the information and circumstances we’re faced with, we’ll take a good look at it. It’s not an easy decision or one that we take lightly.”

Although there is still the possibility for canceled games due to COVID-19, the expectation is to continue to play for all the other teams at DSU.

The decision to cancel the women’s basketball season was not solely made by administrators, though. Boothe, head coach J.D. Gustin and the team’s players were all allowed input on the decision, and ultimately the best outcome for everyone was determined to be to cancel the season.

Boothe said: “Coach Gustin was in constant communication [with the team] for a long period of time about this.”

DSU women’s basketball played three games before the season’s cancellation. The team was 1-2 this season, the only win coming over Park University 81-52 on Dec. 12.

The cancellation will delay the team’s formal WAC debut until the 2021-22 season, but due to COVID-19, additional eligibility policies put out by the NCAA, members of the team will not lose a year of eligibility.

“We’re not alone [in this decision],” Boothe said. “Is it hard? Yeah. Would we like to have played in the WAC to kind of get a barometer and see where we’re at? Of course. But the positive is, we’re going to continue practicing on a more limited basis, so we’ll still get the skill up and get better and be ready to go for next winter.”

The players and coaching staff are not granting interviews on the season’s cancellations.