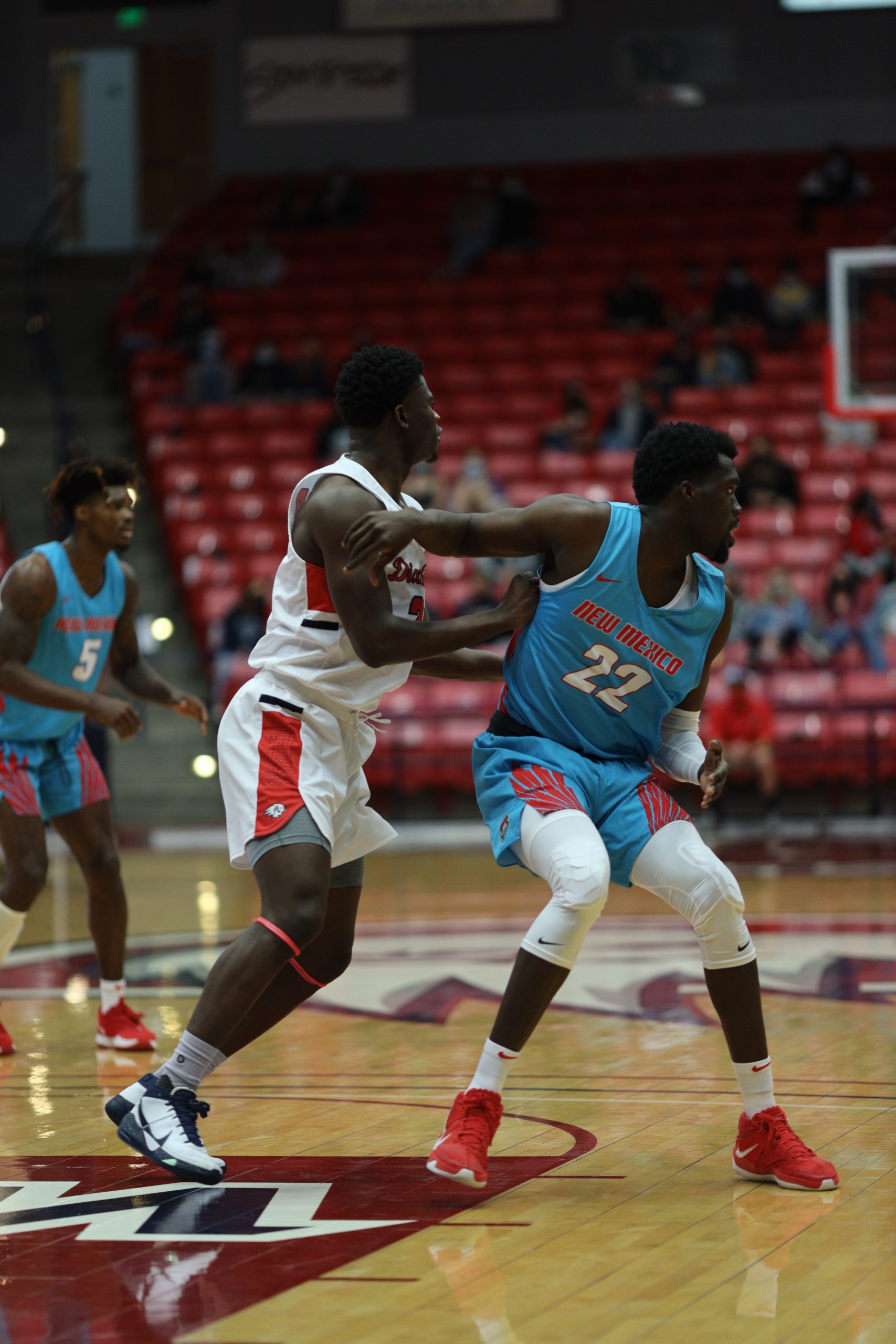 Andre Mulibea, a freshman general studies major from Salt Lake City, takes on the New Mexico Lobos in the Burns Arena Jan. 13. The team is working on keeping each other's spirits up during the difficult season. Photo by Misha Mosiichuk.

“Whatever it takes.” That’s the motto this year for the Dixie State University men’s basketball team to help them overcome the challenges of the COVID-19 pandemic.

Even though DSU has been fortunate enough to play as many games as it has, it could’ve played more teams. The Trailblazers have had five games canceled and a doubleheader postponed until the end of the season because of COVID-19.

Head coach Jon Judkins said it’s challenging to coach during these uncertain times because as soon as games get canceled, the team gets mentally down.

Judkins said: “[This whole COVID-19 situation with games], it’s just up and down, up and down. We tried to give [the team] some days off, try to keep them fresh because of the long delay between games, just keeping their mental toughness. People don’t realize how tough this is on these kids, but they all want to play. They all want to do it and it’s a good thing.”

Forward Jacob Nicolds, a junior business major from Gilbert, Arizona, said the team members keep their heads held up high by looking at the bigger picture and realizing other teams are going through the same thing.

Nicolds said: “We can’t feel sorry for ourselves and just kind of dust it off. We’re going to have more practices if a game gets canceled, so we got to keep getting better then and hopefully apply it into the games when we do have them.”

Through the seven games the Trailblazers have played, the two standout players on the team have been Nicolds and guard Cameron Gooden, a junior sports management major from Frisco, Texas.

Gooden is second in points for DSU with 83 and leads the team in assists with 26, which lands him No. 6 in assists among other WAC players.

Gooden said learning to become the best athlete he can be from junior college has helped him become an impact player for the Trailblazers and transition into DSU’s playstyle.

Nicolds is making an impact on both sides of the court for the men’s basketball team by leading the team in points with 90, having the highest field goal percentage, grabbing 34 rebounds, and is second in steals with 10.

Nicolds said he started getting playing time at the end of last season but took advantage of time with coaches during the offseason.

Judkins said these non-conference games have taught him to take advantage of what the other team does. When Judkins has his team watch films, he’s making sure they take note of how certain players do certain plays, such as how the other team is guarding a ball screen or a different play.

The Trailblazers will begin conference play on the road against the University of Texas Rio Grande Valley for a weekend doubleheader.

Judkins said the challenges heading into conference play are traveling and keeping his team healthy, as well as making the adjustment to play doubleheaders because his team hasn’t experienced that type of schedule format before.

DSU will take on the Vaqueros for a doubleheader Jan. 15-16 to lead off conference play.