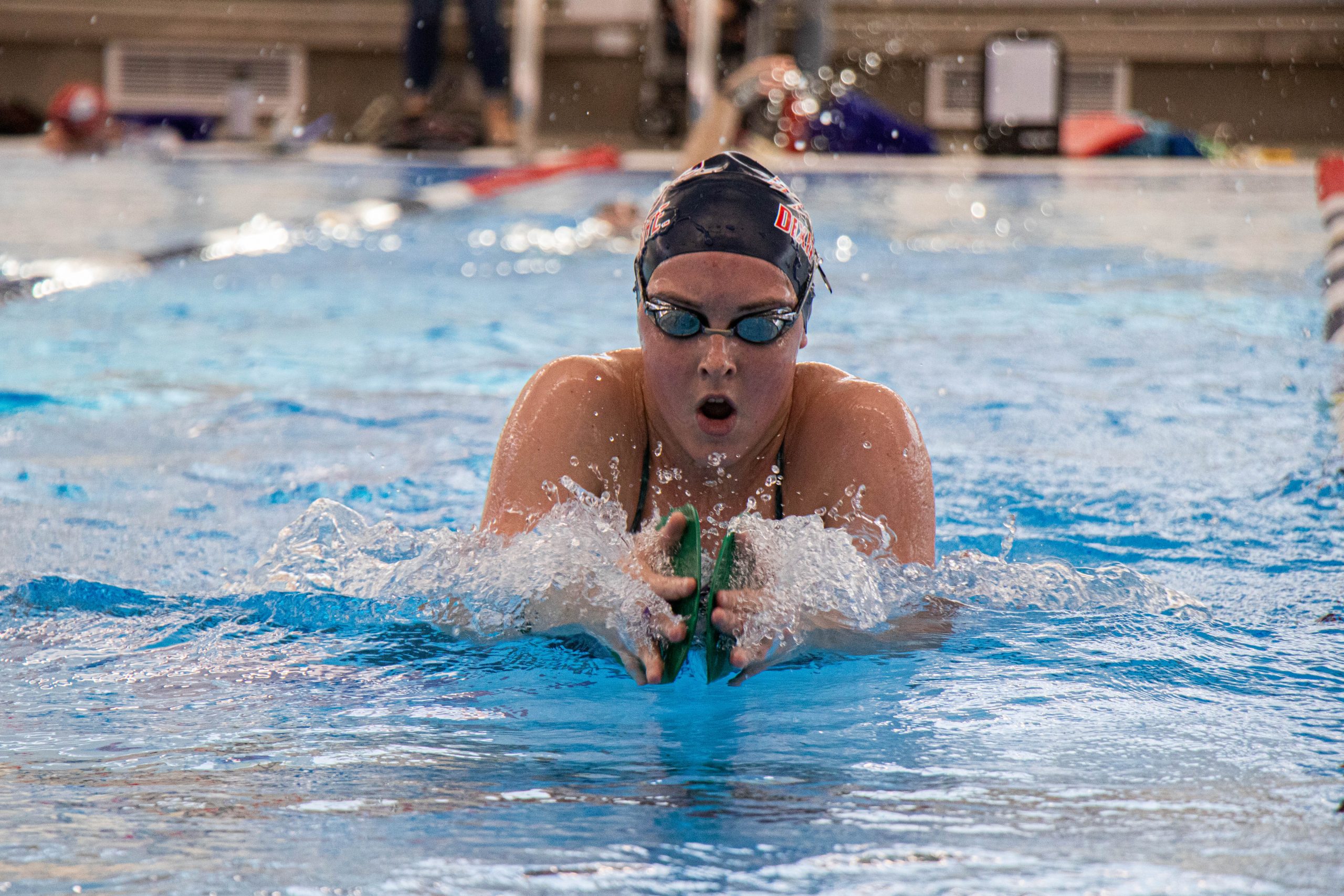 Mycah Hoppie, a sophomore mechanical engineering major from Hillsbro, Oregon, practices her swimming technique at a swim practice in 2019. The women’s swim team had their first meet of the season, marking the official beginning of the first Division I season for Dixie State University. Photo by Breanna Biorato.

Dixie State University has officially made the jump to Division I competition now that the women’s swim team has had their first meet against Brigham Young University.

For the first meet in the DI era, DSU’s swimmers had a strong showing and proved this team is a force to be reckoned with in DI and the Western Athletic Conference.

“[The team’s excitement] had pent up a little bit, waiting for the first meet,” head coach Tamber McAllister said. “They did a great job putting it all out there.”

Putting it all out there is an understatement as the team set two school records and got an event win in this dual meet. Haley Altman, a freshman elementary education major from Johnson City, Tennessee, stood out in this meet. Altman helped the team get second place in the 200-yard medley and individually broke DSU’s school record for the 100-yard breaststroke with a time of 1:01:97 (altitude adjusted).

“Breaking records this early in the season is a huge achievement,” Altman said. “With everything that’s been going on it’s great to see that we can still accomplish our goals.”

Altman was named WAC Swimmer of the Week for her showing against BYU. McAllister was excited about the results her team brought as a whole, but with Altman specifically, McAllister was not surprised by her success.

“We knew she would be a stand-out swimmer when we recruited her,” McAllister said.

Despite the team’s success, the players were mostly just excited to get a chance to compete. After following COVID-19 protocols and not having any outbreaks, the team finally reaped the reward and got to compete.

“We’ve been taking a lot of precautions so that we will be able to have a season and have all been diligent about trying to stay safe these past couple months,” Altman said. “Lots of mask-wearing and the chlorine definitely helps too.”

The team mainly had to worry about keeping distance from one another to avoid spreading COVID-19. With swim not being a contact sport and COVID-19’s inability to be transmitted through pool water due to the chlorine, it was more about being cautious outside of the pool and in team members’ day-to-day lives.

With the first big meet out of the way, DSU women’s swim now doesn’t have another meet until Jan. 15. The team is looking forward to using the time to make adjustments and get better.

“Their fitness levels are there,” McAllister said. “So now we’re going to be working on improving their skills.”

“[The break] gives us time to continue working hard and prepping ourselves for the next meet,” said Alaina Otterstrom, a junior biology major from Salem, Oregon. “Since we were able to race against BYU, we know what we need to improve before we race again. These two months give us time to work on the smaller details of when we compete.”

The swim team’s next meet is against Northern Arizona University, a school they competed against last season, but didn’t perform the greatest against. Otterstrom and McAllister both have seen a lot of growth from the team and think their second meeting will be an even better showing.

“I think it’ll be exciting to compete against NAU for the second time,” Otterstrom said. “Our team has grown a bunch since we raced them last year, so it’ll be cool to see how we perform against them now.”