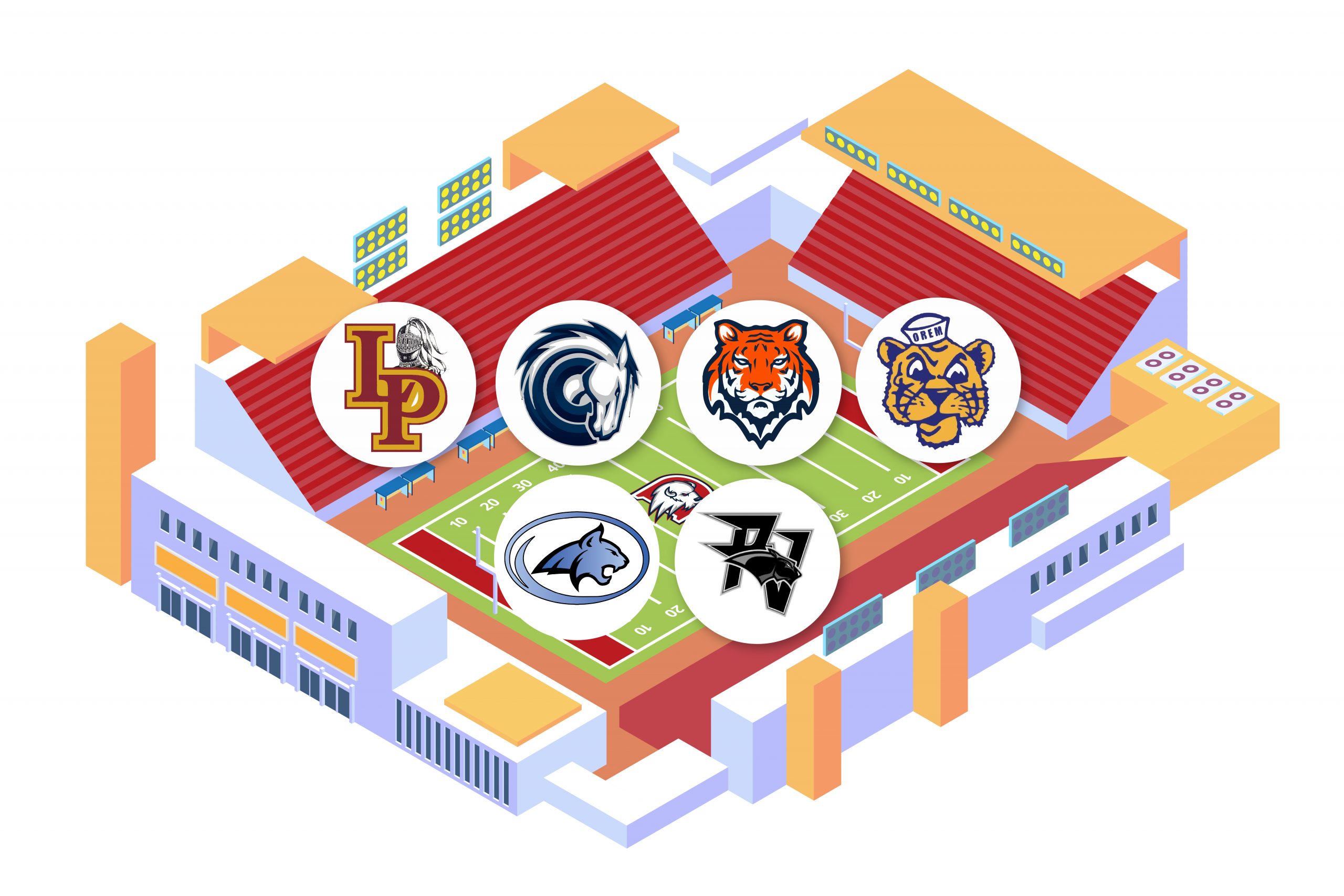 DSU will be hosting the Utah High School Football State Championships on Nov. 21. The 4A, 5A and 6A divisions will be attending the championship games. Graphic by Emily Wight.

Greater Zion Stadium will host the Utah High School Football State Championships for the 4A, 5A, and 6A divisions.

The championship games are set to take place Nov. 21 starting with the 4A division game kicking off at 12:30 p.m. with the next two games following.

Previously, the championship games have been played at the University of Utah campus at Rice-Eccles Stadium in Salt Lake City, but due to the pandemic and St. George being less populated than Salt Lake City, the games are being moved to Dixie State University.

“Because of both stadium construction and the PAC-12 conference, [The University of Utah is] not allowing outside events to take place at their playing facilities,” said Jon Oglesby, assistant director of the UHSAA.

As the UHSAA looked for a new venue to host the championship games, DSU seemed like a great fit.

“[DSU] was enthusiastic about trying to find solutions to various issues that are related to student and spectator safety, and we’ve been able to find those at Dixie State for this year,” Oglesby said.

Greater Zion Stadium recently went through a major reconstruction adding in the east grandstand, along with a brand new video score board.

“The expansion of the eastside grandstand of Greater Zion Stadium allowed us to begin conversations of the UHSAA regarding high school playoffs several years ago, and we hope to sponsor many more in the future,” said Jordon Sharp, vice president of University Marketing and Communication.

Along with the luxuries of the east grandstand and jumbotron, Greater Zion Stadium also allows for a safer environment for both players and spectators. As confirmed COVID-19 cases start to rise in Utah, the additional seating allows for the assurance of safety.

“The principals on our executive committee who make decisions to find state championship venues were interested in finding a college site to allow for adequate social distancing and allow for students to still get experience in a college venue,” Oglesby said.

DSU has been on top of its game as it prepares to host the championship games.

“The event coordinators have been coordinating with the local health department and the DSU COVID-19 response team to follow best practices for large gatherings,” Sharp said.

As DSU prepares to host the event, local high schools are also excited for the event to be moved to a closer location than Salt Lake City.

With the abundance of southern Utah fans attending the games, concessions, entrance fees and parking will bring in income for the university.

“All revenues brought in through the event will be used to cover the university’s costs for hosting the competition,” Sharp said. “However, it is a great opportunity to bring people from all across the state to our campus, and we hope they will experience the growth and excitement at DSU.”

Keep up with the UHSAA football playoffs on its website to find out which teams will be playing for the championship.