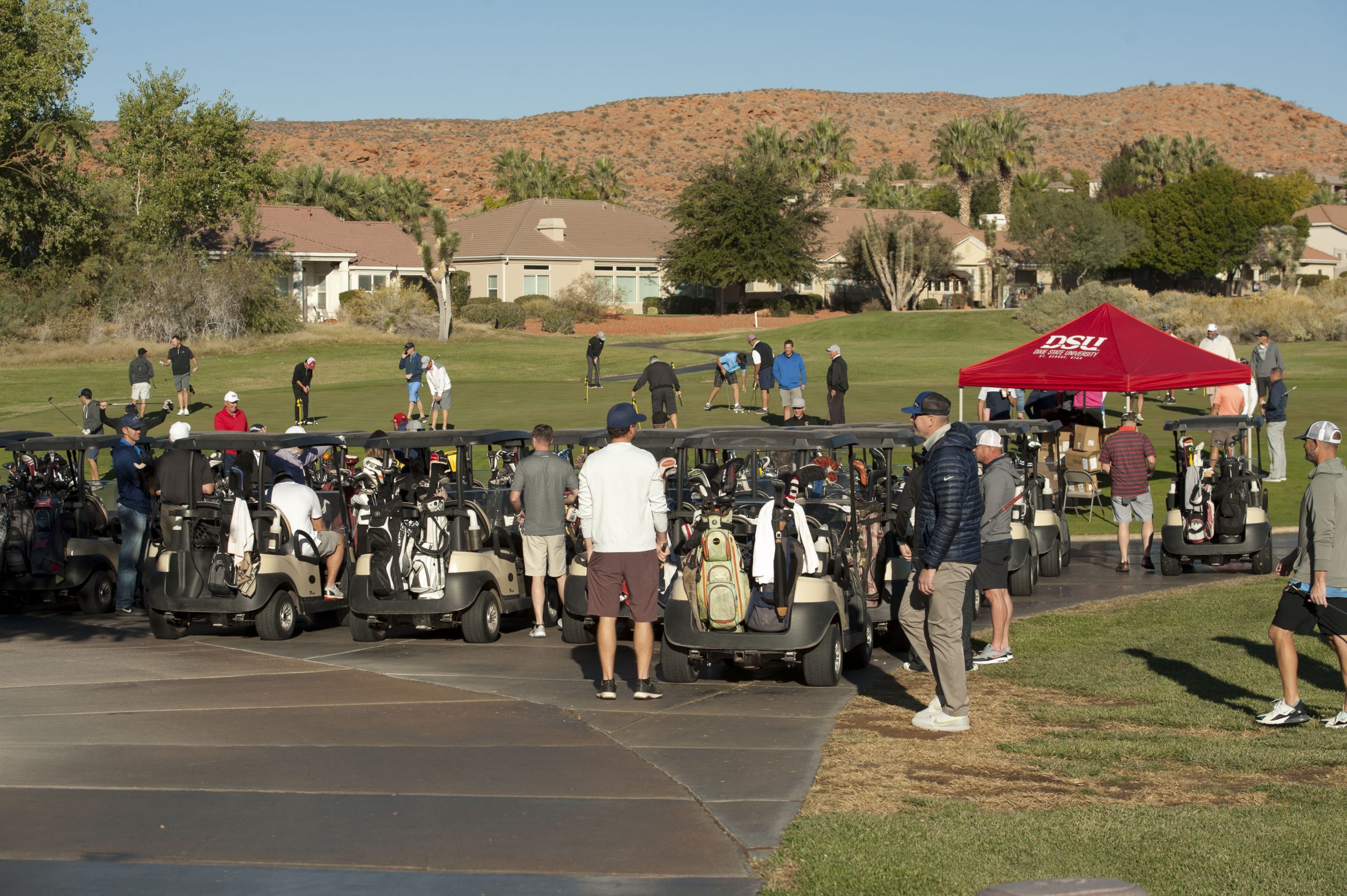 The DSU basketball program hosts a fundraiser for support of the upcoming season on Oct. 30 at the Green Springs Golf Course. The Trailblazer sports come up with creative ways to stay COVID-friendly when hosting fundraisers. Photo by Tianna Major

Dixie State University Athletics is on the verge of making its return to play in the coming months, but the damage is done to the Trailblazers’ budget.

The COVID-19 pandemic has prevented DSU Athletics’ opportunities to host fundraisers and camps, preventing money from being raised for the sports programs.

For example, volleyball hosts camps where it invites teams from Utah and all over the West Coast to compete. Since the NCAA implemented restrictions on recruiting, it limits the types of camps DSU can offer, which then limits the amount of money the team can raise.

“For the athletic department, COVID-19 has been brutal just because [of] the testing factor,” volleyball head coach Robyn Felder said. “We’re having to get tested once we head into our season, which in a month it’s going to be basketball’s, volleyball, soccer’s — everybody is going to be rolling. We all have to test three times a week, so just the testing alone is just putting a huge financial strain on the athletic department as a whole.”

Another fundraiser that has been impacted was the premiere event of the football team’s movie “The Rise.” The film was set to hit theaters on Nov. 7 at the Pineview Megaplex Theater, but due to the rising cases of COVID-19, the event was canceled. Now the football team is raising money a different way by selling DVD copies of its movie.

DSU Athletics makes sure the Athletic Student Fee is divided up to help fund the operational budgets of DSU’s 15 NCAA teams. Operational budgets include items like team travel and equipment. The fee does not cover budget items such as scholarships or coaching staff salaries, but it does support scholarships for the cheer and dance teams, the mascot, and advertising initiatives to promote athletic event attendance.

Athletic Director Jason Boothe said the expenses the fees help cover exceed the amount the athletic department has available to spend to cover the Athletic Student Fee’s areas, therefore increasing the need for additional fundraising. He said the athletic department is able to provide most of the funding each team needs to function. Each individual team has set various fundraising goals to help their programs obtain additional items each coach feels he or she needs for the team.

Boothe said: “The additional fundraising activities we do to fund the department, which helps set the teams budgets, are critical to our success.  We don’t have a lot of money in the athletic department, so we have to make every dollar count, especially during the transition. Every fundraiser we do goes to help our student-athletes. Each one is critical.”

The Trailblazer sports programs thinks creatively to stay COVID-friendly when they host fundraisers. For example, the volleyball team made a video to promote its website to help donate to the program.

“[We’re trying] to get support from friends and family and anybody who follows us and our team,” Felder said.