‘There’s not really a weakness to her’: How Keslee Stevenson is the ultimate teammate 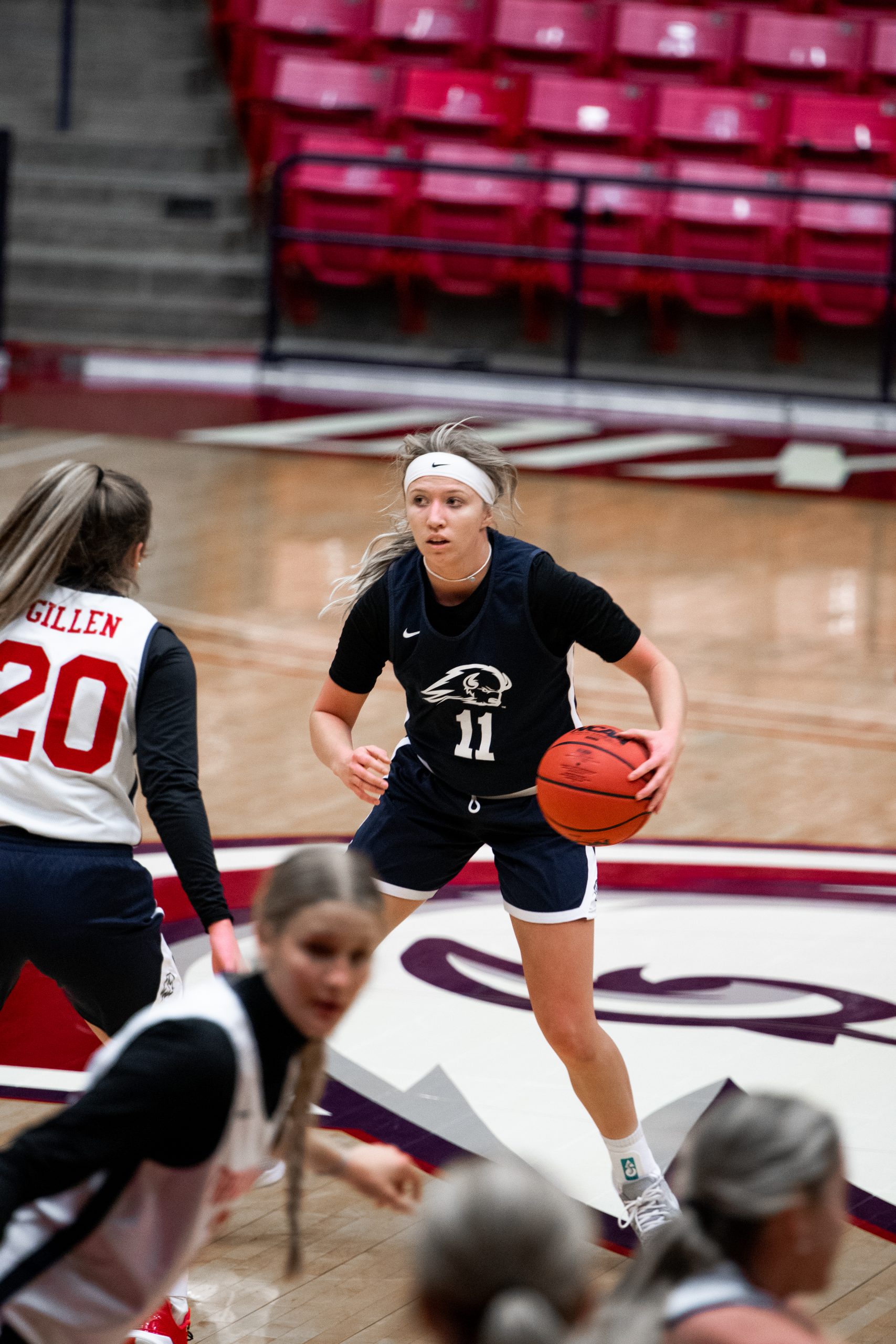 Keslee Stevenson, a senior exercise science major from Willard, practices for the upcoming season with her fellow teammates. Stevenson is a cornerstone for the team for being dedicated to her team, making tremendous improvement, showing exceptional leadership skills, and being named to the RMAC Academic Honor Roll. Photo by Breanna Biorato.

At Dixie State University, only one member of the women’s basketball team has played four seasons of basketball. She was a member of five-year head coach JD Gustin’s first-ever recruitment class, averaged 31 minutes and 9.1 points per game her junior year, and is one of the team’s captains this season.

Keslee Stevenson, a senior exercise science major from Willard, is a cornerstone of the women’s basketball team. Gustin said he has nothing but praises for his star guard. She is known to be dedicated to her team and the ultimate teammate.

“[Stevenson’s recruitment] class was a real challenge for us,” Gustin said. “For her to stick through all the adversity, it’s really made her grow. She’s a foundation piece to this program for as long as we’re here.”

Stevenson took a chance on coming to the DSU women’s basketball program because as a star in high school, DSU was a risk for Stevenson due to the program going through a transitional period. Gustin said he recognizes that looking back, but is grateful she chose DSU.

“Our program was average,” Gustin said. “She took a chance on us.”

Stevenson opted to come to DSU because it was in close proximity to her hometown in northern Utah, but appreciated she was still far enough away to be independent.

Stevenson said while it was hard at first moving down to DSU as a freshman, “my coaching staff and my teammates helped me to push through and without them I wouldn’t have been able to [stay all four years].”

Although Stevenson credits Gustin with helping her grow, Gustin also sees Stevenson’s growth both on and off the court from when she was recruited.

Not only has her game developed on the court, but Stevenson is also outstanding academically and a leader on the team. Not only was Stevenson named to the RMAC Academic Honor Roll, but she is also a Student-Athlete Advisory Committee (SAAC) representative for the women’s basketball team and one of the basketball team’s captains this season.

Gustin said, “There’s not really a weakness to her in any part of her life.”

Stevenson’s teammates have similar thoughts. Breana Moea’i, a senior communication studies major from St. George, shared a story of a time when Stevenson did a conditioning drill alongside her to help Moea’i believe that she could finish it and be that little extra push she needed.

“She’s a really strong leader for us,” Moea’i said. “She leads by example and by what she says to us. Her standards are pretty high, so for us to see that, we want to meet her rather than stay on our level.”

Being a good teammate is the most important thing to Stevenson. She knows that no day is guaranteed anymore with COVID-19 and there’s always a possibility of the season being canceled at a moment’s notice, so she does what she can to support her teammates.

“My biggest thing is if people enjoy playing with you, if you’re a good teammate,” Stevenson said. “They’re all like my sisters, so being that big sister for them is important to me and helping them get through their struggles and things I also went through in the past.”

As the women’s basketball team prepares for its season to start, the teammates are excited about the chemistry and family bond they have developed. Stevenson and her team are ready to compete and are confident they can make a splash in the Western Athletic Conference this season.

“We’re going to show everyone what we have to offer,” Stevenson said. “[We’re] all working our hardest day in, day out and not taking anything for granted. We’re ready.”