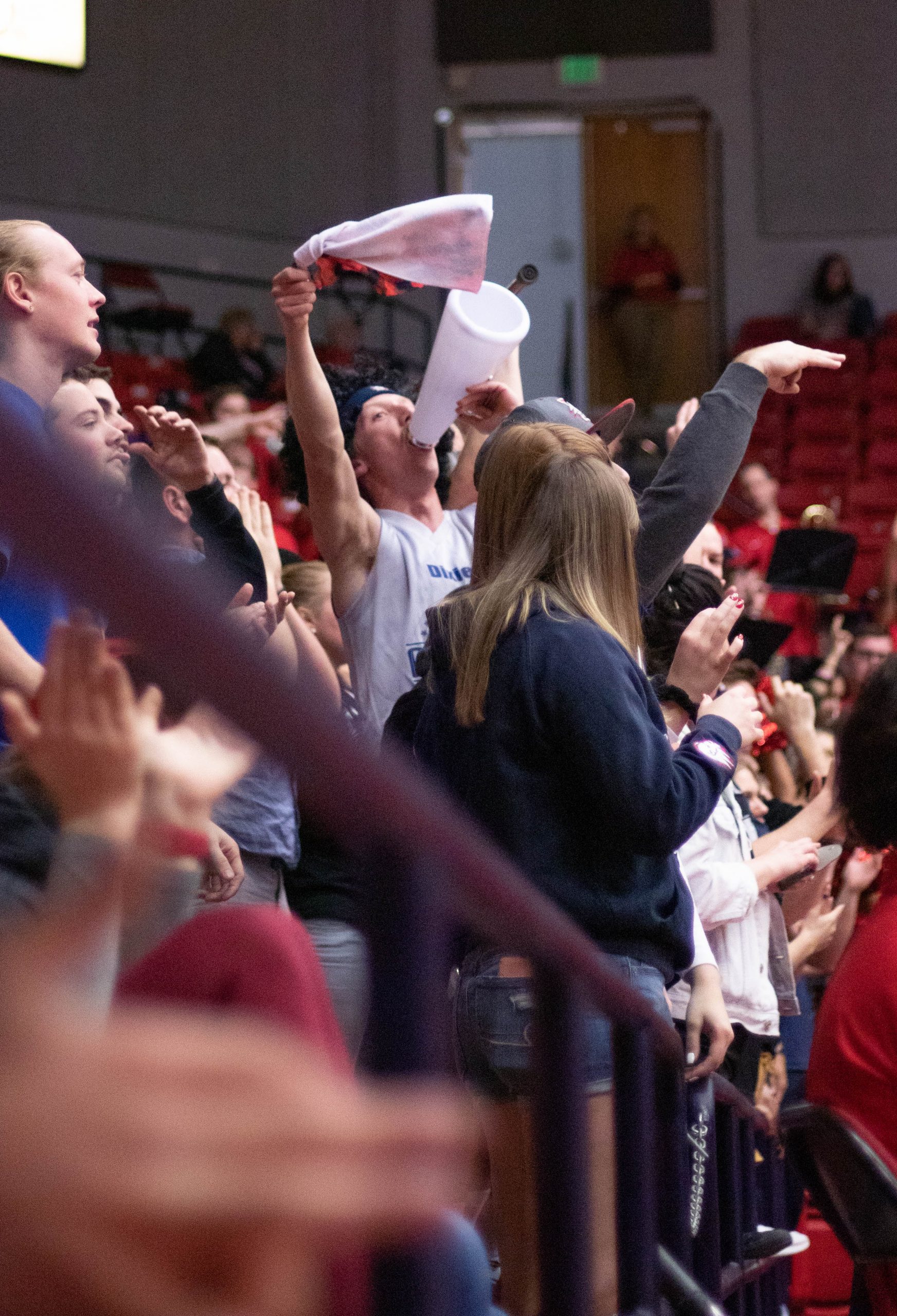 Dixie State University students cheer on the men’s basketball team at the semifinals in March 2020 before the season was cut short due to COVID-19. Megan Webb says at least students and family members should be allowed back in the stands when the basketball and swim seasons return. Photo by Breanna Biorato.

With Dixie State University’s basketball and swimming seasons gearing up to debut in about a month, sooner or later, a decision will have to be made about allowing fans in stadiums to watch the games.

By no means should the stands be filled to max capacity, and COVID-19 safety protocols should still be followed, but a limited number of home fans should be allowed in stadiums for the benefit of the teams competing.

With fans being allowed at Major League Soccer, National Women’s Soccer League, some NFL and high school sports games, they should be allowed at some level in college athletics this winter.

High school sports surrounding the St. George area have played with their stadiums at near max capacity since football season began, and very few issues seem to have risen as nearly the whole season has played out now.

Although the sports that have been playing so far are outdoor sports, while basketball and swim are indoor sports, the opportunity for fans should not be taken away from them.

The standard capacity of fans for most sports teams that have returned has been 25% or less of their stadium capacity. At the M. Anthony Burns Arena, this would be 1,250 people. DSU’s men’s basketball had the best attendance in that stadium last season, averaging 2,432 fans per game during normal times.

Having been in the M. Anthony Burns Arena during those games, 50% capacity may be a bit much to properly social distance; however, looking somewhere in the 25% or lower stadium capacity with masks, assigned seating, temperature checks, and maybe even delegated entrances, which some sports teams have done, could be the balance between allowing fans in and still ensuring safety.

Typically, members of the St. George community come to games, but to keep the campus as closed as possible, an alternative could be just allowing students and family members to attend, which would likely lower attendance.

This way the student-athletes are only in stadiums with people they could’ve crossed paths with on campus and their families.

Safety should be the priority, but also recognizing the value of having fans in attendance at sporting events and the different atmosphere that brings.

Teams feed off the energy of the fans they are competing in front of, and despite the best efforts of fake crowd noise or fake cut-outs of fans that some professional teams have done, nothing beats the real thing. Fans create an atmosphere that enhances competition levels.

Allowing fans to watch games is important, and doing so with diligent safety regulations is possible. Teams have been bringing fans back into stadiums since the return of professional sports around the country.

Especially as DSU makes the jump to Division I athletics, it would be even more difficult for the Trailblazers without the support of their peers and families behind them.