How to discern between fake, real news on social media 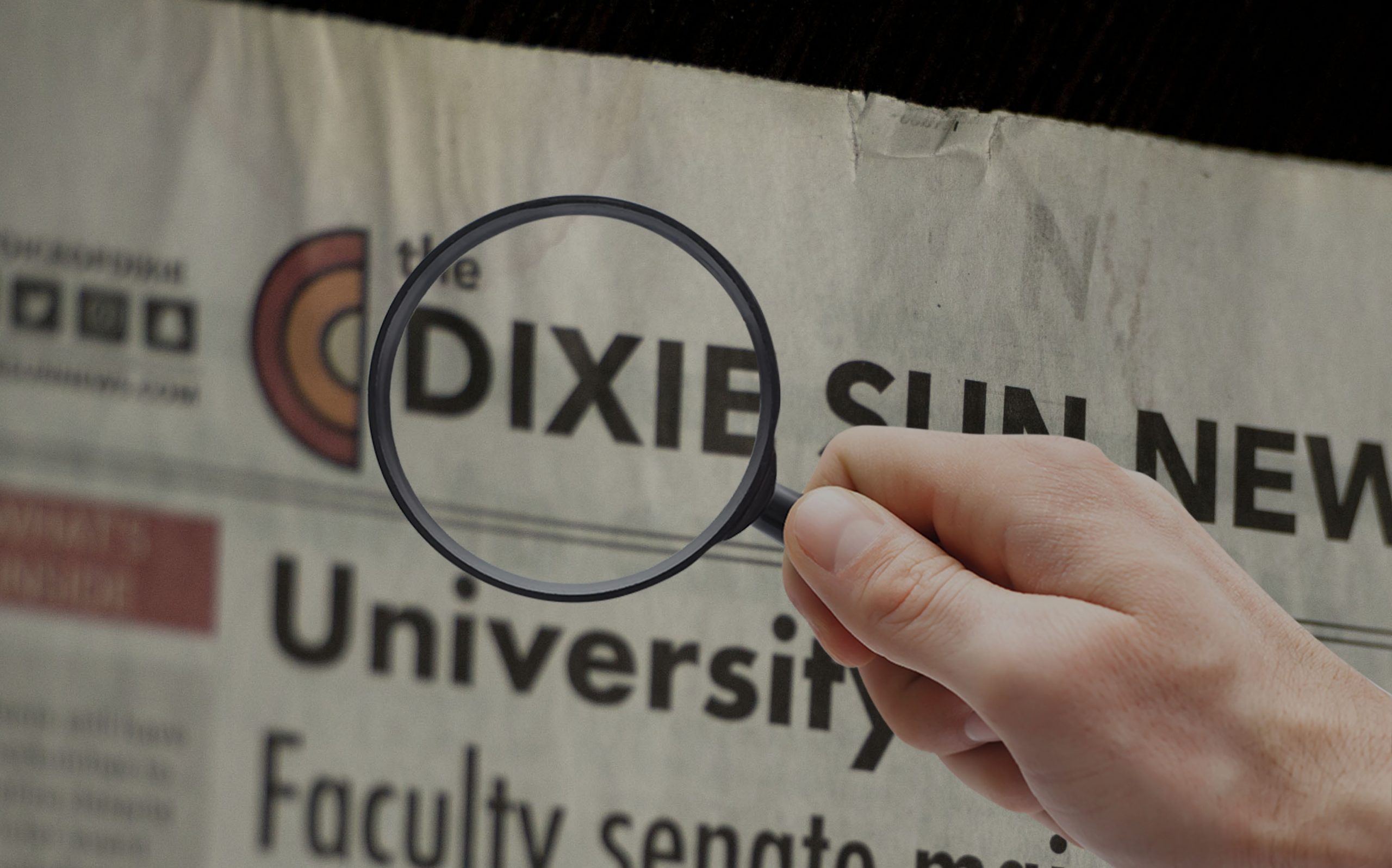 Fake News is a big issue in today’s world, and people need to know how to spot it. There are guidelines to becoming better at spotting whether something is real news or fake news. Photo by Tianna Major.

The continuous battle to recognize the truth within the media has become especially tricky on social media platforms. How can we tell if a news story is completely made-up if it has the support of thousands of people liking and retweeting it onto our timelines?

With Election Day right around the corner, it is essential that we avoid being easily deceived by these fictitious stories, carefully curated to sway our thoughts.

Dixie State University students can discern between real and fake news on social media by following these guidelines:

Be skeptical of what you read online

You’ve heard it before: Refrain from believing everything you read online is true.

Nathan Snow, assistant professor of media studies, said: “Very very rarely would I trust any news story that pops up in my feed, knowing that the only reason it’s there is not to present a fair and unbiased view of the news; it’s there to get me to click on it.”

Snow said fake news finds a way onto your feed because it is tailored for you specifically based on the algorithms social media uses to keep you engaged. The sensational headlines on your feed are not to inform and educate you, but are simply clickbait.

“These algorithms will target you specifically with things that it thinks you will engage with,” Snow said. “It uses your browsing history, it uses the history on that website, it uses all sorts of different tools to tailor fake news for you. It’s designed to attract your attention.”

Similarly, professor of communication Randal Chase said it is essential that students do not read a news story on social media and automatically believe it.

“People today believe that if it’s on their cellphone, then it has to be true,” Chase said. “It’s absolutely required that you be skeptical about every single thing you read from every single source and check it out.”

Dave Harris, assistant professor of media studies, said students should initially identify and research the source on news stories they read online because anyone can post their opinion as an authentic headline.

“We know that anyone can start a Facebook page, and can start posting ‘news’ as if it were real,” Harris said. “We need to really get some media literacy. We need to say ‘what about this makes it look real or makes it look fake?’”

Harris said the biggest thing to look for when examining a source is if it is a well-known or official news source. Students should also look at if the source is a blog as opposed to an official website, and if the source is heavily subjective and one-sided.

Snow said: “I would highly recommend that you make sure your source is not just coming from your side of the conversation because then they are most likely reporting polarized, fake news. Look into who they are and their website.”

Do your own research and fact-checking

It’s as simple as one Google search, Snow said.

“Take the time, do that one extra Google search,” Snow said. “It’s unrealistic to assume that everybody in the world is going to be a journalist; we just don’t have the time. We still need to find the time to do one extra search about anything you find online.”

Snow said not only will this research help you identify whether or not news is real or fake, but it will prevent anymore AI algorithms from inserting certain fake news stories into your social media feed.

Chase said: “If you want to be an informed citizen, then it is essential to do your own research about a news story yourself. If you remain clueless and don’t take it upon yourself to fact-check, then you will be easily swayed by people who do not have your best interest.”

Students must be proactive in combatting fake news by doing their research and informing everyone around them about the truths they found, Chase said.

Harris said: “It’s really easy to just do quick checks instead of instantly believing everything we read. And once we do, it’s important that we stop these rumors from spreading, even if it’s just posting a quick response saying, ‘Hey, I just checked this out, here’s the website, it’s not true.’”

Read about the same story from multiple sources

It is so important that students get multiple perspectives of the same news story to identify what is real and fake, Harris said.

“I would highly recommend, to combat fake news, that you make sure you’re getting multiple perspectives to the story,” Snow said. “If you get a majority of your news from CNN, try to read about the same story from Fox — the complete polar opposite — because the truth is somewhere in the middle.”

By researching and reading the same story from multiple sources, you can become a more balanced person and have more awareness for what is real or fake, Snow said.

“If there’s only one website that’s reporting some specific story and you don’t hear about it anywhere else, then it’s suspect,” Harris said. “In today’s world, all the news agencies are looking at all the other news agencies, so when one breaks a story, it’s not long until all the other sites catch up.”

Ask yourself, “Does this sound believable?”

Having critical thinking skills and self-awareness is a way students can combat fake news, Harris said. Start by asking yourself after reading a story if it sounds believable and accurate.

“It can be difficult because even professional news websites, like Fox, CNN or even MSNBC can be subjective,” Harris said. “So, it’s essential that we not only carefully recognize the source of our news, but use critical thinking skills to examine what they’re saying.”

Evaluating stories ourselves through critical thinking skills can prevent us from being easily fooled when reading a post online, and it’s through the questions we ask ourselves that we can really understand if a story is fair and balanced.

“Know that there are people out there that are trying to fool you, especially you young people,” Harris said. “Once you’ve acknowledged this, you can carefully think, ask yourself if a story sounds believable, and discern whether or not it is real or fake.”