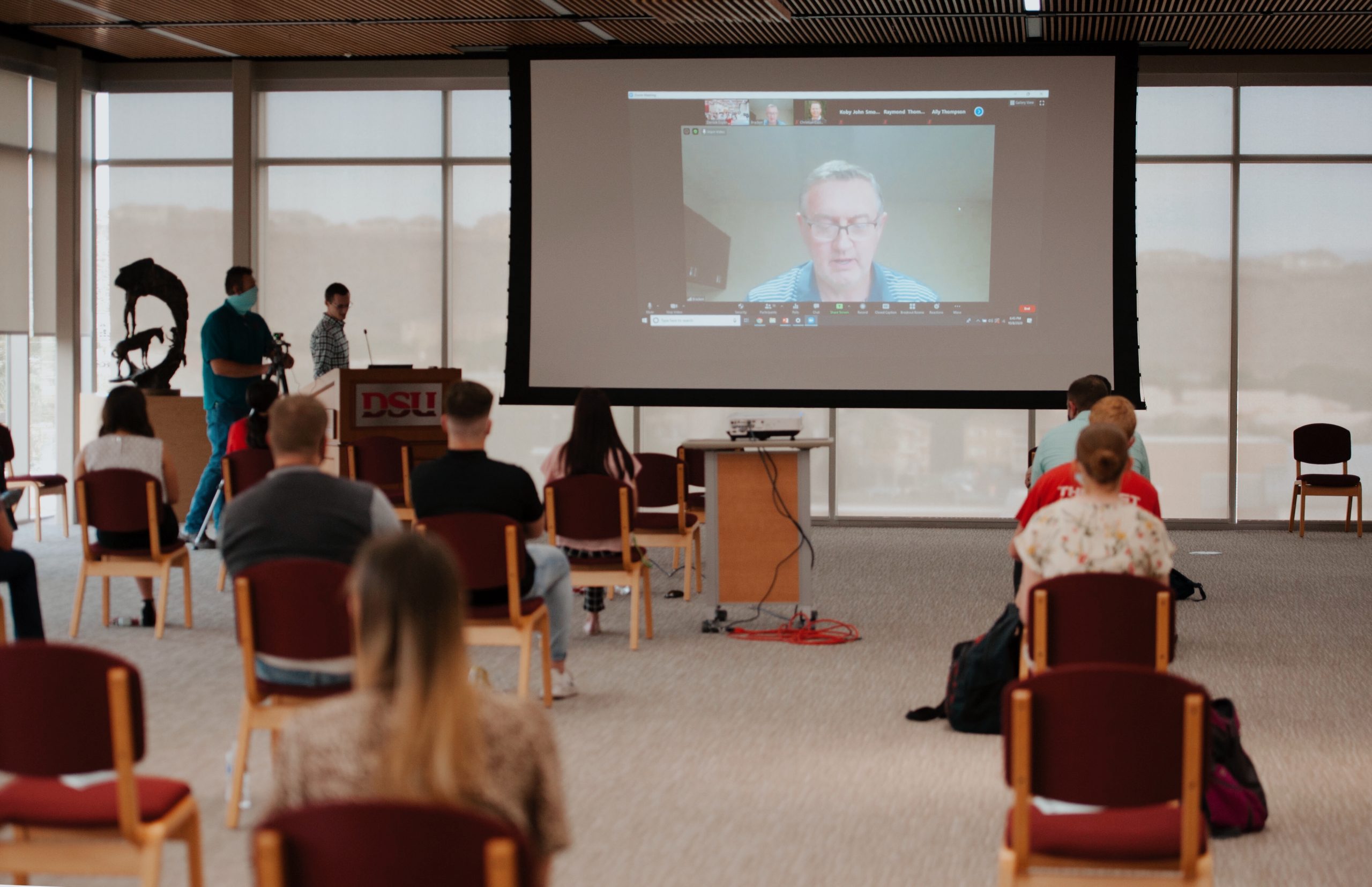 Mark Peterson, market leader of Altabank, speaks at the accounting and finance speaker series for Career Week on Oct. 8 to give real world knowledge and advice to students. Career Services hosts events like Career Week to help students on their path to careers. Photo by Tianna Major.

Students have access to a resource on campus that will help them get a jumpstart on their career and show the importance of gaining experience in college.

Ali Threet, executive director of Career Services and Student Success, said the individuals at career services want students to not only find a job after college, but find a job they would like to have.

“It’s going to take a lot of effort, you can’t just have a degree anymore and think that’s going to cut it,” she said. “So you have to get the degree and the experience, and you can get them simultaneously while you’re here at school.”

Threet said the individuals at Career Services help students with networking, figuring out what they want to do, job shadowing, internships and gaining the experience they need. They host presentations with student speakers who have had successful internships so the underclassmen can see what they can achieve.

“It is possible, but [you] have to start trying now,” Threet said.

Kathryn Sanders, a junior biomedical science major from Hurricane, had the opportunity to intern at NASA her sophomore year of college as the only biologist on the NASA campus.

She said a big aspect of the internship was learning experience, and she had to remember that no one was expecting her to be perfect or know what she was doing right off the bat, so she shouldn’t be afraid to accept what she didn’t know and learn it from her mentors and peers.

“I learned so much on the job,” Sanders said. “When you get there, you think you have the skills, but almost everything I was learning I was learning from my peers or trying to learn myself. You think you learn these concepts, but when you put them into practice, it’s a lot different than a school assignment.”

Sanders said she learned things that she can apply to her current schooling and bring that knowledge to her future jobs, and she said she would like to do anything biology-related.

“This experience at NASA has also helped me get other experiences, jobs [and] internships that have also helped me along the way,” Sanders said. “It was just [one] open door that has opened many doors.”

She got a second internship working at the Soft Cell laboratories on campus and got a job as the biology and physical science senator on campus.

Threet said, “It all goes back to getting experience and networking in addition to the degree.”

“There is only so much time that we spend in college,” Sanders said. “Internships, research projects that you do with your professors, or even volunteer work you do at your college … are experiences that [you] can take with [you] after college, and it’s hard to get that experience after you graduate and before you have a job.”

Denali Lathrop, a senior English major from North Pole, Alaska, has had the opportunity to expand her knowledge among internships with the Southern Quill, DSU’S literary and arts journal, and the DSU Library and Learning Services newsletter, along with being an intern as a medical receptionist.

As a work study student, she was able to show her ambition and passion for learning, so when positions like the managing editor for the Southern Quill or a job as the circulation supervisor opened up, her mentors in Library and Learning Services knew she would be a good fit and offered her the job.

“Networking is so important,” Lathrop said. “With every single one of these internships, I got [them] because of networking, because I knew people and made the decision to reach out and ask [about the opportunities].”

Threet said while the pandemic has made things more difficult, like the cancellation of internships near the beginning of the pandemic or companies going on a hiring freeze, the positive outcome is realizing the ability to reach out to everyone nationally and globally through electronic means, Threet said. While this was available before, it has become more mainstream now.

Businesses and organizations are also now offering more virtual internship opportunities, which was not common at DSU before. It allows students to have more opportunities outside of St. George while still living here.

The hindrance of virtual internships is that interns have less of an opportunity now to understand the company culture and network with everyone else in the company.

At a traditional in-person internship, Threet said interns are not only immersed in the company working with their supervisor, but also networking with others in the company and getting an overall sense of the company’s culture, but the virtual aspect neglects that opportunity.

Threet said the new strategic plan is centered around being polytechnic, which means career ready.

“I would imagine in the next 5 years that internships and a campus culture of career readiness will become a bigger and bigger thing,” Threet said. “Students should get that mindset ready because that’s the direction our campus is taking.”