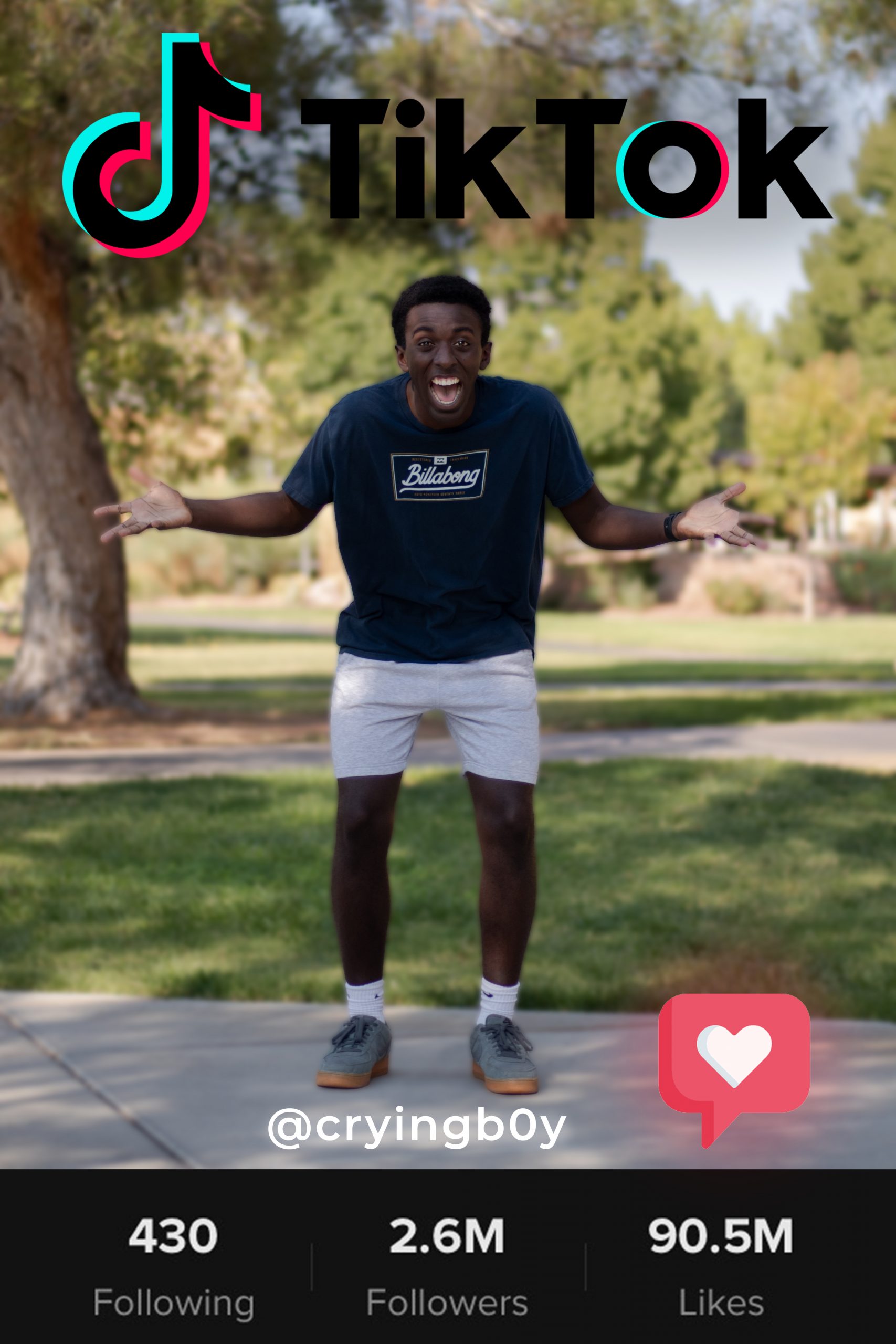 Nash Krutsch, a sophomore communication studies major from Kaysville, is known for his outgoing and witty TikToks. He has over 2 million followers and gets paid partnerships from the app. Photo illustration by Breanna Biorato.

Imagine scrolling through your “For You Page” on TikTok when you suddenly come across a viral video of your classmate throwing it back and hitting the “Renegade.” How can this social media superstar be the same guy you just collaborated with on a group project?

Two point six million followers know him as “@Cryingb0y,” the energetic TikToker that ends almost every one of his comedic videos with his iconic scream. To students at Dixie State University, he is Nash Krutsch, a sophomore communication studies major from Kaysville.

“It was last year, my freshman year, in the fall [and] I was bored just on TikTok all the time, so I just started making them in my college dorm for fun,” Krutsch said. “I really wasn’t thinking anything of it. I was always hoping my TikToks would go viral, but never thought it would come to this point.”

Krutsch said the first video that went viral on his page was his tutorial of the “Renegade” dance challenge, which was shot in the middle of his dorm room. The popular dance challenge was a trend on the app, and typically each person who participated in it used the same background music in their videos while showing off a routine of dance moves.

Krutsch stood out from the 31.5 million other “#Renegade” TikToks because instead of using the usual background music, he sang the song himself and added his own unique flair that made the tutorial easy and funny to watch. Not only did this bring in 6.5 Million views, but 22.3 thousand new videos were created using his audio instead of the original song.

“People were like, ‘Oh, you’re so funny!’ or commenting the sound effects I was making in the video, like the ‘Bing, bang, boom, bong!’” Krutsch said. “I was like, OK, I see they enjoy when I make funny sound effects and stuff, so I’m going to keep doing that.”

Nicole Graff, a sophomore radiography major from Mesa, Arizona, has been a close friend of Krutsch even before his TikTok career began to take off. She said she has seen the passion and love he has for creating content that will make others smile.

Graff said: “I remember last year, before he was famous, he was making TikToks all day every day, and then one day he blew up. I’ve never seen someone so stoked. He is so kind and humble. Though his following changed, he hasn’t and I love that.”

Krutsch said after his first video went viral, he continued to gain more exposure, viewers and followers, which eventually led him to getting sponsorships and hiring a manager to oversee all of his emails and inquiries about collaborations with other TikTokers and brand deals.

Krutsch is currently partnering with certain companies and even endorses them in some of his TikToks, where he explains the benefits of subscribing to their programs while dancing in the red rocks of St. George.

“[My sponsorship has] been a really amazing opportunity for me to pay for schooling, my education, extra activities I like to do like travel and even my promo video,” Krutsch said. “It’s helped me make better connections and network with other people too.”

As Krutsch gained more followers and attention on TikTok, he said he wanted to use his loud, vibrant personality and constant screaming to be something he focused on when making original content. His more recent videos are collaborations with other well-known TikTokers from Utah.

Braden Peterson, more commonly known as “@braden.peterson” on Tiktok, is a former DSU student who has 30.6 thousand followers on the app. He and Krutsch made a TikTok together of another popular dance challenge in a secluded spot at Dixie Rock, which gained 164,700 likes.

The two became friends after chatting a few times during the fall 2019 semester about how much they enjoy making TikToks.

“I was down in St. George one weekend and we thought it’d be super fun to collab,” Peterson said. “Nash had the most energetic personality and always has everyone laughing. I remember getting to Dixie Rock and right when Nash got out of the car, I couldn’t help but turn to my other friend and say, ‘What a fun person to be around!’”

Krutsch continues to make videos everyday as a Tiktok star, but he has to remember to balance his everyday life as a DSU student at the same time. Not only is he learning new dance routines and brainstorming new video ideas, but he also adds doing homework and going to class to his to-do list.

“One-half of me is like, ‘I want to continue to create content every day and school can wait,’ but I want to really finish school before I make TikTok my only focus,” Krutsch said. “So, it’s a fun thing to do while in school, and maybe when I graduate I can decide if I really want to keep doing this and take it to the next level.”

If Krutsch continues to grow in popularity, he has the opportunity to be verified one day. According to a TikTok Newsroom article, “TikTok’s verified badge is an easy way for notable figures to let users know they’re seeing authentic content, and it helps to build trust among high profile accounts and their followers. For celebrities, non-profits, or official brand pages, this badge builds an important layer of clarity with the TikTok community.”

Krutsch said students at DSU should download the TikTok app and follow him or watch his videos if they are ever feeling down and need a laugh. He also encourages students to make their own content because it is a great way for others to see their talents.

“It’s just a great app, you can literally do whatever and share your talents,” Krutsch said. “You can do art, you can cook, whatever you like to do. There’s literally a category for everything you enjoy doing or watching.”

Not only will TikTok allow you to show off all your skills, it also allows you to grow confident and be more comfortable in your own skin, Krutsch said.

“I used to hate listening to myself on videos, and now it’s like all I do and thousands of other people listen to me screaming and being crazy every day,” Krutsch said. “It’s really helped build my confidence knowing that other people out there enjoy me and I’m not the only person who thinks I’m funny.”

Krutsch said he is so lucky to have millions of followers who support him and help keep his page an inviting, upbeat and friendly environment. He is currently working on a major project with the help of his manager that he is excited to announce in the near future.

“I want to make sure I keep good morals on the app and not get involved in any kind of drama or anything like that,” Krutsch said. “I just want people to come to my account knowing it’s a safe, fun environment for anyone to go.”