Know your foe: DSU Volleyball prepared to step right into the WAC 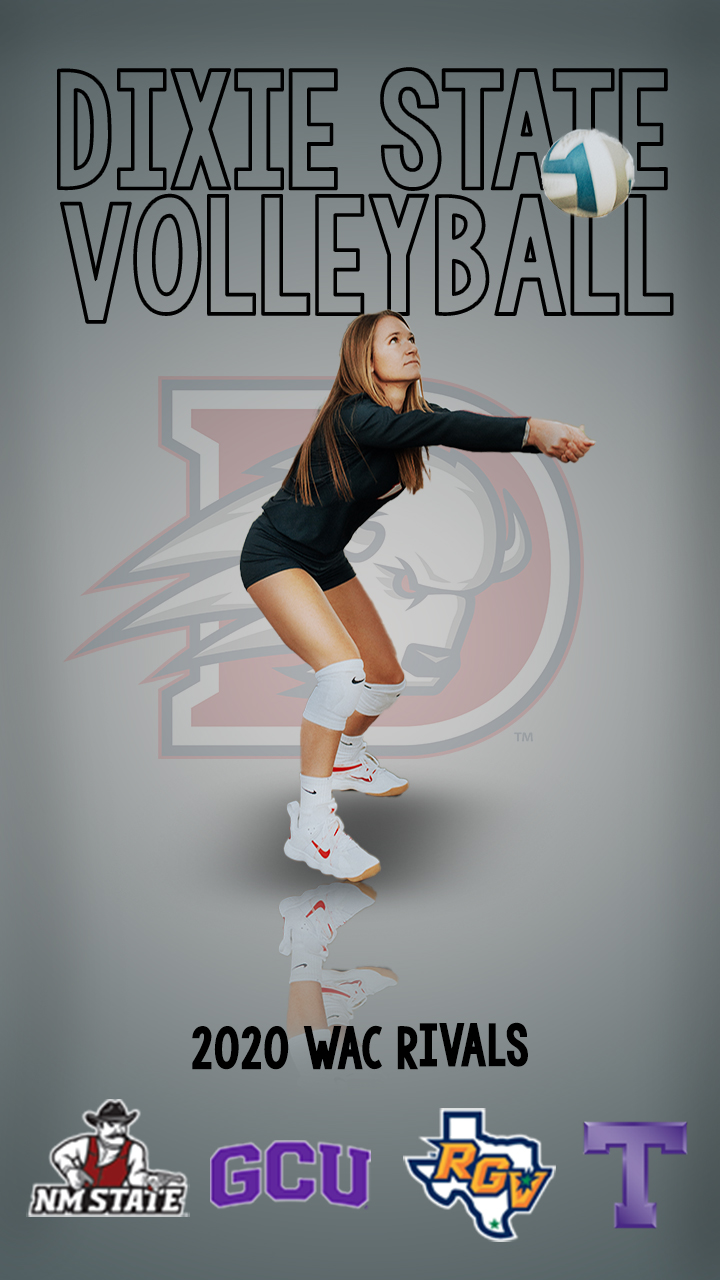 Jordyn Nelson, a senior medical laboratory science major from Phoenix, Arizona, is on the Dixie State University volleyball team. The team competed well in the RMAC and is ready to take the competition to the next level in Division I. Graphic by Breanna Biorato.

Middle blocker Miranda Ekblad, a junior business administration major from Fairfield, California, said since the team competed well in the RMAC, the players are ready to compete against top competitors and challenge themselves in a higher division.

Libero Mykenna Nelson, a sophomore recreation and sports management major from Phoenix, Arizona, said the extra time off is helping the team prepare for the competition in the WAC. She said the eagerness to get started with a season is motivating the team to compete and show DSU can give the other teams a run for their money.

Let’s get to know the other volleyball programs in the WAC.

The WAC is a perfect fit for volleyball

Volleyball head coach Robyn Felder said she’s thrilled to be in the WAC because it’s a conference her team can step right into and compete.

Felder said: “We’re not stepping into the Pac-12 or something where it would take us a good five years to develop the types of kids that would fit in to that type of program. I think it’s just a program where we can be competitive right away.”

Teams to watch out for

UTRGV can be a difficult defensive team to get points off of. The Vaqueros keep their opponents at a .206 hitting percentage, are a force to be reckoned with at the net with 241.5 blocks, and average 2.06 blocks per match.

Teams have to stay on their toes when they go head to head with the GCU Lopes; they are a good offensive and defensive team. GCU has the second highest hitting percentage with .240, keeping its opponents at a .195 hitting percentage, which is the third lowest, tallying up the third most kills with 1,485 while averaging around 13 kills per match and holding the fort down with the third most blocks with 275.5 while averaging 2.38 blocks per match.

You would need a genie to grant you a wish to take down the NMSU Aggies, who were unstoppable last season with a perfect conference record of 16-0. NMSU lead the way with a hitting percentage of .262, keeping opponents at a .122 hitting percentage, full sending daggers to the opponent with 1,470 kills while averaging nearly 14 kills per match and coming on top with 312.5 blocks while averaging 2.89 blocks a match.

If the perfect conference record didn’t give it away, the Aggies took the conference champion crown and earned a trip to the NCAA Division I tournament.

TSU is also making the move to DI; the Texans are known for success in their volleyball program. The team hasn’t had a “bad” season since 2009 where its overall record was 10-21, finishing with a 4-7 conference record. Last season, TSU finished No. 4 in its conference, being the runner-up in its conference tournament and making an NCAA DII tournament appearance. Definitely a team that can make some noise in the next division up.

Since the Texans are coming from the Lone Star Conference in DII, DSU and TSU are in the same boat. Both programs are making the jump to DI, and they are familiar with each other from their last matchup in the 2018 season.

Felder said she knows the head coach at TSU and she believes the two teams can be allies since they’re going through the same transition.

Felder said: “[Myself and TSU head coach Mary Schindler are] kind of asking each other ‘What are you doing? How are your [athletes] transitioning?’ Having another school that’s kind of in the same boat as you are is a good thing. It’s fun to have the camaraderie with coaches that right away we’re bonding, we’re talking to each other about our schedules, our plans.”

Ekblad said it’ll be great that both teams come into the WAC since they know each other and make their own statements.

“I think to know one of the teams we’re going into [the WAC with] will kind of make us feel at ease and know that we can compete at this level since we’ve played teams going into the same conference,” Ekblad said.

The teams to beat and who DSU should not underestimate

Taking down NMSU and GCU would be the best two for one deal for DSU if they want to be the team under the radar in the WAC.

Felder said her team should pay attention to the programs who stand in the two to six slots in the conference. For example, Seattle U, UVU and CBU can be down in a match and the tides can turn at any point. They can go on a run and pull away with a win. So, in order to be successful, the Trailblazers cannot underestimate those teams.

“I think those mid teams that sit in the mid of the WAC are really the teams at the end of the day we’re going to have to beat if we want to play postseason here in a couple of years,” Felder said.

Overall, the volleyball programs in the WAC can be competitive, and it can be anyone’s conference to take.