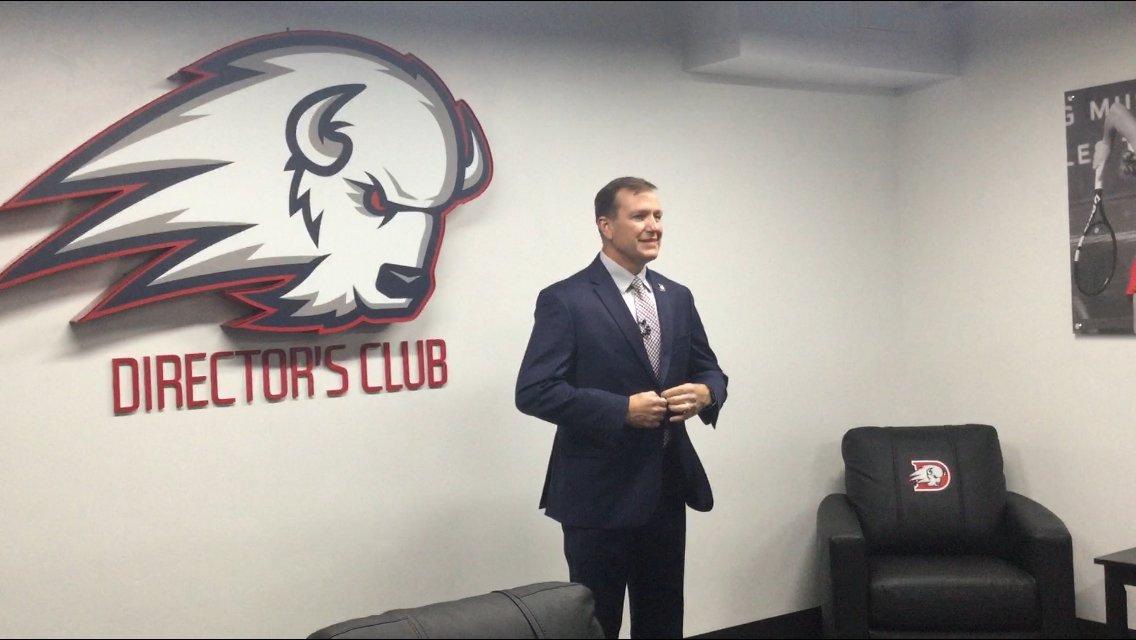 President Richard "Biff" Williams addresses the media after the State of the University Address Sept. 23 in the M. Anthony Burns Arena. Williams introduced the new strategic plan and its goals. Photo by Autumn Nuzman.

Trailblazer Distinction is also meant to make DSU more open, inclusive and polytechnic, with an emphasis on filling the regional hole in polytechnic universities, Williams said.

Williams also gave Dixie 2020: Status to Stature medallions to goal and strategy leaders from each of the six goals in DSU’s Status to Stature plan, and he presented special recognition awards to several people involved in the plan. Most were bison trophies, but the one given to Christina Durham, former chairwoman of the Board of Trustees, was a 50-pound placard for coining Status to Stature and the one given to Michael Lacourse, provost and vice president of academics, was a charging bison because he “hit the ground running” when he got here five years ago.

David Clark, chairman of the Board of Trustees, addressed rumors surrounding a potential university name change in an impromptu speech during his opening remarks.

“People … have been sharing things that are not truthful and not honest,” Clark said. “I want to set the record straight. There is no secret plan on behalf of the trustees on how to change the name of Dixie State University.”

Clark said legislators are the only ones who have the power to change the university’s name and he feels it’s disingenuous to spread the perception study DSU is doing as if that were proof there’s a secret plan backed by the trustees and university president. He said the perception study is only a survey intended to see how DSU is perceived.

“I want to set the record straight. There is no secret plan on behalf of the trustees on how to change the name of Dixie State University.”

David Clark, chairman of the Board of Trustees

“I think we all know what [Dixie] means locally: our love and affection for our heritage and what’s taking place,” Clark said. “But regionally and nationally, we need some help.”

Clark also acknowledged that the administration was unaware he planned to address the situation in his remarks until he did it.

“The university didn’t know; as he said at the beginning of those, we were not aware,” Williams said. “To be honest, I was in the back and I couldn’t really hear, and so I don’t know what those comments were.”

Lacourse and Jordon Sharp, vice president of marketing and communication, also announced a special recognition for Williams, which was a presidential portrait commissioned by the president’s cabinet from art professor Del Parson.