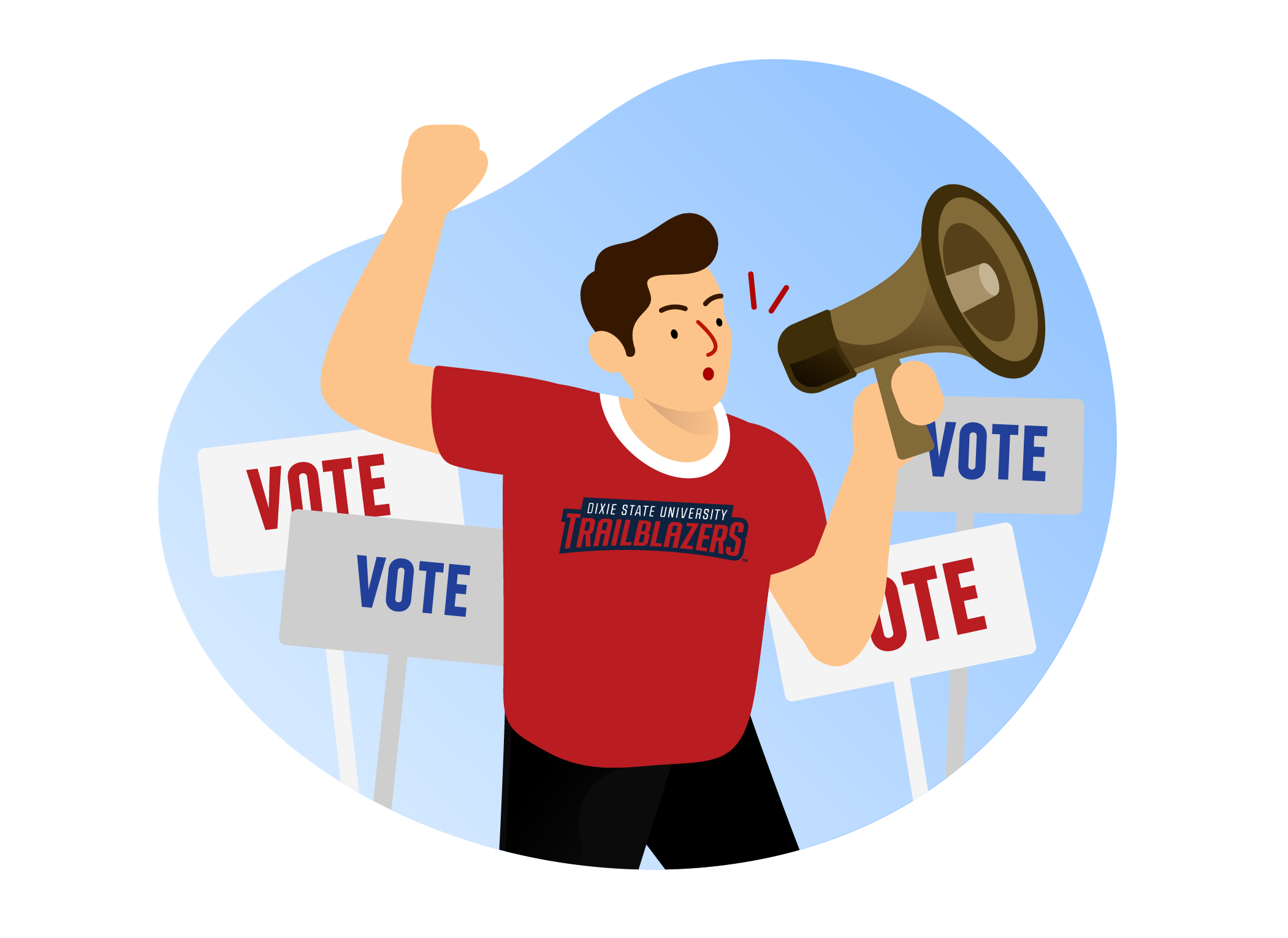 Dixie State University coaches are emphasizing the importance of voting. The Western Athletic Conference Student-Athlete Advisory Committee created a program to assist individuals through the process. Graphic by Emily Wight.

The program is non-partisan and focused mainly on the idea of getting people registered to vote in the upcoming presidential election. The program, started by the WAC Student-Athlete Advisory Committee, also aims to educate people on the importance of their civic duty to vote.

In addition to the WAC Votes program, the NCAA is encouraging teams not to practice or compete on Nov. 3 to allow team members time to go vote.

At Dixie State University, the attitude toward this new program is positive, and head coaches on campus like the idea of encouraging young people to vote.

Being active in the community is something DSU preaches to its students through the motto “active learning. active life.”

Jonny Broadhead, men’s soccer head coach, said voting is a simple thing to do and can lead to a more fulfilling life as an active member of the community.

“Voting is just a small piece,” Broadhead said. “It’s just getting more involved with everything and educating yourself. I would recommend to all the young adults, not even in sports, go spend your time doing something worthwhile.”

Broadhead also emphasized the importance of college-aged adults voting. The demographic historically worst at voting has been people ages 18-24, and Broadhead wants to encourage all DSU students to change that.

Broadhead said: “We need to get the stigma that ‘all this stuff is for old people’ out the window.”

Broadhead said while he knows better now, he wishes he had a program like this when he was in college to help him realize the importance of political participation sooner. Because of that, he wants DSU students to pay attention to what WAC Votes is trying to do.

Voting is a civic duty of everyone in the United States, but often times, talking about registering to vote leads to uncomfortable conversations, which causes many young adults to shy away from it. Football head coach Paul Peterson wants to work around this and create a space where his team can have an open dialogue about it.

“There’s a lot of talk on both sides, and a lot of the talk is negative,” Peterson said. “For me, I want to be as positive as I can and make sure we’re as respectful as we possibly can be and know that each opinion matters.”

Voting is just about voicing your opinion. Whether that’s voting in a presidential election, a local election or whatever the case may be, it’s important to let your voice be heard. That is what the WAC is trying to encourage with this new program, something Molly Rouse, women’s soccer head coach, said she is excited about.

“I think it’s important, particularly in light of everything that has happened in this last year, that we’re doing our part,” Rouse said. “Considering we have young women in [my] program, I think it’s also important for them to be participating and following through on our civic duty to make sure we’re voting as well.”

The WAC has resources available on its website to help students, athletes and fans get registered to vote simply by selecting the flag of the state they live in.