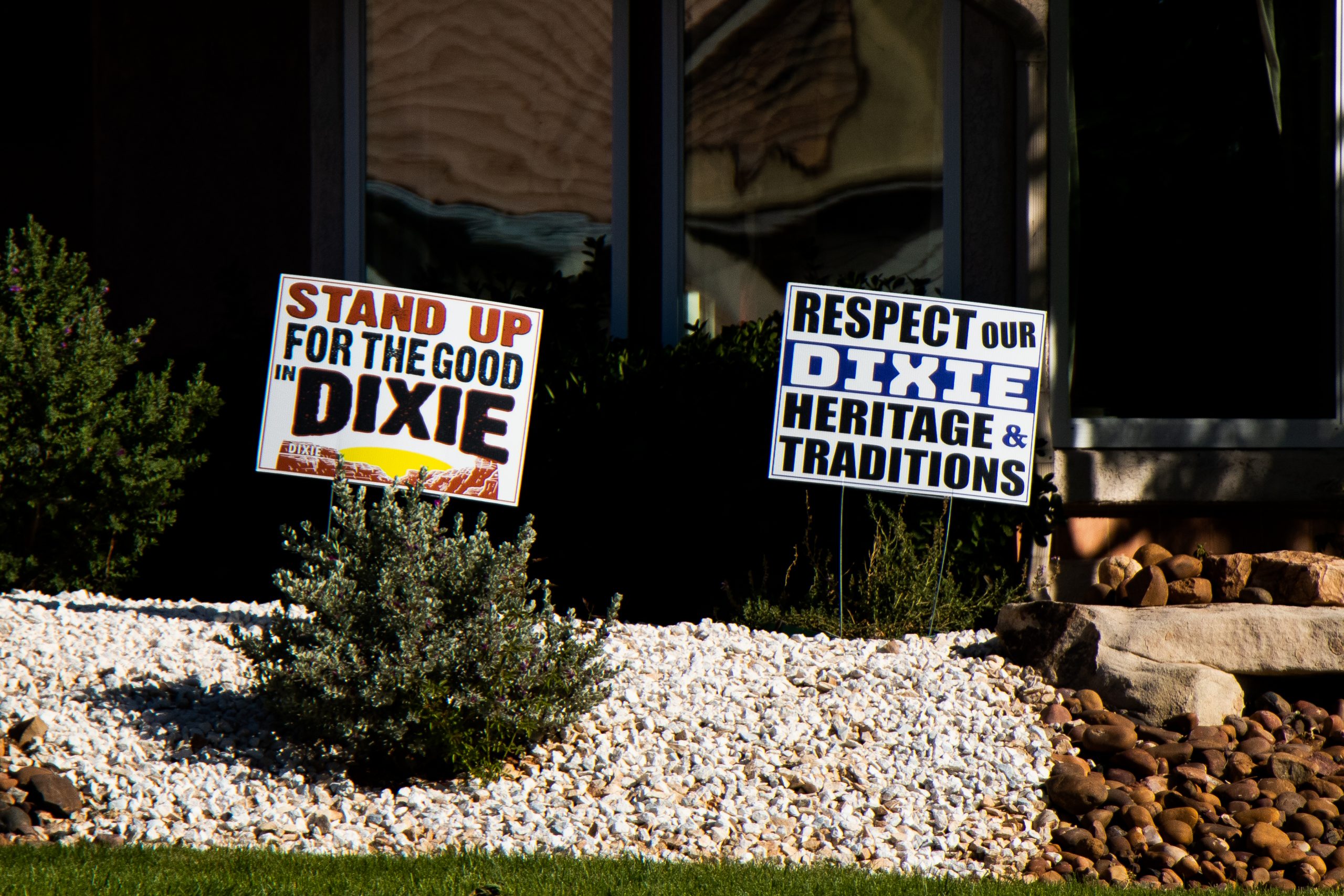 Signs express St. George residents' belief that Dixie is part of their heritage. Autumn Nuzman says it's not. Photo by Breanna Biorato.

While arguments for Dixie State University to keep its current name based on the cost of rebranding, nostalgia and good intentions are understandable, denying Dixie’s racist connotation and claiming the term as pioneer heritage is going too far.

The controversial connotation may have been unintended initially, but pretending Dixie was never controversial and doubling down on the basis of pioneer heritage is disingenuous, to say the least.

When I expressed my embarrassment over people’s denial of Dixie’s racist connotation, I was accused of being a “move in” who wants to take away the community’s pioneer heritage, and someone advised me to move away if I “hate it here so much.” I’ve lived here my whole life, I don’t hate it here, I’m descended from pioneers, and I didn’t even say I wanted anyone using Dixie to rebrand, just that the denial of where it came from was embarrassing.

Even more annoyingly, when I explained this, the other person ignored all my other points and doubted that I’m actually descended from pioneers. What do you want, a copy of my family tree and the FamilySearch records that indicate which of my ancestors were pioneers?

“The longer the local community denies Dixie’s origin and the offensive nature of DSU’s Confederate symbolism on the basis of pioneer heritage, the more willfully ignorant and offensive pioneers and the community look.“

Completely regardless, unless you can whip out a record indicating you had an ancestor who participated in the Dixie Cotton Mission or the naming of “Utah’s Dixie,” Dixie isn’t part of your heritage, even if you’re descended from a pioneer.

Pioneer heritage is telling the stories of how members of the Church of Jesus Christ of Latter-day Saints trekked across the plains to find a place where they could practice their religion without persecution, as well as any heirlooms and other objects they gifted to their families and local museums.

Dixie and its controversial origins aren’t representative of any of that. The only reason Dixie is intertwined with pioneers is because it’s widely believed that Southern pioneers felt inspired by their roots after the church commissioned the cotton mission.

No matter which origin you tie it to — the most likely of which is the Mason-Dixon Line that separated slave and free states, according to “Word Myths: Debunking Linguistic Urban Legends” by David Wilton — Dixie is always intertwined with the Confederate South at its core, even when referring to Utah’s Dixie.

That said, maybe the pioneers who settled in the St. George area had the privilege of being blissfully unaware of the origin and were only thinking of their goal to grow cotton. Maybe. But regardless, DSU can’t use the same excuse.

Even if the term Dixie was introduced as a nostalgic reference to the local community, the symbolism used alongside it was clearly a reference to the Confederate South, not the St. George area. Minstrel shows, mock slave auctions, blackface, Confederate flags and a Confederate soldier mascot named Rodney Rebel have nothing to do with pioneer heritage or the Dixie Cotton Mission. Especially since the rebel mascot idea wasn’t introduced until 1951 according to DSU’s history page, which was in the middle of the Civil Rights Movement that spanned from the late ‘40s to the late ‘60s.

This stained reputation isn’t exclusive to DSU either. The longer the local community denies Dixie’s origin and the offensive nature of DSU’s Confederate symbolism on the basis of pioneer heritage, the more willfully ignorant and offensive pioneers and the community look.

Consider this: Utah’s pioneers came here to protect their right to practice the teachings of the Church of Jesus Christ of Latter-day Saints, and the church itself teaches that “the Church is made up of mortals, that priesthood leaders are fallible, and some may not always handle their stewardships with suitable sensitivity.”

So, maybe the pioneers who apparently named Utah’s Dixie are just fallible mortals and we shouldn’t cling to the term they adopted.

Stop doubling down and using pioneer heritage as an excuse for ignoring Dixie’s historic ties to the Confederate South and racism. The only way to look and be good going forward is to at least acknowledge mistakes made and stop shifting the blame, even if DSU and other local organizations don’t choose to rebrand.