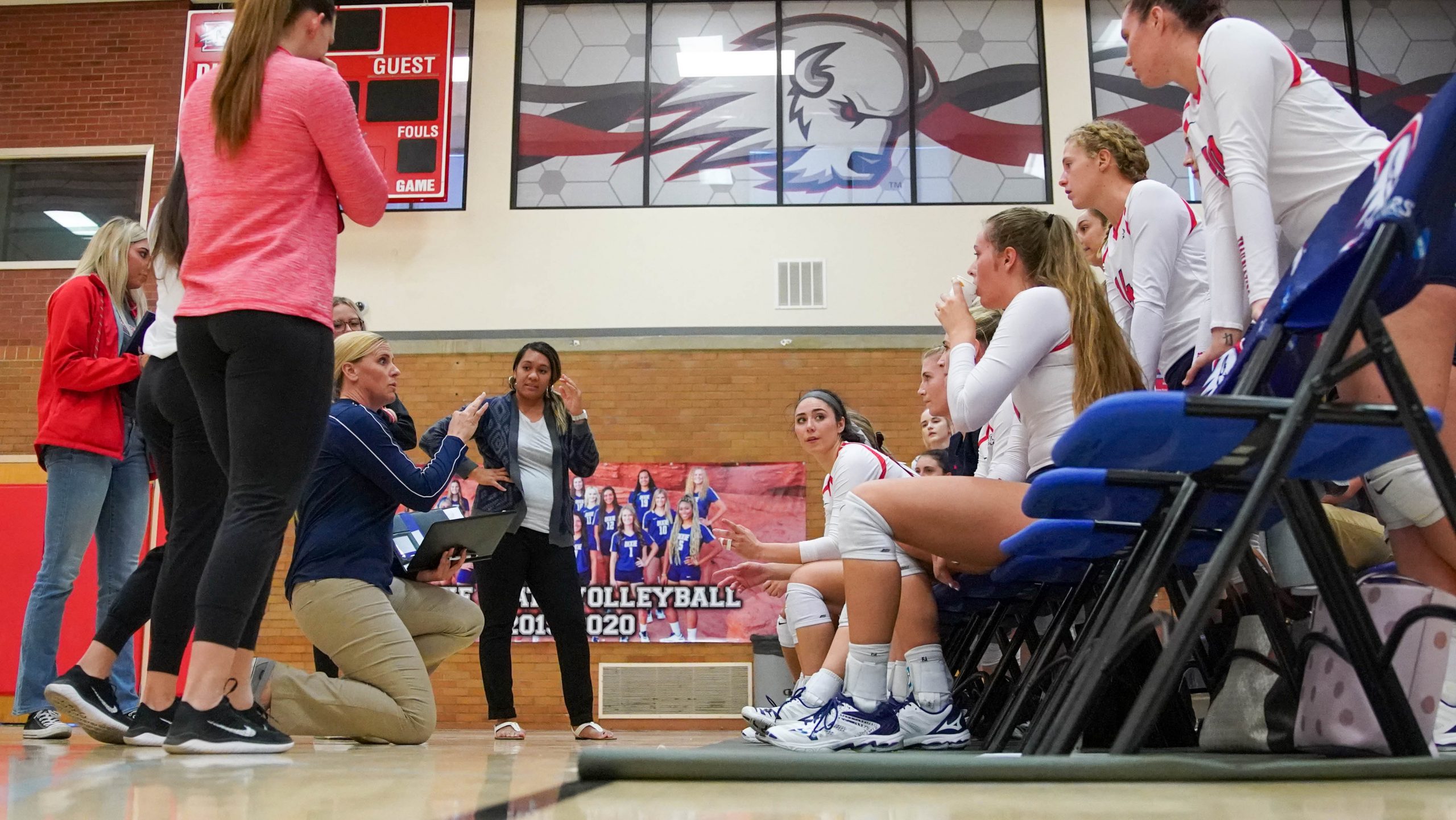 DSU volleyball head coach Robyn Felder said it's important to teach her team not only volleyball, but life skills too. Women's sports coaches agree that women's sports should be greater emphasized throughout campus and around the world. Photo courtesy of DSU Athletics.

Dixie State University has nine women’s sports teams, yet their success is something not well publicized on campus.

Women’s sports on campus aren’t the most well attended or talked about, something DSU women’s soccer head coach Molly Rouse said she wishes would change, not just at DSU but in the rest of the world.

“We hear a lot about, ‘Oh, the attendance isn’t great for women’s sports and we can’t put them on TV because who’s going to watch,’ but we haven’t really – as a sports society – actually committed to creating that equal opportunity yet,” Rouse said. “People being outspoken about their support is most important to get us to that place where we eventually have that equal opportunity for attention, promotion and marketing for women’s sports.”

For Rouse, she said it’s about recognizing that her athletes are working just as hard and are just as competitive as anyone else. They deserve recognition for that, which is a belief women’s swimming coach Tamber McAllister echoed.

“Whether they are boys or girls, [fans] can be inspired by athletes doing amazing things, and that’s across the board what college athletics is about,” McAllister said.

Inspiring fans is important to McAllister, but for her and other DSU coaches, it’s also about creating an environment that empowers their athletes to pursue opportunities both inside and outside their sports.

Rouse said: “If you’re passionate and you’re willing to wade through some really good experiences and some not so good experiences to ultimately be able to impact people, there’s a way for you to get there.”

“If you’re passionate and you’re willing to wade through some really good experiences and some not so good experiences to ultimately be able to impact people, there’s a way for you to get there.”

Rouse said she was inspired by her female coaches during her playing career, and she hopes to do the same for her team while helping them realize there’s no right or wrong way to make it in coaching or a professional playing career.

Rouse emphasized the importance of not trying to follow any “traditional” path. Rouse and her two assistant coaches, Jennie Clark and Lindsey Dare, all took completely different paths to get to DSU, which she said she wants to emphasize to her team.

“Whether it’s the aspirations to coach at the DI level, professional level, high school level, whatever it is, I think the more visible we can make these different tracks for young women available, the more we’re going to see expansion and growth of women in different leadership roles within the sport itself,” Rouse said.

DSU volleyball coach Robyn Felder said she is hoping her athletes can use the skill sets they have acquired from competing to help them in the rest of their lives, whether that’s in volleyball or not.

“In life, you’re going to have tons of good, but [also] tons of really hard things,” Felder said. “If you don’t know how to be resilient, how to have grit, and battle and fight to do things that are hard, then you’re not ready for life.”

While the DSU coaches are working on preparing their players on and off the field, court or pool, they want students to come and support their teams.

“The more that we can show support for the sport and for female sports in general, the more the attention is going to grow,” Rouse said. “The more there will be value assigned to investing time and money into promoting women’s sports.”

Rouse, McAllister and Felder all said they think gaining visibility and value for women’s sports will help not only their athletes, but also their sports. Rouse said she believes paying attention to women’s sports at every level is essential, and supporting fellow students who play them especially.