DSU men’s soccer is young, ready to shock the WAC 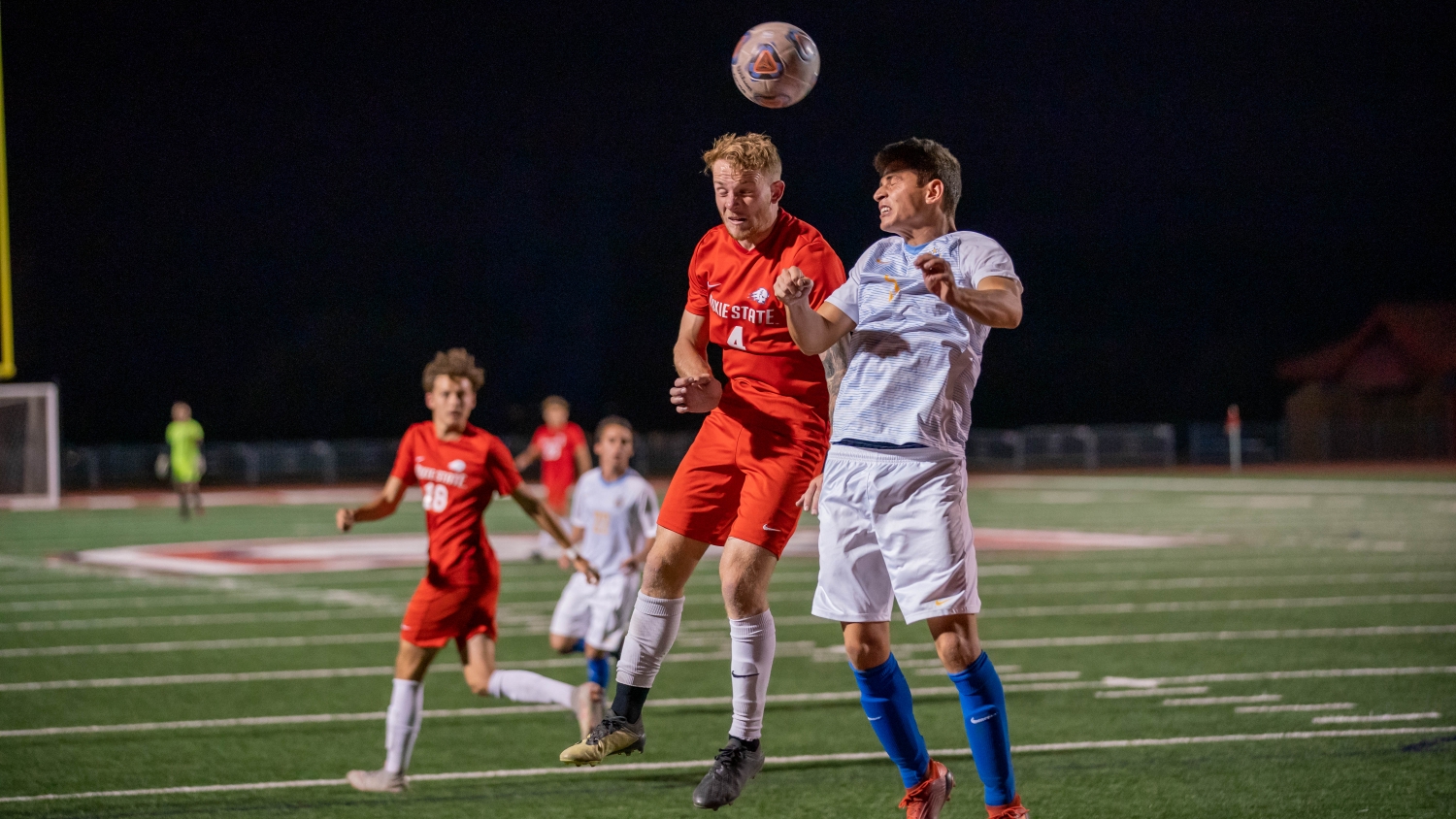 DSU men's soccer looks forward to a 2021 season. Defender Matt Lockwood, a junior nursing major from West Jordan, says he is ready to head back on the field with his "new team." Photo courtesy of DSU athletics department.

Expect to see familiar faces with the Dixie State University men’s soccer team, as 20 players are returning to the teams roster for a potentially promising 2021 season.

Head coach Jonny Broadhead said the COVID-19 pandemic has put a little dagger into the team because the younger athletes who were key contributors last season decided it was not safe to return to campus. Despite the dent to the roster, Broadhead said it will be good for the team when the young key contributors come back to DSU because the underclassmen had impressive performances.

“I look at film [from] last year and I can’t tell you how many games the starting lineups had seven starting freshman and the whole back line were freshman and sophomores,” Broadhead said.

The Trailblazers went 11-8-1 overall last season with a 9-5 conference record. DSU made a Rocky Mountain Athletic Conference tournament appearance and made it to the semifinals. With a solid campaign last year, the Trailblazers made a big splash in recruitment last spring to add reinforcements to the team.

Defender Matt Lockwood, a junior nursing major from West Jordan, said there are 13 newcomers this year which makes a “new team” for DSU.

Lockwood said, “We were a young team last year and we lost two key seniors, so we have to make up for that, and the returners have to step up [and] help the freshman [and transfer students] understand what kind of culture that we’re trying to take with us into the [Western Athletic Conference].”

Midfielder Idris Alabi, a redshirt junior biology major from Vail, Arizona, said trying to build team chemistry is different this year because the pandemic made it more difficult for teammates to get to know each other better.

Alabi said: “We were able to go play mini golf with the [team] last weekend which was pretty fun. It’s helping with chemistry, but we have to build it across the semester.”

Broadhead said the main focus on the field is to ensure everyone is on the same page when it comes to how the team plays. The focus off the field is to keep the athletes safe.

“[I’m] constantly reminding the guys the risk you take and it’s a lot different from other years, but it’s tough man because these are kids and they’re getting robbed of their normal experience, so I try to be compassionate about that as much as I can,” Broadhead said. “There’s some things to look forward to and reminding to focus on; we’re limited on our hours now, but it’s important to utilize [our hours during the week] because I think we can make something happen in the spring and get something out of the year.”

The Trailblazers are the new kids on the block transitioning to Division I and coming into the WAC. Lockwood said the team would definitely be under looked because they’re coming from a DII conference and nothing is going to come easy for the freshman, transfer students and returning athletes.

Broadhead said he believes everybody has got a bit of nerves being the new team coming up from DII. Broadhead continues saying on paper they’re the underdog every game, no one expects them to do anything special, and other teams expect DSU will make this a learning year; however, his team wants to surprise the WAC.

Broadhead said: “They’re going to learn a lot and they know they will, but they’re not here just to learn a lot. They’re here and they want to win. They don’t want to slowly come in, learn and take some loses; they won’t accept that. Their focus is like ‘we’re just as good as anybody else until we’re proven otherwise.’”

Lockwood said he’s thrilled to have the opportunity to go to new places, schools and play in front of bigger crowds with the jump to DI.

“Overall, the experience is going to be heightened and with that comes all of pressure everyone wants to play in front of a huge crowd, but when you’re the away team it isn’t the easiest thing to do,” Lockwood said.