OPINION | Counter-protesters are not helpful 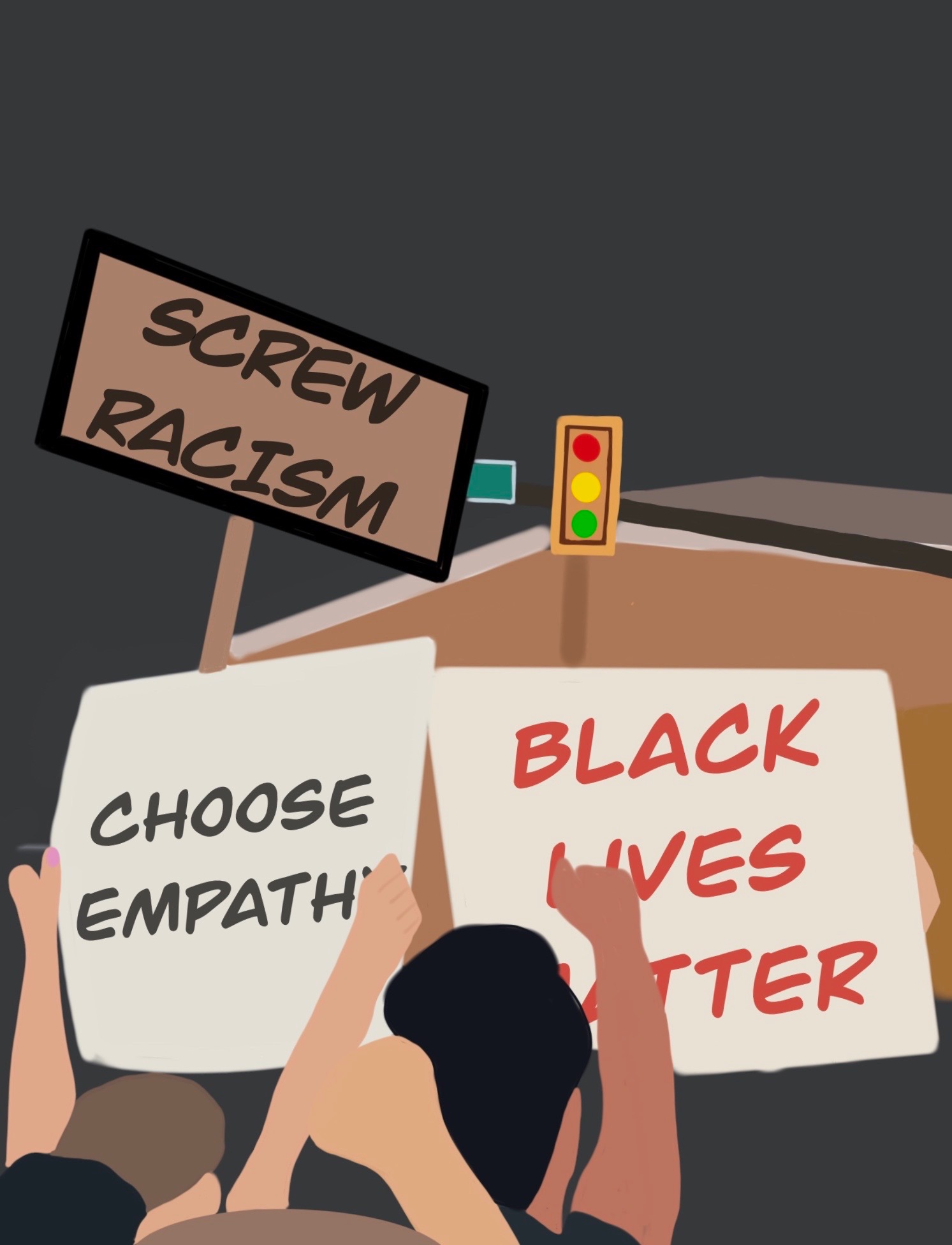 Black Lives Matter protesters and counter-protesters—All Lives Matter and Liberty Action Coalition—lined the streets of St. George late August. Arielle Cabrera said, "We should protest peacefully and not show up with the intention to intimidate." Graphic by Breanna Biorato.

Everyone has the right to speak their mind and express their views; however, this does not include verbal assault or intimidation, which is exactly what some counter-protesters are doing.

The two groups outnumbered the BLM protesters by the hundreds. A rumor started on Facebook that claimed buses of Antifa members were coming, so the counter-protesters came to “protect their city” saying “rioters would not listen unless they were armed” the counter-protesters told St. George News. These rumors turned out to be untrue.

The protest allowed for St. George citizens to support their views but in the wake of it, several incidents that occurred were only heightened by the visible guns and aggressive attitude of the counter-protesters.

Protests are meant to be a peaceful assembly of like-minded individuals who want to see change, not this sort of fear filled event where being shot is a high possibility for anyone who disagrees with the larger group.

The counter-protesters were holding “Trump2020” signs as well as many Confederate and American Flags. As this was originally a BLM protest, those who attended the counter-protest were generally Trump supporters and against several points like de-funding the police and anti-masking.

With over 400 people at the event, the spread of COVID-19 without masks would be significantly higher. So not only did the counter-protesters come to intimidate but also presented a risk to other protesters’ health.

Some counter-protesters even threatened rape to an individual who attended in support of the BLM protest, a few BLM supporters said.

Brooklynn Gallacher, a freshman social studies major from Farmington, said: “A group of guys came up to me and I told them to leave me alone and they started saying ‘white power,’ so I started talking back to them. Then I was told by a woman that she would hold me down so I could get raped in my mother’s basement.”

Whether you disagree with someone or not, there is no excuse to harm residents and verbally or emotionally abuse others while claiming to protect the city. This was not a stand alone incident either for other BLM protesters.

A Caucasian couple—who are friends of mine—was supporting the BLM protest and was followed back to their vehicle by counter-protesters three blocks away from the protest.

Similar to the way that differing viewpoints could lead to silencing an entire group, this action was on par with attempting to silence the BLM protesters.

Civilians are not trained to de-escalate situations the way law enforcement is. If anything, the Liberty Action Coalition and All Lives Matter protesters added stress to the police because they had the ability to open carry. There would have been a lot of danger to the public because of the amount of people carrying guns and the possibility of getting shot.

St. George has had no riots even during the height of protests during the summer, and despite that, the counter-protesters anticipated Antifa buses to show up and wreck their city based on only a rumor. Rumors should never be a reason to jump to conclusions as they can be false.

“Whether you disagree with someone or not, there is no excuse to harm residents and verbally or emotionally abuse others while claiming to protect the city.”

Since this rumor originated on Facebook, there is not a lot of credibility. According to a St. George News article, the police department posted on Facebook saying it received several phone calls regarding this rumor; however, it was baseless and in pure speculation, since no one showed up.

Though there are no laws against open carry in Utah, a group armed with guns would make anyone feel unsafe and intimidated to speak out for their beliefs, which is a First Amendment right. Intimidating another group with guns and verbal threats is on par with silencing them.

The armed citizens combined with verbal assault made their protection of the city pointless when it only scared more of its citizens from protesting in the future for BLM.

We should not support these groups who will resort to these kinds of silencing tactics and intimidation methods. We should protest peacefully and not show up with the intention to intimidate. We all have the right to speak our minds without fear of being shot.