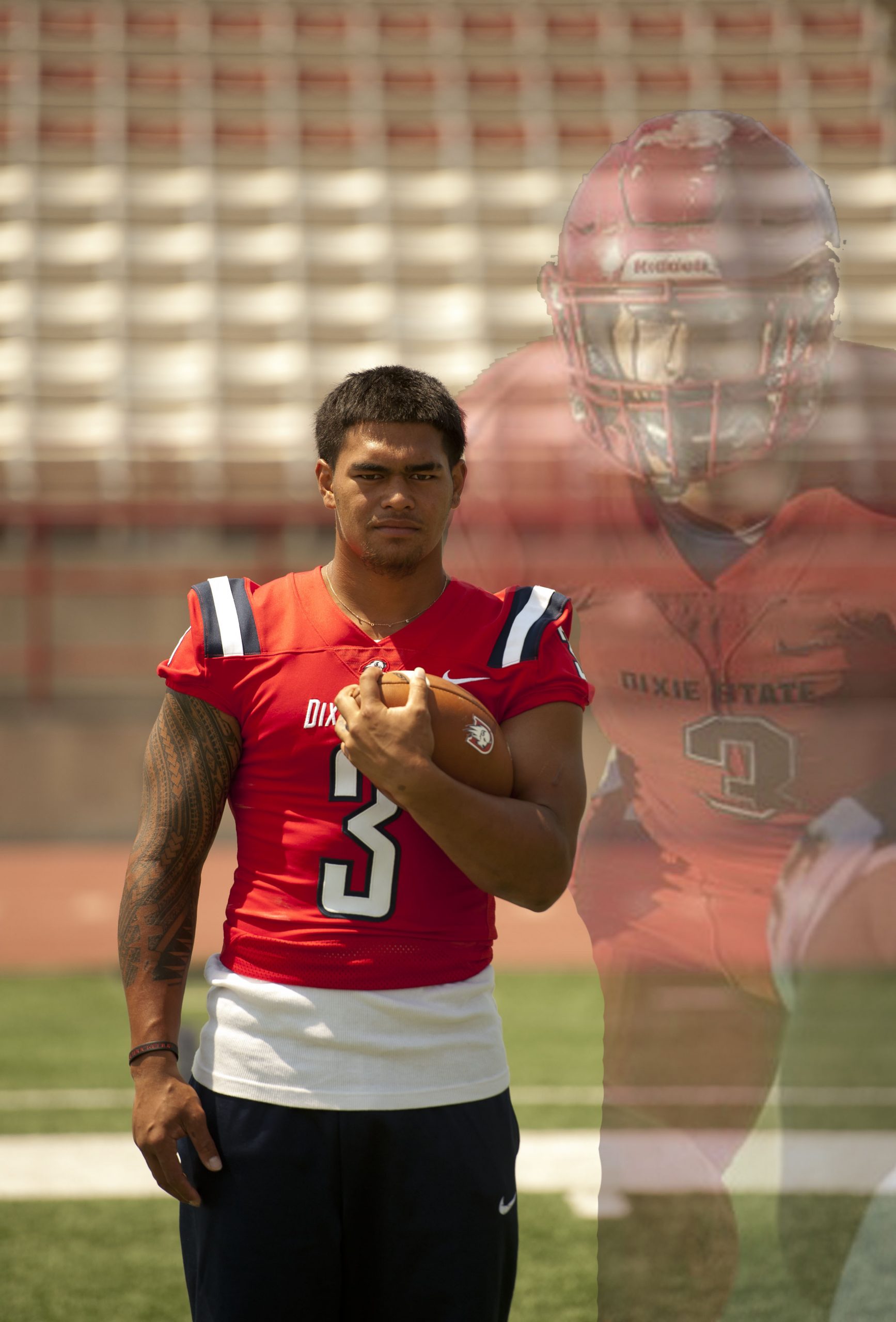 For the first time since the 2018 football season, D’Arman Notoa, a senior sport and recreation management major from Orem, puts on the No. 3 jersey. He wears this jersey proudly, honoring the memory of Abraham Reinhardt. Photo illustration by Tianna Major.

D’Arman Notoa never knew Abraham Reinhardt personally, but now it’s his job to show the next class of Dixie State University football players what No. 3 means.

Reinhardt was a linebacker for the Trailblazers football team who passed away in March 2019. Football head coach Paul Peterson said instead of retiring the No. 3 jersey, someone wearing and representing it would bring justice and be the start of something special.

“The person that wears it is always a representative of Abraham and what he stood for,” Peterson said.

Peterson said toughness, hard work, trust and accountability are the four principles his team is based on. Reinhardt’s legacy and jersey number fit all those categories, and the football team wanted to honor him because it was fitting. Peterson continued saying the No. 3 jersey would be awarded to a student-athlete who perfectly fills those principles, and Notoa, a senior sport and recreation management major from Orem, exemplifies all of them.

“[Notoa is] a guy who’s going to come early, stay late, does extra; he’s tough, does everything we ask him to do and he’s a great leader,” Peterson said. “We talked about it for one second as a coaching staff, and we were like ‘D’Arman [Notoa] – he’s the guy who we want to have represent what we’re trying to do and build here.’ So, it was an easy choice for us.”

Running back coach Peter Tuitupou said Notoa leads by example, and everything he tells his teammates to do he’s doing himself.

“There have been times where I would have to tell him to get off the field to make sure he stays fresh because he’ll [put in the] work,” Tuitupou said. “Credit to him and the way he was raised – he knows how to work. Hard work is in is DNA.”

Notoa played in all 11 games last season for the Trailblazers. He rushed for 308 yards on 75 carries and three touchdowns. Notoa caught 16 passes out of the backfield for 124 yards and had one touchdown.

Notoa said he was shocked when Peterson talked to him about it the day before he received the jersey two weeks ago.

“I didn’t think I earned or lived up to it yet, but it was an honor to be chosen in that category to be representing Abraham,” Notoa said.

In Reinhardt’s only season at DSU in 2018, he earned first-team all-Rocky Mountain Athletic Conference honors at linebacker after he led the Trailblazers with 79 tackles, 47 solo stops and co-led with 13.5 tackles for loss.

The basis behind honoring the memory of Reinhardt is a story that Peterson knew about at Montana State University.

The Bobcats have a tradition dating back to 1983 where they award a student-athlete the No. 37 jersey. The number symbolizes the spirit of Montana: hard work, dedication to the team and tough play. Whenever a student-athlete wears the No. 37, they are highly thought of. Peterson wants to do something similar to MSU’s tradition.

Peterson said: “If you want to see what it’s supposed to look like, all those leadership principles, then you follow No. 3. We wanted to be something that will stick forever and whether I’m here or not that No. 3 will be a special prize to be able to be worn to represent what Trailblazer football is forever.”

Even though DSU’s football 2020 season has been postponed due to concerns with the COVID-19 pandemic, Notoa said it would be scarier going into games with the No. 3 jersey because of the pressure of not living up to critics’ expectations; however, he still has a positive mindset if there are games to be played this season.

Notoa said: “A lot of people have talked to me about [wearing the No. 3 jersey] like, ‘What if you mess up or ruin that number?’ I think if I just go into the game thinking my same mindset [and] doing what I do during practice, I’ll be fine.”