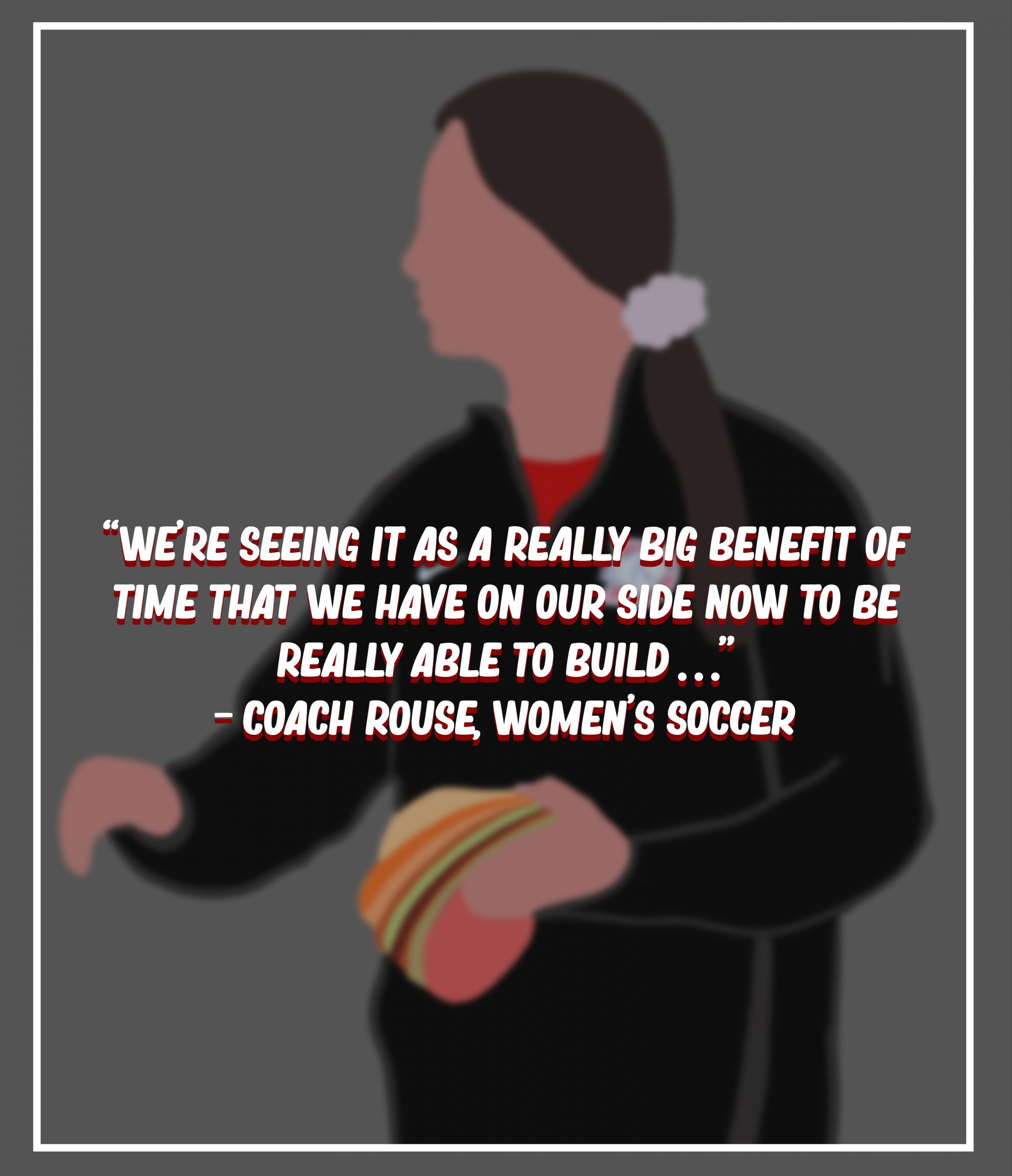 The women's soccer team is making the best out of the suspended games this season. Head coach Molly Rouse talks about the team's plan to improve its style and culture this fall. Graphic by Breanna Biorato.

After the Dixie State University women’s soccer team had the most successful season in school history in 2019, it didn’t have many unanswered questions. Now, new coaching staff, a suspended season and the jump to Division I have created a great deal of unknowns for the team.

Newly minted head coach Molly Rouse said she has no doubt that her team is ready for the jump to Division I soccer.

“[The DSU women’s soccer team] has a really awesome mentality of not letting anybody think they’re not as good as they are,” Rouse said. “They believe in themselves, and they believe in each other; they want to prove that they are meant for this level.”

This is Rouse’s first year as a collegiate head coach. Prior to taking over DSU’s program, she played collegiately at the University of Minnesota and professionally for the Minnesota Kings and Vancouver Whitecaps of the Women’s Professional Soccer League. Rouse has also been the assistant coach of five Division I programs, one of which was her alma mater, the University of Minnesota, where she coached two seasons.

Rouse and assistant coach Jennie Clark coming to DSU make the fourth coaching staff for the university in four years, but the class of 2021 has taken the new coaching staff and suspended season in stride.

Forward Jill Bennett, a senior fine arts major from Salt Lake City, said while she was bummed to find out her season was suspended until the spring, she’s excited to get more time to develop under the new coaching staff. The team has the entirety of fall to prepare for the spring season and increased time with its new coaching staff.

“I’m stoked to have an extra season to play soccer and get to know the coaches more,” Bennett said. “I think we’ll be better prepared for the hopeful spring season that will happen.”

Rouse and Clark echoed the same thoughts and excitement about having more time to establish their team’s soccer style.

“Having two weeks before the first game was just not enough,” Clark said. “I think this buys us just a little time to help form our culture as the Trailblazers soccer team.”

She plans on using the additional time provided to not only ensure academic success but team success by creating an atmosphere where the team talks about their goals and success in the same way as one another. Rouse wants there to be no confusion of team goals and expectations.

“[The team members] have very high expectations for themselves already,” Rouse said. “It’s just a matter of ‘Can we form the same language? Can we be speaking in the same way about what we want to accomplish?'”

Rouse said while the team was ready to take on the WAC in the fall, the extra time to work together will be crucial. She said the team’s leadership and winners’ mentality is going to be what helps them make a splash in the WAC.

Rouse said while she has formally named forward Kelsey Cook, a senior business administration major from American Fork, as the captain, leadership comes from everyone on her team. Although Cook may have the formal title, Rouse’s expectation is that everyone on her team is a leader.

Rouse praised the DSU women’s soccer program for being notorious for rising to the occasion. She said a lot of people counted this team out because of the coaching turnover, but the players never let anyone tell them how good they were. Though Rouse’s team has seen its fair share of adversity over the last four years, the team has high expectations for itself to succeed in the WAC.

With the team returning all three leading goal scorers from 2019 – Cook, Bennett and redshirt Whitley Johns, a junior social science composite major from Gilbert, Arizona – the team still has the offensive firepower that carried it into the Elite 8 in 2019. Also, Adelle Brown, a senior recreation and sports management major from Birmingham, England, will once again be between the posts for DSU as goalkeeper.

The jump to Division I is undoubtedly going to be a challenge for DSU women’s soccer, but it’s one the players are excited about. Bennett specifically is looking forward to the opportunity to play Utah Valley University and hopefully start an in-state rivalry with the Wolverines.