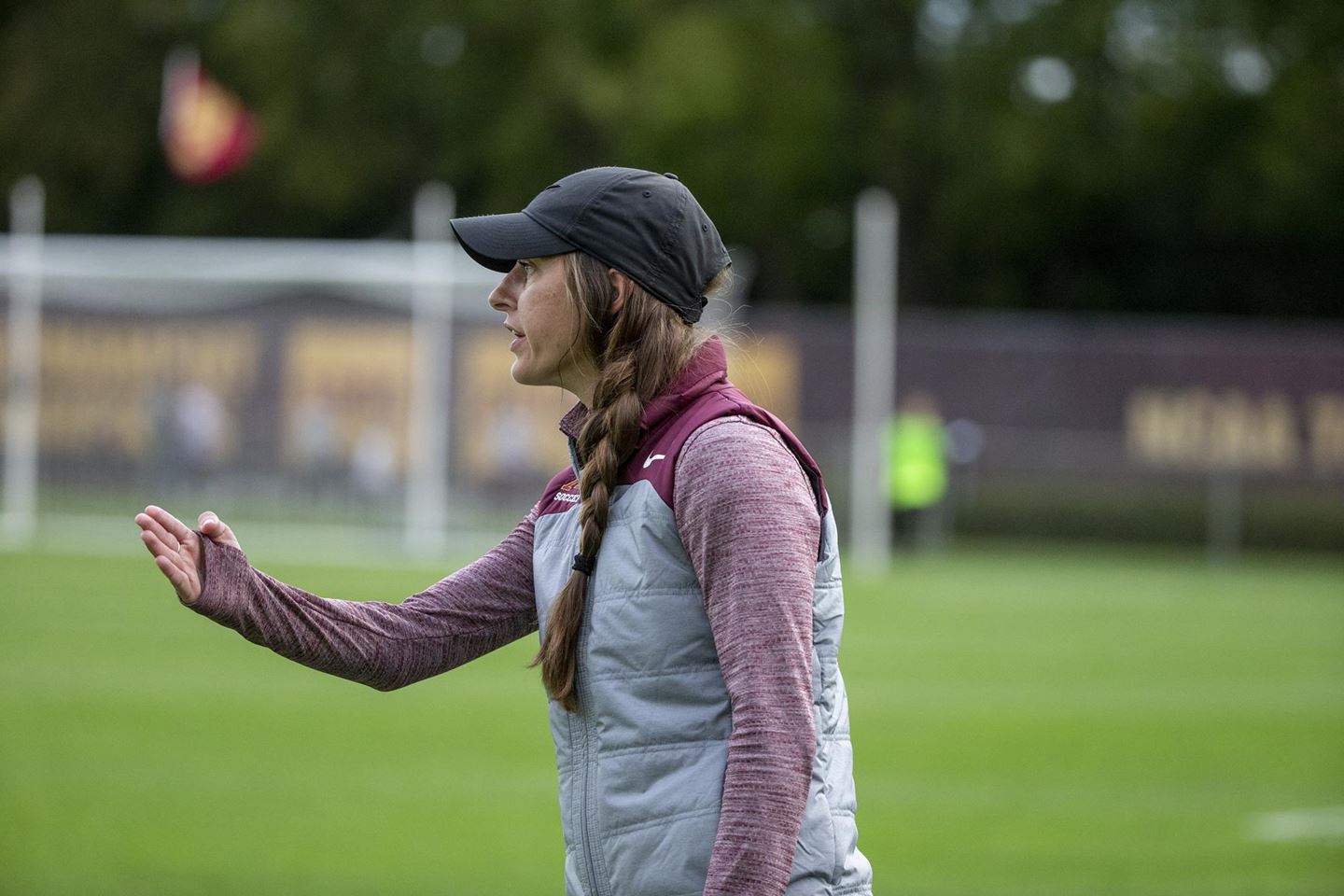 After a two month search for a women’s soccer head coach, Dixie State University found the perfect woman for the job.

The search began when Steve Golas stepped down in late February. Molly Rouse was officially announced as the newest member of Trailblazer Athletics on April 6. Rouse’s most recent coaching role was as an assistant coach at the University of Minnesota where she played as a student-athlete.

“Having the opportunity to come back and contribute to [the UM] program was something that I considered to be a once in a lifetime opportunity,” Rouse said.

Before coaching, Rouse played professionally for the Minnesota Kings and Vancouver Whitecaps in the Women’s Premier Soccer League. She got her first assistant coaching gig at Alabama State University in 2014. She continued this role at the University at Buffalo from 2015-16, the University of Nebraska at Omaha in 2017 and the University of Iowa in 2017-18 before returning to coach for her alma mater.

Rouse said: “I definitely felt like the mentorship that I’ve had in all of the different stops that I’ve been at had prepared me for the goal to be a head coach some day, which is something that I had been working for my entire career up until this point. So I wasn’t necessarily looking, but also was very open to any opportunities that came my way.”

For defender Jill Bennett, a junior fine arts major from Salt Lake City, Rouse will be her fourth head coach in her four years at DSU. She said the main challenge she’s noticed in having a new coach every year is the uncertainty of the program.

“For me, it’s my senior year, but I feel like a freshman because I don’t know how the program is going to be,” Bennett said. “With every year, there are players deciding if they’re going to stay or not because the coach is a huge part of that.”

Bennett said there is an up side to this: everyone on the team getting a blank slate and a chance to prove themselves every year. The team met Rouse for the first time through Zoom.

“She’s awesome,” Bennett said. “You can just tell she really knows soccer and I’m excited about what she wants to bring to our team and just creating a good culture for all of us. I’ve liked what I’ve seen so far.”

DSU Athletic Director Jason Boothe said this search was particularly different as it was the first time the university used a consulting firm to help them. With the help of Ventura Partners, the Trailblazers had an impressive pool of candidates to choose from.

“We had a phenomenal candidate pool that I had never seen in any other search where we hadn’t used that help before,” Boothe said. “We ended up interviewing eight people and over 60 applied.”

“She’s passionate, very experienced [and] she’s been at multiple Division I institutions working her way up in the coaching ranks,” Boothe said. “While it may look like she has jumped around all over the place, that’s what assistant coaches have to do to get their experience and work into a position to have this opportunity. So that didn’t scare us at all, it actually strengthened her resume in my opinion in getting the different levels of Division I.”

Despite the team’s frequent change in coaching staff, Rouse said the Trailblazers are already in a strong position in transitioning to DI.

“This is not a situation where somebody has to come in and completely overhaul the program, they already have a strong foundation,” Rouse said. “The thing I’m excited about is attacking this new challenge and new obstacles that are inevitable about changing division.”

Bennett said her biggest goal for next season is to make a statement in DI and show that DSU is ready for that level. In their final DII season in 2019, the Trailblazers finished with a 12-4-6 overall record, and went 2-1-1 in the program’s second-ever NCAA DII Tournament appearance.

“I am really excited to be a part of this program,” Rouse said. “They sound like amazing student-athletes, super committed, very resilient, have had a lot of change, but have embraced it every single time and have just gotten better in the process.”

Rouse said the three most important factors of a successful team are clearly defining the mission and vision of the program and getting everyone on the same page, laying out clear standards and expectations and having total buy-in from the team, and having a super competitive mentality and an awesome training environment.

For now, the team is on standby and waiting for the green light from the NCAA and hoping for improvement in the COVID-19 pandemic.