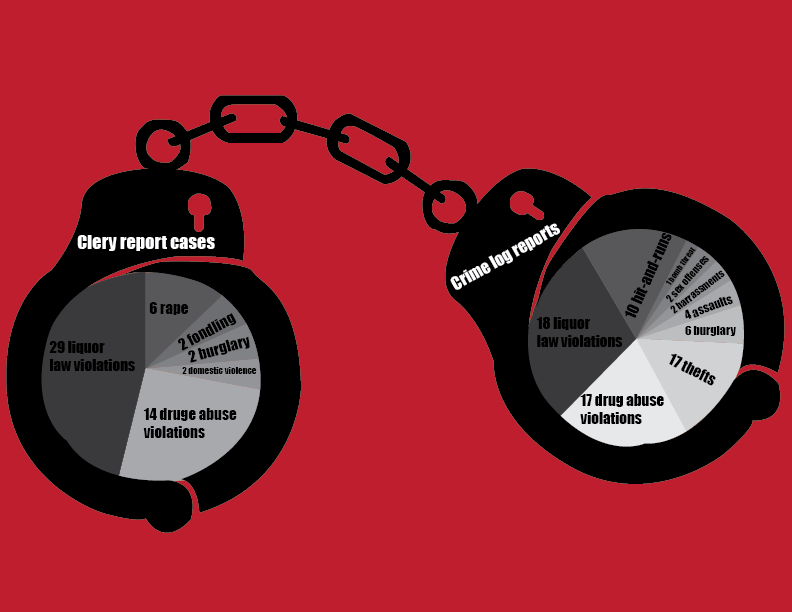 The annual safety and security report that all universities contribute to does not accurately portray the number of crimes that happen on college campuses.

When students and their parents are researching which schools to attend, they should be better informed about campus crime statistics. The information gathered about the crime needs to be represented in a clearer format than solely the clery report.

According to the The Handbook for Campus Safety and Security Reports, the clery report is strictly required to record any crimes under the categories of criminal offenses, hate crimes, VAWA offenses — any incidents of domestic violence, dating violence and stalking — and arrests and referrals for disciplinary action.

Due to the specific guidelines of what falls under these categories, not every report that should be included is included.

Chief of Police Blair Barfuss said determining what goes into the clery report has a lot to do with the geography of the incident. But just because the crime may happen two blocks away from campus, doesn’t mean it shouldn’t be included.

The clery report is set up to show the least number of crimes possible because it has so many restrictions on what qualifies to be included in the report.

We are shown the crimes on a microscopic level, which is doing a disservice to us students and our parents.

It’s the university’s job to relay this information to us in the most accurate format so we will see it.

The DSUPD is active on social media; it should use this resource as a way to better inform us of what crimes are happening around us and what we can do to keep ourselves safe.

The university could create another spreadsheet where it includes incidents from the crime log that don’t fit into the guidelines of the clery report but are still important to acknowledge.

Barfuss said for this to be an option, he needs engagement between the department, students and staff.

“Reporting numbers would be really easy for our records administrator,” Barfuss said.

It is possible for the DSU Police Department to compose more reports about crimes happening around campus — more than just the clery report once per year — but student associations need to be more involved in giving direction.