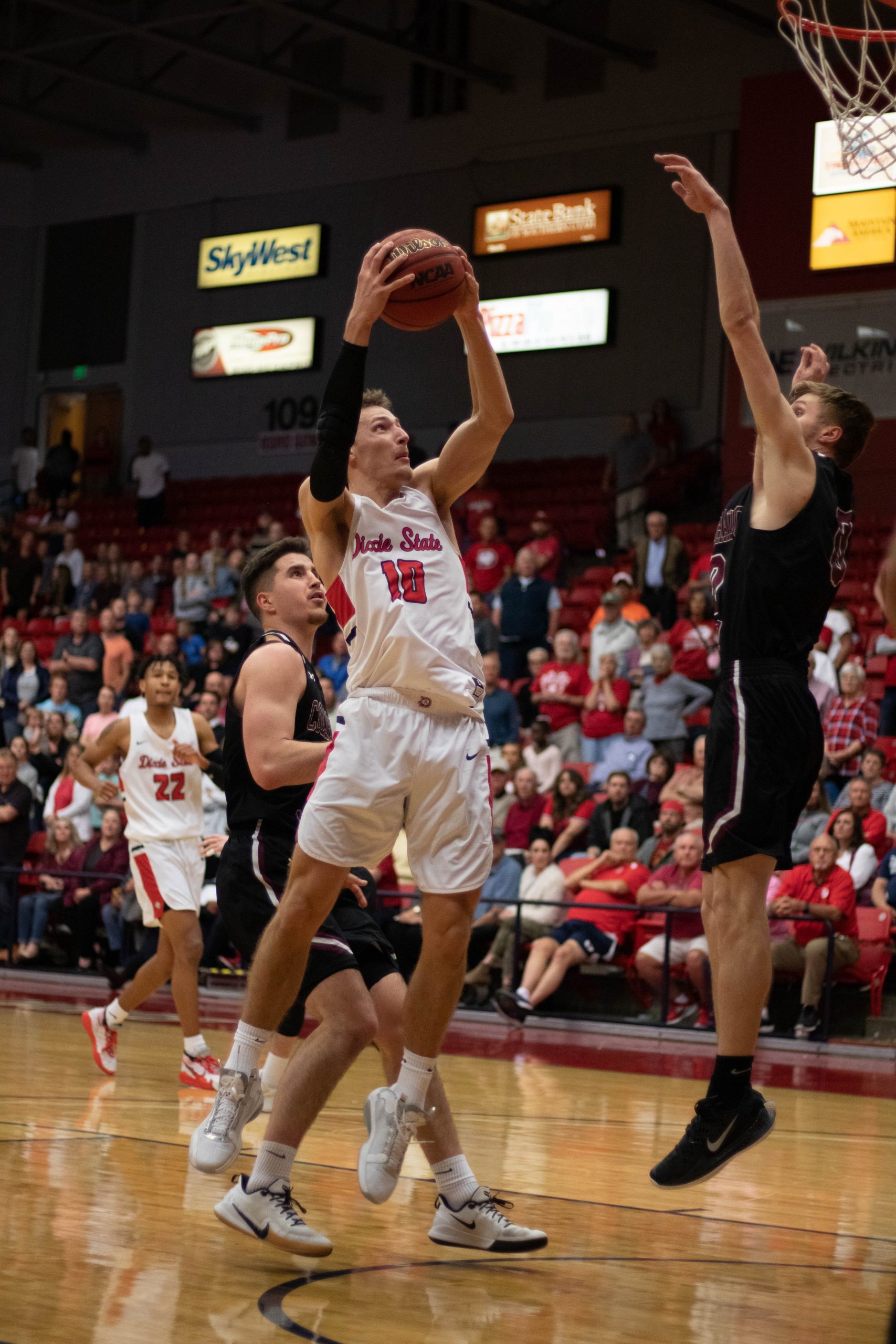 Jack Pagenkopf, a senior business administration major from Brooklynn, New York, goes for a two-pointer during the RMAC semi-finals on Mar. 7. Photo by Breanna Biorato.

With the 2019-20 men’s basketball season wrapped up due to COVID-19, Dixie State University blazed forward by scheduling The University of California Davis Aggies in a home series for the 2020 season.

The announcement of the scheduled series came on March 27. The first game is set to be at the M. Anthony Burns Arena on Nov. 14. The Trailblazers will then stampede to Davis, California, for a rematch on Dec. 2.

“We wanted to get some home games and UC Davis was willing to do home and home with us,” head coach Jon Judkins said. “It’s very exciting; [UC Davis] is a good team, but we are excited for the challenge.”

Members of the coaching staff said they are looking forward to next season as DSU joins the Western Athletic Conference and transitions to competing against other Division I universities.

“We are excited about the prospect of having a program that has been to the NCAA tournament before, under a great coach, Jim Les, [that is] willing to be our first [DI] home game,” assistant coach Andrew May said. “The scheduling process is one that has been underway since I was hired in the summer. … Talks with UC Davis started months ago among a host of different teams.”

DSU has yet to officially announce the rest of its full 2020-21 schedule, but plans on doing so soon. As of now, the off-season will have to do for the players and coaching staff as they realize the DI transition is happening sooner rather than later.

“When I first heard of the UC Davis scheduling, it got me more excited for next season,” said Dason Youngblood, a junior communication studies major from South Jordan. “I haven’t really thought about going DI because it has always been so far away, but now it actually feels like we are making the transition.”

Even though the Trailblazers were unable to compete in the NCAA DII tournament because of COVID-19, the team said it believes it is preparing well for next year.

“We only lost three seniors and added some nice new players, but we are going into a tougher league,” Judkins said. “We are really excited [for next season].”