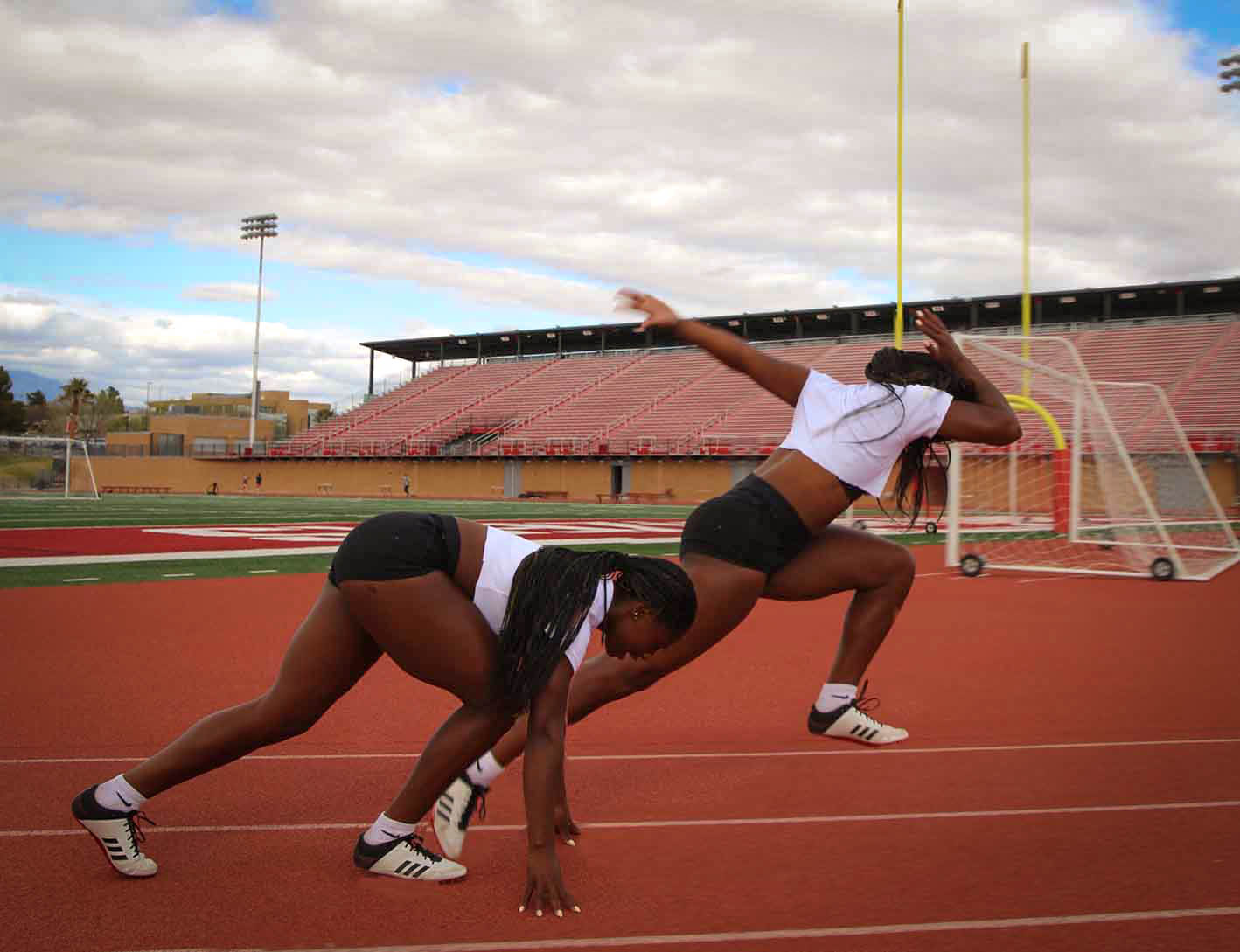 Starlee Woodbury, a junior psychology major from St. George, has a passion for running and competes on the Dixie State Track Team. She is the first Trailblazer to ever compete in long jump and had a second place finish. Photo by Jessica Johnson.

Before the Dixie State University women’s track team’s season came to an unexpected end due to COVID-19, a Division I transfer athlete quickly became a leader among the Trailblazers.

Starlee Woodbury, a junior psychology major from St. George, found her love for track in fifth grade. Her passion led her to become a DI athlete at Weber State University.

“My goal is to go pro in track,” Woodbury said. “That’s what I’m working toward right now and I definitely have the capabilities of it, for sure.”

Woodbury’s confidence in her passion comes from the time she dedicates to the sport.

“If we take any off days, there’s going to be someone out there who is working harder than we are,” Woodbury said. “For me, I hate that idea, so I work on Saturdays too.”

At the Rossi Relays in Claremont, California, DSU’s first and final competition of the season on Feb. 22, she became the first Trailblazer to ever compete in the long jump and had a second-place finish of 5.43 meters. She also set a new school record in the 100-meter hurdles with a time of 14.58 seconds. That performance earned her another second-place finish.

“My goal is to go pro in track. That’s what I’m working toward right now and I definitely have the capabilities of it, for sure.”

During her DI experience at WSU, she won the indoor conference two times in a row and had five freshman records. Woodbury said she left WSU because of financial aid restraints and asked for a spot on the DSU track team once she returned home.

She said, “I asked to be on the team and they were thrilled to have me. So, I was like, ‘OK, living at home and still getting to do what I love.'”

Woodbury said she thinks DSU is a perfectly sized campus and she really likes the classrooms and her professors. She said Gwyndalynne Romrell, a sophomore exercise science major from Riverton, who transferred from Ottawa University at the same time she did, quickly became her best friend on the team.

“It’s a good friendship because she pushes me in the classroom, but I push her on the track so we even each other out,” Woodbury said.

“She’s one of the fastest runners in our conference right now, so when we are doing any hurdle technique, she is the one our coach tells us to look at,” Romrell said.

Outside of track, the two said they are always hanging out together.

“Not only because she’s been to another DI school, but her work ethic is big for where we need to get to,” Goulding said.

Goulding said he told his team that when they enter the Western Athletic Conference they are going to be the team that “throws hand grenades into the fox holes of other teams” by trying to disrupt relays and pick up points in both the 100 and 400 hurdles as well as the long and high jumps.

“We probably aren’t going to be deep enough to get a ton of points, but we’ll definitely have athletes in the finals in a bunch of different events,” Goulding said.

Goulding said the recruiting is still in progress and they already have two or three short sprinters on their list from Utah, a couple from Southern California for hurdles and sprints, and an international athlete.

Woodbury said: “[Goulding] is so willing to work with you and so cheerful all the time. He wants you to succeed. I love how he trains and I love everything about what he does.”

Prior to the news of the season being canceled, she said her goals for the UNLV Invitational were to long jump 20 feet and to get in the 13-second range in the 100-meter hurdles.

Outside of her aspirations to become a professional athlete, Woodbury said she would love to become a high school track coach or a fitness trainer.

The DSU women’s track team will transition into preparing for its first DI season in the Western Athletic Conference come July 1.

Woodbury said: “I just love track. Really, truly. You’re running for seconds but you train for hours, and there’s just something about it that’s just so beautiful. I want to take it to the next level because I know I can. I just want people to know that I want it more than anybody. When you see me working out here on a Sunday, you know why.”