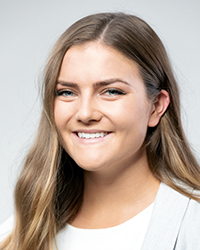 As Taylor Godfrey’s, a senior population health major from Buckeye, Arizona, term ends, it is important to look back and see what the past presidents have accomplished and who they are as people.

The past five student body presidents:

Godfrey said she believes that being elected came through sharing her story, my platform, and genuinely getting to know the students and their needs.

Godfrey said, she ran on wanting to enhance our University’s safety, service, and spirit.

“What I appreciate the most is the daily service that enhances the campus culture: the simple smile in passing, a genuine hello, holding a door for a classmate, and many more,” Godfrey said. “Our campus culture is what makes Dixie State University so unique.”

Godfrey said: “It has been an experience of a lifetime and I am so grateful for this past year. I have learned so much more about Dixie State and my love for this university has multiplied.”

Cajun Syrett, a senior communication studies major from Bryce Canyon said what he focused on most during his term was trying to unite the campus.

He started his term by talking to the ambassadors, the Multicultural and Inclusion Center, the Dixie Sun News, and attempting to establish clear communication with faces of DSU.

Syrett said these organizations are the leaders on campus, so it was important for him to have everyone support each other and set the example for other students.

Like many other previous presidents, Syrett’s election win wasn’t an overnight process. He has always been a part of organizations on campus and got involved at the beginning of his freshman year by joining Raging Red. He joined student government in his sophomore year and made his way up the ranks to vice president and then president.

Syrett said, “I tried to update students on anything that was going to affect them with policy changes and the [Human Performace Center].”

He said he focused a lot on transparency with the student body during his term.

Syrett said, “I want them [freshmen] to feel so comfortable here because they know the student body president and I felt like I was that person.”

Ezra Hainsworth a DSU graduate from St. George with a bachelor’s in communication studies in 2018 and works on campus as an admissions coordinator and recruiter.

Hainsworth lends a lot of the success during his term to his team.

“Any of the success that was done really wasn’t me,” Hainsworth said. “It was me delegating and being able to get the rewards from it.”

Hainsworth said a big focus for him was making sure students were heard.

“I had a lot of hard lessons I learned,” Hainsworth said. “But [my term] was an overall success.”

Hainsworth said there was a big transformation in his ego over his term. He said the original reason he wanted to become the student body president was to become the “it” guy on campus, but during his term, he realized there was a lot more to the position.

“I’m a people person,” Hainsworth said. “I grew up homeschooled and I was extremely shy in high school, but I got to DSU and said I was going to do this and then just kinda made it happen.”

Sarah Ramaker was in the first graduating class of the dance major at DSU in 2017 and continues her life with DSU by working as a student life coordinator.

Ramaker said: “I really tried to create a sense of togetherness on campus. It used to be where Surety Association of America, ambassadors and student government didn’t work that well together.”

She said her main focus was on mental health during her term.

Ramaker started the HOPE squad on campus and raised the student fee for the Booth Wellness Center.

Ramaker said one of the things she enjoyed most during her term was the opportunity to serve the school and its students.

“[Being student body president] taught me a lot about who I am and where my limits are,” Ramaker said.

Ramaker said the motivating factors behind her running for student body president were the support of the people around her and the love for the school. She said she isn’t one to pressure people into decisions and she wants people to feel good after she leaves them.

Matthew Devore graduated from DSU with a bachelor’s in integrated studies and went on to obtain a master’s degree in higher education from Louisiana State University. Devore continues his life at DSU by working as a resident life coordinator.

Devore said the biggest accomplishment of his term was being able to be a part of the rebranding process that happened in 2016.

“I think I was selected because of my passion,” Devore said. “I dove right into Dixie State University Student Association and I found a home in [DSU]. That made me feel a connection to [the school] and I want other people to have that.”

Devore said he struggle with school until he joined DSUSA in his sophomore year. He said that is when everything changed. He went from a 1.8 GPA his freshman year to getting 4.0s and ending up on the dean’s list.

“I understood that everything was changing because I found a connection,” Devore said. “Any student can have a different connection. It can be an intramural, a club or their major. Once they have that connection they are invested in the school and they have a love for it.”

Devore said he has a love and desire to make DSU a great place to come and be successful.