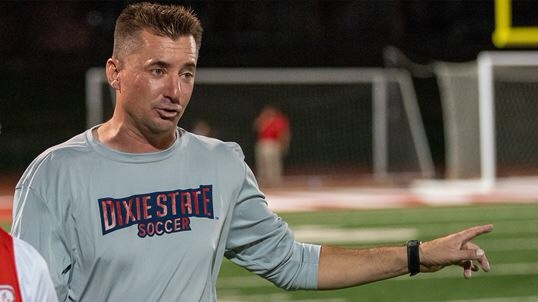 Steve Golas, former Dixie State University women's soccer head coach, stepped down from his position on Feb. 29. Golas and his team placed No. 8 in the country in Division II last semester. Photo courtesy of DSU Athletics.

The coaching carousel for the Dixie State University women’s soccer team continues to turn as head coach Steve Golas stepped down Feb. 29 after posting just one season with the Trailblazers.

“We stay focused on soccer and maintain our friendships,” said Sophie Steward, a junior nursing major from American Fork. “As each new coach has come in, we have stayed together as a family.”

Without currently having a long-term head coach on staff, the team will have to move forward, trust in themselves and trust the assistant coaches.

“It’s happened so often and –– as unfortunate as it is to say –– I think we have done a good job of a team of continuing to practice and keep our goals in mind,” Stewart said.

Paul Kimbrough was the assistant coach last year and is stepping in as the intern head coach for the DSU team as they continue through its spring practices and games.

“You never expect [your head coach stepping down to happen], even though it’s happened two times before this,” said Jill Bennett, a junior fine arts major from Salt Lake City.

Last season, the Trailblazers won the South-Central Regionals, and later finished in the Top 10 in the nation for Division II women’s soccer after falling short to Western Washington in the NCAA Division II tournament.

“We finished No. 8 in the country in Division II, so I want to think that’s a springboard point to be competitive this fall,” Kimbrough said. “We left off on such a high note, we don’t have to just stop and rethink everything at the drawing board.”

Continuing the success they had last year will be no easy task with the transition to Division I.

“It’s going to be a big transition to DI, but I just want everyone ready to work hard and have a good attitude,” Bennett said.

The Trailblazers will compete against Southern Utah University on March 7.

Kimbrough said they are looking forward to the competition.

“We came out here and started Jan. 11 for spring practices, so we went over two months just going at ourselves,” Kimbrough said. “It’s always good to get to the point where you are playing someone other than yourself.”